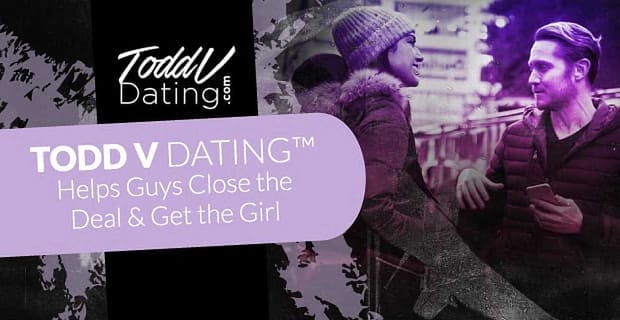 The Short Version: Whether you’re a guy looking for a casual date or long-term relationship, you need to know how to play your cards right. However, many smart, successful men don’t know how to talk to women, much less project confidence and highlight all of their attractive qualities. Todd V Dating teaches men how to speak to women more directly and get better results in the dating world. For more than a decade, Todd has shared proven conversational tactics that can help you find what you desire.

Most guys either have game or they don’t. As a single female, I often know what to expect from the moment I lay eyes on a man: Is he smartly dressed, or does he look like he just rolled out of bed? Does he come across tired and dull, or does he have an interesting spark in his eye?

But game goes much deeper than looks, and women assess men in many other areas. It’s good when a man approaches me because it shows confidence. If he makes me smile or think with his opening line, I might be up for a conversation.

Todd shows guys how to build confidence from within.

It’s always great when a guy shows interest in what I have to say and makes me feel special, but even if we talk deep into the evening, my brain is still scanning him for clues. At this point, I know he’s trying to pick me up, and if his game is good, and I feel the same way, it might work. Or I might thank him for the conversation and slip back to my friends — and maybe give him my number.

But, as a guy, how do you play it? Todd V and his fellow coaches at Todd V Dating have the answers. They’ve worked with hundreds of guys in individual and group sessions over the last decade to refine their approaches.

I’ve turned away so many guys who I’m sure were wonderful people, but they didn’t have the skills to get me in the taxi with them. Todd teaches guys the skills they need to put their best selves forward and, in the process, get the girl.

“There are guys who offer so much, but they were boring before and weren’t attractive. Now girls get the best of both worlds: They get an intelligent, stable, successful guy, but one who also doesn’t bore them and arouses them both emotionally and sexually,” he said. “It’s great for everybody.”

While he’s at the top of his game in the coaching community now, Todd started out in the field by accident.

“In high school and college, I was lost and confused in respect to what girls wanted and what made a guy attractive. I had an idea in my head from movies and my parents, but it wasn’t entirely accurate,” he said. “It wasn’t serving me, so I set out to figure out what was going on. In the process, I met people who were teaching, so I started teaching as a means of learning by experience. It was something I enjoyed.”

Soon he gathered a large clientele of men who were successful but struggled to talk with women in a way that portrayed them attractive and potential dates. Todd taught them the techniques and skills he learned to better his own dating life.

“A lot of high-quality guys have so much to offer but don’t know how to communicate their value to women,” he said. “It was a nice synergy to give me an understanding in that area and provide the advice those guys needed. It just worked out.”

Today, Todd’s clients range in age from their late teens to mid-40s. He works with guys who have no positive experience with dating as well as those who are divorced. Many of his clients have spent much of their lives creating successful careers only to realize that they never found the high-quality woman they desired.

“They think that if they get the right job and become successful in life, the right girl will just find them,” he said. “They have a job making good money and love it, but they sit in front of a computer all day and never talk to a girl. How are they supposed to meet anybody?”

Todd helps men learn the interpersonal skills they need to talk to women. He coaches them to build the confidence to approach a girl and earn her interest.

“You know the movie ’40-Year-Old Virgin’? I had a man just like that come to my program, and he had success. He went from being a 40-year-old virgin to getting dates — that is substantial progress,” he said. “Now he interacts with the world as a man and has had a lot of dating success.”

Along with a popular YouTube channel through which Todd answers questions that guys have about dating, he offers many different personal coaching options. The most popular — and effective — is one-on-one coaching with Todd or one of his team members. Sometimes the coach will take a client out to a bar so they can observe each other. Sometimes approaches are even taped to analyze in-depth later on.

“Typically, I motivate men by getting them to see their value. I don’t yell and scream at someone and force them to do something they don’t want to do.” — Todd V, Founder of Todd V Dating

“Typically, I motivate men by getting them to see their value. I don’t yell and scream at someone and force them to do something they don’t want to do,” he said. “But I do think it’s important that they get to the point that they want to engage in activities that are good for them.”

A more intensive, condensed coaching option is Todd’s seven-day Immersion Session, which includes a classroom curriculum and personalized attention. Just like scoring with ladies, coaching is never one-size-fits-all, he said.

Todd released a new program called The System, a step-by-step guide to everything from saying the first hello” to forming a lasting, loving relationship with someone.

“It’s an avenue to teach everything about life and how to become more confident. A lot of guys start to get good with girls, but then realize they need to get more fit. They see that they’re interacting with higher quality girls, and it motivates them to be a higher quality guy. Some may even go back to school or start their own business,” he said.

Todd helps clients understand that getting better at one thing is a process that may require improvement in other areas. Many of the guys he works with expand their understanding and confidence in many areas and Todd said he enjoys helping them improve their lives holistically.

Todd is also adding to his team. Soon he’ll be bringing on even more coaches on to help even more guys find — and get — the girl of their dreams.

“My coaches are friends with very different personalities and different lifestyles. They are amazing, inspirational and great at what they do,” he said. “And, hopefully, we can expand to touch and help even more people.”