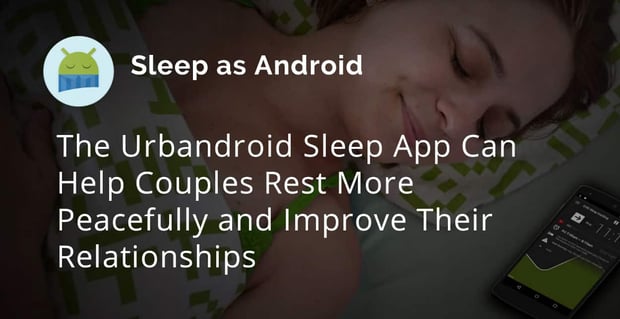 The Short Version: A bad night’s sleep can set you up for a foggy morning and an unproductive day. Couples who have trouble sleeping together because one of them snores or has other sleep-disrupting habits may set themselves up to have more fights simply because they aren’t well-rested. The Urbandroid app Sleep As Android uses the latest science and technology to help those couples improve their sleeping habits. The app can help users get quality rest, which can lead to better overall health and more peaceful relationships. Users can easily track their sleep through the app on a smartphone or by syncing a wearable device.

More than a decade ago, Petr Nálevka was pursuing a Ph.D. while working with patients who had schizophrenia. He used self-assessment questionnaires to research the precursors to schizophrenia and determine ways to prevent it. Something that quickly emerged from his research is that many of those who relapsed reported a decrease in their sleep quality.

Smartphones had just started to explode in popularity, and Petr wondered if there was a way to use that emerging mobile technology — and its high-tech sensors — to automatically track sleep. That way, he wouldn’t have to rely on what patients participating in the project told him to understand their mental states better.

Not long after he had that idea, he realized that an app to measure and improve sleep quality could benefit everyone — especially couples — who had an interest in caring for each other’s health.

Today, the app Petr created, Sleep As Android, is one of the most robust and trusted sleep apps available for Android.

“I did not expect that I would be spending 10 years with this project, but it’s been an amazing time,” Petr said. “We do a lot of research and are incorporating science from all over the world. Obviously, sleep is a building block of proper health and for the immune system. Sleep affects the performance of your immune system.”

So far, around 20 million people — including many couples — have used the app to help them overcome poor sleep habits. They also use it to address sleep behaviors that make the nighttime troubling for them and their partners.

The Sleep As Android app team has developed many features over the years, and the app offers so many tools that couples often need guidance at first.

Petr said that couples can use the app together by downloading it on each of their mobile devices. The app has a pair tracking mode that allows it to communicate between devices and differentiate the sleep patterns of each person. The audio sensor and accelermeter on the phone help the app create a picture of your sleep.

One of the most popular features of the app is its anti-snoring program, Petr said.

“Snoring is a big thing for couples because it disturbs sleep for one of the partners, typically,” he said. “This is helping, and some customers say that they can’t sleep with their partner without it.”

The app can offer tips to intervene in some changeable habits. For example, when snoring, a partner can provide a short wipe on the wrist or make a hissing sound to get the other person to stop.

Couples can also set sleep goals through the app to see how the changes they make improve the quality and amount of sleep over time.

“It’s the same as fitness or weightlifting. If you have a partner, it really helps. If you want to build sleep habits alone, you can — but it’s much harder,” Petr said. “If one of the partners is taking a more lax approach, the other can push harder and achieve the goals.”

The App Syncs with Wearable Devices

The app — available on Google Play — is designed to leverage the technology of a mobile device, but it also syncs with wearable trackers, including Fitbit and Gear.

When users have the phone nearby while asleep, the app takes advantage of the device’s built-in sensors. But the Urbandroid team also took things a step further by creating new technology that mimics SONAR (i.e. for fishing).

“We use that system with a microphone and speaker,” he explained. “We use a special chirping signal that measures the Doppler effect and how the sound is deformed by the movement of the people. That includes the movement of breath and the chest. You can see if the people are maintaining healthy respiration during sleep.”

The Sleep As Android app offers users a detailed look at their sleep patterns and restfulness.

Petr said that the people behind the app love working with and analyzing the data. They also enjoy figuring out how to integrate the latest technology to track a new element of healthy sleeping patterns.

“We listen to a lot of feedback from users since we’re doing this all for them,” he said. “From the beginning, support was very important to us, and we reply to the vast majority of emails.”

With the new SONAR technology, the team discovered a method of automatic sleep tracking that can occur throughout the night while only using a small amount of the device’s battery.
Sleep As Android also created a new smart light for the app. The technology is designed to track your sleep patterns and breath rate as well as serve as a soundless alarm.

Petr said the typical user of the app are males aged 30 to 40, but that information came from a beta test of users from years ago. He doesn’t know much about the users today, and that’s by design.

“We are obsessed with privacy, and the app is completely offline. If you want to send something online to another service, you have to opt in and install another app. It’s not part of the basic offering,” Petr told us. “So, we don’t have data from the entire community.”

Today, the team is doing scientific work on the changes in sleep patterns of people living in the countries that were among the first to see COVID-19 cases. Early research shows that people shift to their natural sleeping patterns and social jet-lag is getting much smaller.

“You could say that night owls are finally getting to their natural sleep rhythm,” Petr said.

Just like his early research work with people who had schizophrenia, Petr and his team are discovering that people have more success analyzing and improving their sleep if it is tracked automatically.

“At first, we aimed to make sleep more efficient and boost the productivity of our users,” he said. “But over time, we found out that isn’t the main issue at all. We have learned that the vast majority of the world sleeps very badly, and people don’t even realize that. Some even think of sleep as something that steals a third of their lives without bringing any benefits.”