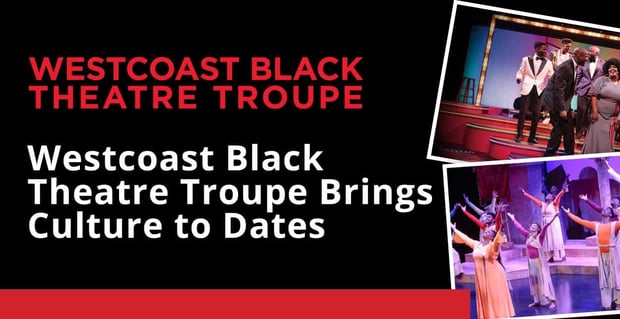 The Short Version: A couple of decades ago, it wasn’t easy to enjoy a culturally diverse theater performance outside of America’s biggest cities. That’s why Nate Jacobs decided to start the Westcoast Black Theatre Troupe in Sarasota, Florida, to highlight the talents of African-American actors. Today, the venue produces some of the best shows in the state. That includes outside shows where guests can socially distance while enjoying an entertaining date experience.

There wasn’t much cultural diversity in theater performances in Florida in the early 2000s. Nate Jacobs experienced that firsthand while working as a school teacher and moonlighting as an actor.

Nate noticed that he was one of the few actors of color, so he started asking producers and directors he worked with why they weren’t encouraging greater diversity on the stage.

“I heard, ‘Black people don’t audition for our shows,’ and I said, ‘Maybe you should do a variety of different shows.’ There was no interest in that,” Nate told us. “They were concerned about whether the regular theater patrons would support diverse shows.”

Westcoast Black Theatre Troupe was founded to promote diversity on the stage.

During that time, one of his mentors offered him an opportunity to teach performing arts at a traditionally Black school in his community. There, Nate found his gift for working with young performers on the stage, and his mentor asked him why he didn’t just create the kind of theater he had imagined. Ten years into his career, as he was sitting in a green room at another theater, he was inspired to launch the Westcoast Black Theatre Troupe.

Nate worked with a lawyer who was so impressed with his vision that he agreed to work for free. They drafted corporation papers, and he started tapping into his network for more help.

As a professional actor, Nate knew that Broadway was filled with wildly successful shows with Black casts and diverse subject matter. The Westcoast Black Theatre Troupe built on his passion for acting and teaching.

Nate also serves as the artistic director for the group, which offers some of the most diverse performances in the country. It was highly successful from the start, and people continue to flock to its Florida shows for date nights filled with groundbreaking stage shows and even outdoor experiences.

The Troupe Put Down Roots in Sarasota, Florida

Early on, Nate and his small team had found a theater in Sarasota willing to offer them Sundays and Mondays — the dog days — for performances. The first time he called an audition, no one showed up until the very end. That’s when one of his former students appeared willing to join the cast.

He found a few more former students, and together they put on a musical called “Cotton Club Cabaret.”

“We were a hit right out of the gate, but I struggled for 10 years to build a new theater in Sarasota,” he said. “The core community didn’t understand it. But the community who came to the shows loved us.”

Nate Jacobs has built a devoted following for his troupe’s performances.

The first 10 years weren’t easy. He struggled to find funding and began to think the idea was a little too ahead of its time. He even went as far as packing his bags to pursue his own singing and acting career. But something in his heart told him to stay and make his dream work.

That’s when another mentor encouraged him to hire an executive director to help shoulder the burden of all the work. Nate found a former banker from Sarasota who had a substantial network of people wanting to support his vision.

Together, they found a partner to donate office space in the heart of downtown and worked to pay off the $150,000 in debt the theater had acquired over the years.

Theater Thrives Thanks to Community Connections

Westcoast Black Theatre Troupe revamped its board of directors and began searching for a new theater location. Initially, they rented a portion of the old Mayflower Building, a historic structure in Sarasota at the corner of 10th Street and Orange.

When the theater was auctioned off, the troupe had a chance to purchase it for much less than they could have imagined.

“We paid it off, and this theater began to take off like a rocket,” he said. “It’s not fledging anymore; we’re here. We’re the miracle theater.”

Nate said that something that stood out was that both the white and Black communities supported the Westcoast Black Theatre Troupe. That was a rarity when he was growing up in Florida.

“It’s amazing to see my life where it is today and what can happen when the communities work together,” he said. “I never thought the white community would embrace us and see us as a blessing and gift. It is so important for one to follow your heart, gut, and instincts. You never know what impact you’ll have when you follow your dreams.”

It’s not just Black actors who grace the stage of the Westcoast Black Theatre Troupe. They hire a wide array of professionals from many cultural backgrounds, adding to the rich tapestry of artistic expression in Sarasota.

That makes everyone feel more comfortable, especially if the audience includes couples coming to the theater for a date.

“Now we have a sold-out house because I brought a new face to the west coast of Florida,” Nate said. “I’m glad I could contribute to the change.”

During the COVID-19 pandemic, Nate said he had to get creative to keep the stage lit. Some shows had to stop before their runs were complete due to health precautions. In response, he decided to move entire performances outside to the parking lot so attendees could practice social distancing.

He worked with the production crew to build a stage outside, set up portable lights, and created a sound system to recreate the feel of a theater. The result was incredibly popular, especially for a fresh date night experience.

Its first outside show was an all-male revue called “Light Up the Night!,” which featured the R&B hits of the 1970s. Currently, a female version of the revue, “Sistas in the Name of Soul,” has hit the stage — running through June 6 — featuring songs from female artists of the 1970s.”

Sistas in the Name of Soul are, left to right, Ariel Blue, Stephanie Zandra, Delores McKenzie, and Syreeta Shonteé. (Photo by Sorcha Augustine)

“We’re trying to stay as close to our devoted patrons as we can. They dance and laugh,” he said. “It’s wonderful to see and to bring that kind of joy, comfort, and peace of mind to our audience.”

The troupe recently rehearsed and filmed with a six-member, multicultural cast for “Pipeline,” a drama written by Black playwright Dominique Morisseau. They recorded the performance using three cameras, much like a movie, and showed it on the big screen outside at their parking lot space, for a one-week run. “Pipeline” is currently streaming for at-home viewing through May 23, Jacobs said.

Most of their patrons are couples but range dramatically in age. While the older audience remains loyal, a new batch of younger couples are trying it as a unique date option.

“Some of them don’t sit down the whole night. They cheer us on all night long,” Nate said.