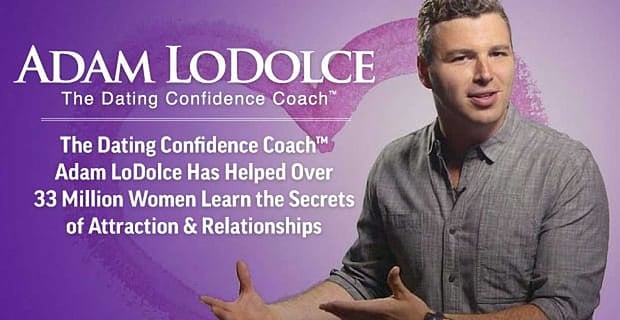 The Short Version: Frustrated with his own dating life, Adam LoDolce did some soul-searching, wrote a self-help book, and became a viral dating expert. Today, singles know him as the Dating Confidence Coach, a motivating and positive force in the dating industry with a loyal online following. Adam’s YouTube channels, particularly the one based off his Sexy Confidence program, have seen over 33 million views and counting. In concise and straightforward videos, the dating coach offers women insights into how to attract a partner, what to say on a date, and how to build confidence in any social situation. For women ready to take the next step and find love, the dating coach has developed comprehensive online courses that dig even further into important dating issues like getting someone to commit to you. Above all, Adam encourages singles to have fun, put themselves out there, and date with irresistible sexy confidence.

When he was fresh out of college, Adam LoDolce realized life was too short to be in an unhappy relationship. His girlfriend wasn’t the person he wanted in the long run, so they parted ways. That decision led him to have a crisis of confidence about his social life.

“We broke up, and I realized I had no idea what I was doing when it came to dating,” he recalled. “So I did what many guys do: I started reading up on it.”

He wasn’t impressed with what he found. Mainstream dating advice felt manipulative and inauthentic to him. Nevertheless, determined to find an answer to his dating questions, he began reading up on psychology and confidence, and then applying what he learned to dating. As a result, he pushed himself to get out of his comfort zone to meet new people, setting social goals for himself and seeing his confidence levels soar over time. His love life noticeably improved once he got comfortable in his own skin.

After learning from his own dating missteps, Adam LoDolce established a career as a dating coach and motivational speaker.

Hoping his insights and successes could help other single men, Adam wrote a book called “Being Alone Sucks!” to give upfront dating advice from the perspective of a single guy in his mid-20s.

He explained, “Ultimately, the book is founded on the core principles of getting out there, getting a lot of practice, learning from your mistakes, not being afraid to make mistakes, and stepping outside your comfort zone a little bit.”

Around the same time, Adam joined a college speaking tour and traveled across the country to inspire and advise students on life’s biggest issues. He spoke at over 60 universities in a year.

Adam had a talent for motivational speaking, so it was only natural for him to begin taking on male clients in one-on-one dating coaching. Over the years, he grew to understand modern dating dynamics and how important confidence building is to finding love. He became known as the Dating Confidence Coach.

Eventually Adam decided to take his coaching business to the next level and build a lasting online resource for singles everywhere. Instead of helping people one at a time, he wanted to advise daters, particularly women, on a much larger scale.

Today, Adam’s YouTube channels, particularly the one for the Sexy Confidence program, have surpassed 33 million views and impacted women all around the world. Adam didn’t stop there, though. In addition to producing tons of free content, this viral dating expert has designed comprehensive online courses for anyone looking to overhaul their dating lives. His brand as a dating coach has blown up because people are drawn to his encouraging, straightforward, and honest advice for modern daters.

“When you’re single, it’s such a great time to explore what you’re capable of, especially socially,” he said. “Once you’re in a relationship, things start to settle down, so I’m such a believer in taking full advantage of that time in your life and getting out there. And feeling good about yourself while you’re doing it.”

While Adam enjoys the immediacy of speaking live at an event, he finds it equally gratifying to speak to a virtual audience and know that his words have a lasting legacy on the web. “When I make a video, and it gets 2 million views, that’s amazing,” he said. “It’s so exciting to me because I know the video keeps going out there and reaching new people.”

Adam spends hours creating instructive videos full of relatable insights. He chooses salient dating topics, like signs he’s falling in love with you and flirty ways to text a guy, that he can explain by drawing from his experience as a dating coach and a single man.

If you like his videos, you can join his email list to get more free content, including advice and webinars. He makes a point to give out useful, constructive, and completely complimentary advice to his fans. “You could literally just live on YouTube and get all my stuff for free,” he told us. Adam’s goal isn’t to upsell singles but to help them understand the dating landscape and make positive changes in their lives.

“I like to keep it fun, playful, and engaging,” he said. “A lot of love advice can be very serious and almost intimidate people out of finding love. Sexy Confidence is about finding the fun in dating.”

Women from all over the world, and of all ages, come to Adam for guidance in their love lives. He said the surveys submitted by his YouTube audience and course participants show that his dating topics resonate with people of all stripes.

“The one binding factor is generally a lot women come to me because they’re struggling with confidence,” he added. “Whether they don’t believe in themselves or don’t believe they deserve love, they’re really drawn to the Sexy Confidence message that you should create a life you love first and then love will follow.”

His advanced courses go in-depth into important dating topics, including self-esteem, flirtation, social skills, and dating etiquette. His core program, Attract The One Academy, is a 10-week online course covering everything from what to wear to what to say to attract a long-term love. In detailed lessons, Adam not only teaches how to get a guy but also how to get a guy to commit and keep the spark alive in a relationship.

“It’s everything I have in my brain crammed into a 10-week course,” he said. “Attract the One Academy is the most extensive program I have. This is the one program that I believe will be the last one women need to take before finding love.”

Another course, the Casual to Committed Blueprint, walks women through how to identify and pursue men who are relationship material. The dating coach teaches women to keep a cool head throughout the dating process and not rush into the wrong relationship. As one dater named Brittney said, “It’s a wake-up call to not settle for the worst when I know I deserve the best!”

“If you want to live a happy life, you want to have a happy relationship,” he said. “I use the power of the internet to spread a positive message, and it blows my mind every single day how people are able to learn and grow so quickly.”

Using the Power of the Internet to Change People’s Lives

When he was working one on one with people as a dating coach, Adam enjoyed a front row seat to the life-changing improvements his help had on his clients. Now, as a YouTube sensation, his impact isn’t always so apparent, but signs do crop up now and then. Like the time a girl recognized him on a beach and came up to him to compliment his videos.

Adam is always happy to meet fans of his channel and hear their stories. Sometimes they come to him in person, and other times they reach out online. A 46-year-old Facebook user named Liliana wrote to tell Adam she got engaged after taking his advice to heart. “I never felt this confident before,” she wrote. “Adam opened my eyes to an exciting new reality. Thank you!”

“Words can’t even explain how much you have changed my dating life!” Kimberly commented on his YouTube channel. “I have soaked up… all of your advice, and I can’t wait for more! I love your sense of humor, too!”

“Adam talks about taking risks, exiting your comfort zone, and embracing the unknown,” said Greg in a review of “Being Alone Sucks!” “Something as simple as picking up his book has actually changed my life for the better.

“Adam gives great advice to anyone looking to be more social. This could apply to your dating life, your platonic situations, or any social interaction.” — A book review from an Amazon customer

Adam’s YouTube audience heaps praise and support on him in the comments section of his video. Women throw around words like “empowering” and “mind-blowing” in the comments below every video. He has racked up millions of views across his channel because daters appreciate his straight talk and upbeat advice.

While still in his 20s, Adam rebounded from a breakup by becoming a confident, uplifting, and dynamic dating expert. He saw how putting himself out there and gaining experience in different social scenes helped him grow as a person, and now he passes on those lessons to other daters facing a crisis of confidence.

Adam provides realistic feedback for women seeking to hone their dating skills and get themselves in a long-term relationship. His down-to-earth videos have gained a following of millions of viewers, and his in-depth programs have built the foundation for lasting change for people around the world.

“I personally believe that if dating isn’t fun, if you’re not enjoying yourself, then you’re not going to be successful,” Adam said. “The core of my advice is keeping it fun and approachable, rather than scaring the living bejesus out of people.”