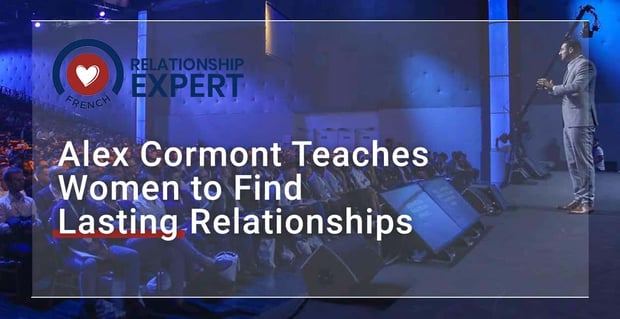 The Short Version: The city of Paris is known for its iconic architecture, decadent foods, priceless art, and romantic atmosphere. French Dating Coach Alex Cormont uses everything he’s learned from that culture and his education in social sciences and neuro-linguistic programming to offer relationship advice to women. His one-on-one coaching, online training, articles, videos, and other resources help women learn how to find lasting love by exuding confidence.

According to French Dating Coach Alex Cormont, women tend to make some crucial mistakes when it comes to finding love.

First, women who have been in the dating world for a while often start to see the experience as a daunting situation. They approach each date as the possible start of a long-term, meaningful relationship. According to Alex, that can be a critical mistake.

When singles are too serious, they may not be fun to connect with — and everyone wants to have a pleasant time. When first meeting a potential partner, even one who is very attractive, it’s important to remember that all good relationships begin with a friendship.

“You have to be very much yourself. Imagine your best friend, the person with whom you can truly be yourself,” Alex said in a recent advice video. “Have the same energy with the guy. Take it easy and let go. Enjoy the moment.”

Other women will move too fast in the relationship. According to Alex, they may be swooning over a guy on the first date, but they won’t differentiate themselves if they get intimate with him too early.

In fact, he said he encourages women to leave the first date after two to three hours. That way, she’ll be leaving the man wanting more.

Alex said the most significant problem is when women find themselves being needy, trying to please the man, or even chasing him. That’s not the French way — and most quality partners don’t find it attractive.

He said he enjoys teaching women how to focus on their instincts when finding a romantic partner.

“My type of coaching is trying to help them listen to their intuition and find their own advice,” Alex said. “There are exercises to help them find the solution themselves. I will give them an action plan, but it’s important that they find what they want to do and what is good for them.”

Alex earned his Master’s degree in social sciences, but he said he wasn’t ready to coach until he completed his first training in neuro-linguistic programming. While studying in France, he decided to start using what he learned to write a blog.

He focused on social and emotional intelligence and improving communication skills within relationships. He discussed how people could increase their charisma and confidence to get more dates.

At first, his writing was geared toward men. But he saw a significant niche since the people who tended to gravitate toward his advice were women.

“I was the first man giving advice to women in France, and that’s how it started,” he said.

Today, he coaches both men and women, and his videos have amassed more than 20 million views on his YouTube channel, 250,000 followers on Facebook, and best-selling books on Amazon.

He’s worked directly with more than 70,000 singles worldwide. Many of his clients live in the United States and France, as well as Dubai, Australia, and anywhere else where they “can understand my French accent,” he said.

He tends to coach women who are between the ages of 25 and 40. While some of his clients are students, most are professional women who have careers as doctors, lawyers, and other highly respected fields.

“The thing is, they struggle with men, their dating life, and their self-confidence,” he said. “When it comes to their personal lives and love, they just don’t know how to handle their emotions.”

His Coaching Style Focuses On Clients Discovering Themselves

Some coaches are happy to work with their clients for weeks, months, or years — after all, they’re getting paid. But that’s not how Alex approaches love coaching.

Instead, he meets with a man or a woman virtually once or twice, but rarely more than that. He doesn’t offer memberships or high-priced access tiers. Instead, he knows that the only person who understands what is best is the client.

According to Alex, when clients work with a relationship coach more than three or four times, they tend to start doubting themselves. They become dependent on the coach and talk more than they apply the skills and lessons they’ve learned.

Alex’s method has helped even those singles dealing with serious obstacles in their path to happiness in a relationship. For example, the first woman that Alex ever coached confided in him that she had been sexually abused when she was younger.

“I didn’t expect that or expect to coach so many women with abuse in their past. That was very rewarding for me because I helped her save the relationship with her husband,” he said. “Now, we’ve become friends. She is amazing.”

Single men and women can benefit from Alex’s expertise in other ways, too. He offers an informative blog and videos on his YouTube channel filled with relevant information for singles.

He also has a free ebook titled “Love Coach Confessions: The Truth About Love.” In the book, he shares the secrets he’s learned about how to attract the right partner and make them fall in love with you.

For people who want a more in-depth approach, he also offers online training sessions, including one that teaches women how to challenge men and keep their interest. Alex encourages women to return to the classic exchange of male and female energy and play the game of seduction in true French style.

“The success behind the methods I reveal to you do not depend on your personality, but on your behavior,” Alex wrote. “And that’s really the thing I want you to understand: behavior can change.”

Alex said that, in general, French women know the importance of not only looking their best but also presenting an air of mystery to keep men curious. Plus, the most attractive women have plenty of things going on in their lives and a lot to talk about. They never feel desperate for a man’s attention. And as a result, they receive it.

Alex said he loves watching both men and women improve their skills and behavior in love and find what they want.

“My job is everything to me. This is why I came to the U.S. This is why I learned English. I wanted to help as many people as possible,” he said. “I cannot do anything else now. It’s such a passion for me.”