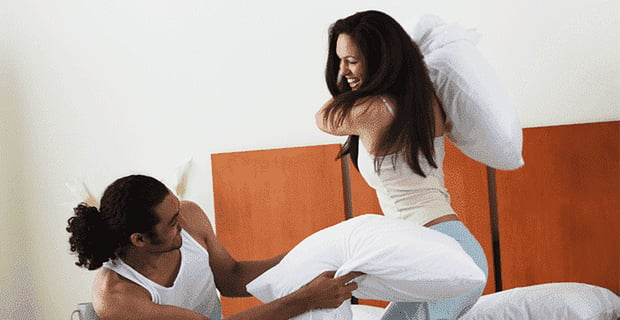 Are There Really Benefits to Friends with Benefits?

There is perhaps no grayer area of relationships than being friends with benefits. It may seem like the best of both worlds — all the fun and none of the commitment — but in reality, it’s more often than not the result of compromise and desperation.

Now, I’m not dissing the concept. When it works, it’s the best. It just doesn’t happen like it does in the movies. Or rather, it happens exactly the way it does in the movies — right up to the point where they end up happily ever after. That’s because there’s never that cinematic moment when both people turn to each other and say, “It’s YOU!” It’s usually just one person who has that epiphany and that’s when things get awkward. And no, there is no last scene where the other person comes to their senses and runs through the rain to find their true love.

Or, even worse, the whole thing begins because one of you harbors a secret love for the other. You fall into bed and, afraid of scaring them off, you overcompensate by insisting it didn’t mean anything. But now you’ve got your foot in the door, so you leave open the possibility of letting it happen again, hoping beyond hope they’ll realize just how much they love you.

has the same end game in mind, and the only way to be

sure is to talk to them about it.”

How do you think this situation is going to play itself out?

Here’s a hint: Not the way you want. That’s because you’ve given the other person no reason to see you as a potential partner. You know the saying, “Why buy the cow when you can get the milk for free?” It’s an outdated piece of advice when it comes to committed relationships vs. marriage, but it pretty much sums up an unbalanced friends with benefits relationship.

All that being said, there are certain couples who find success in that type of relationship, but when it comes to friends with benefits, “success” means you both get your rocks off and part as friends when it’s time to move on.

In fact, thinking about the “moving on” part is a good measure of whether you consider this person a friend in the first place. By the way, if you feel weird about bringing up other romantic interests with your “friend,” then guess what? They’re not your friend. They are the object of your misplaced lust, and the whole thing’s about to get messy.

You see, as in all real friendships, communication is key. You have to be as sure as you can be the other person has the same end game in mind, and the only way to be sure is to talk to them about it. Don’t fall into bed and sort it out later. As long as you both go in with your eyes open, it can be a way to scratch that itch. Anything else is an insult to the true benefits of friendship.

Christine has a savant-like understanding, respect and admiration for how men think.

Friends With Benefits: Is it Right for You?