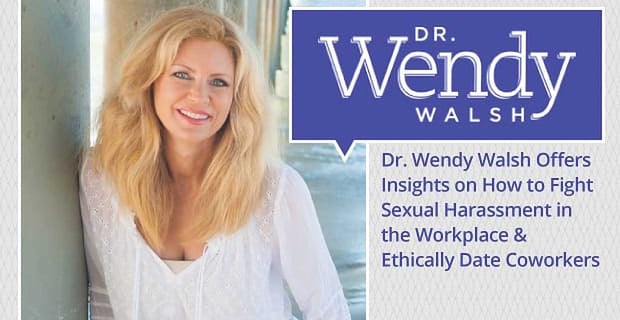 The Short Version: Sexual harassment is a hot topic impacting workers in service jobs, the tech industry, the political realm, and a variety of other career paths. Many courageous women have recently stepped forward to confront sexist work environments that feed on shame and silence. Relationship expert and psychologist Dr. Wendy Walsh became an advocate against sexual harassment in 2017 when she went public with accusations of sexual misconduct by then-Fox News host Bill O’Reilly. By telling her story, she legitimized the claims of other victims and encouraged countless others to take a stand when objectified, harassed, or bullied by the powerful. Dr. Wendy gave us some helpful advice about how to navigate dating, relationships, and harassment in today’s work environment to help make the workplace fairer and safer for all.

A college friend of mine was always an overachiever. She completed her homework days in advance, hosted study parties before tests, and graduated with a combined bachelor’s/master’s degree in accounting within only four years. It was no surprise when she snagged a position at a top firm by the time she was 22.

It was a surprise when she left the company after less than a year. I asked her what had happened, and she explained that she couldn’t stand the sexist work environment any longer. Her bosses and coworkers were mostly men, so she often received unwanted attention. She was fresh out of college and undeniably hot, but she was also a hard-working employee who refused to put up with anyone calling her baby or cutie at work.

Her experience is sadly typical for women in the workplace. According to a Cosmopolitan.com survey, one in three women ages 18 to 34 have experienced some form of sexual harassment at work. What’s worse, 71% of those surveyed said they did not report the harassment. My friend told me she gave up on reporting incidents when she saw no sign of repercussions or changes. She didn’t want to gain the reputation as a complainer or make waves with her bosses.

Victims of sexual harassment often feel pressured to keep silent for various reasons, but doing so only reinforces the status quo. Speaking out is an important first step to changing a work culture built on silence and sexism.

Nationally acclaimed relationship expert Dr. Wendy Walsh showed how powerful personal testimony can be in the fight against sexual predators in the workplace. In 2017, she spoke candidly and publicly about a business dinner she had with then-Fox News host Bill O’Reilly a few years earlier. He’d said he wanted to talk about her future as a contributor on his show, but his words turned sour when she rejected an invitation to accompany him to his hotel room.

“I feel bad that some of these old guys are using mating strategies that were acceptable in the 1950s and are not acceptable now,” Dr. Wendy said in a New York Times interview.

Dr. Wendy came forward to raise awareness about the pervasive nature of sexual harassment and has now become a high-profile name leading the discussion of how to improve the workplace and protect employees. Her on-the-record comments joined numerous other accusations and led to the conservative television host leaving Fox News.

Today, the relationship counselor has shifted her focus from general romantic topics to highlight how flirtation becomes harassment and how the employer-employee relationship can lead to sexual misconduct. She is currently host of Dr. Wendy Walsh radio show on KFI AM 640 Los Angeles which can be heard everywhere on the iHeartRadio app.

We asked for her insights on workplace relationships to help our readers avoid inappropriate situations, deal with troubling issues, and date ethically at work.

“Many romantic partners meet in the workplace,” Dr. Wendy noted. “We’re all human, and we constantly interact with one another at work, so it’s only natural. What you have to do then is find a way to date in the workplace and avoid a sexual lawsuit.”

What You Can Do in a Hostile Work Environment

When faced with a hostile work environment, many employees don’t know where to turn to make the issue go away. Some fear retribution for filing a report or doubt their complaints will be taken seriously. According to Elephant in the Valley, a collaborative study that exposed sexism in the tech industry, 39% of women said they had been harassed at their jobs didn’t do anything because they thought it would hurt their careers.

It’s not easy to report sexual harassment at work, but that’s the only way to truly make it stop once and for all. Making an official report to HR should be the first course of action for anyone experiencing inappropriate sexually charged comments, behaviors, or advances. For too long, sexual harassment has gone unreported and swept under the rug, leading many victims to feel as if they’re suffering alone. Sometimes it can lead to bright women, like my college friend, dropping out of the workforce, losing promotions, and disengaging from promising careers.

If you feel that the HR department or other systems in place at work won’t properly redress or handle your issue, you can always consult with an employment lawyer. Dr. Wendy pointed out that there are plenty of resources to support victims of harassment in emotional and legal matters.

In our discussion, Dr. Wendy also emphasized that sexual harassment can happen to anyone, through no fault of their own. The perpetrator is to blame, not the victim’s clothing, appearance, or relationship status. “It doesn’t matter if you’re single or married,” Dr. Wendy said. “It makes no difference to the people who practice sexual harassment serially.”

How to Date a Coworker the Right Way — With Respect & Courtesy

Navigating work relationships can be a tricky business. At what point does flirtation become inappropriate? What should you do about a work crush? Is it ethical to date an underling? Dr. Wendy shared her thoughts with us on these complicated issues.

First of all, she pointed out that employee-employer relationships are inherently imbalanced because one person depends upon the other for his or her salary. A date invitation, therefore, puts undue pressure on the employee. “You should not make a sexual suggestion to an underling,” she said. “You have to ask yourself, ‘Do they really have consent?’ And, in that situation, they don’t.”

Known for her sage advice, Dr. Wendy Walsh offers dating do’s and don’ts for the workplace.

Dr. Wendy warned men and women to be careful about the compliments they make to coworkers. You may intend your remark as flattery, but you could be making someone feel uncomfortable. Be aware of your surroundings, and keep it professional when chatting with coworkers.

If you’re attracted to someone you work alongside, your first step should be to flip open your company’s handbook and look up the dating policy. Most of the time, inter-office relationships are perfectly OK. You may need to sign some paperwork, though. Some workplaces have started instituting a so-called love contract to keep employees from suing should a workplace romance go awry.

Once you take the plunge and ask someone out, Dr. Wendy entreated singles to take no for an answer. If your coworker doesn’t want to go out with you, it’s best to drop the issue and not keep asking and asking until you end up reported to HR for harassment. Rejection is hard for some people to stomach, but it happens a lot in the dating world and is just part of the game. You won’t turn the no to a yes by being in their face all the time. You’ll only alienate them further.

If you handle the situation with poise and maturity, that’s actually a better way to curry favor and maybe show the person that you’re worth a second look. All in all, just be a friend and not a jerk.

“You have every right to ask someone out, but you don’t have the right to harass them about it,” Dr. Wendy said. “The bottom line is we need to be more honest and straightforward. We all need to be grown-ups about it and respect one another.”

Not Just a Women’s Issue: Men Can be Victims, Too

It’s important to note that sexual harassment comes in many forms and impacts many different people. The perpetrators aren’t all mustachioed CEOs, and the victims aren’t all 20-something secretaries. Sometimes, women are the ones making inappropriate suggestions to their male coworkers.

“Men can be sexually harassed, too,” Dr. Wendy reminded us. “It’s not flirty if it’s unwanted. Men and women need to be sensitive to that.”

“You have every right to ask someone out, but you don’t have the right to harass them.” — Dr. Wendy Walsh, relationship expert and psychologist

Sexual harassment at work is a pervasive problem that affects both genders. Of course, women still make up the majority of incidents, but a growing number of men are coming forward to file reports about sexual misconduct. According to the Equal Employment Opportunity Commission (EEOC), 83% of sexual harassment claims were filed by women in 2015, down from 92% of cases in 1990.

Some men aren’t victims themselves but still feel frustrated and troubled by the subculture of sexist behaviors tainting the workplace. Dr. Wendy told us that a lot of men wrote to thank her for her advocacy on the issue. “I was pleasantly surprised by the positive feedback from men,” she said. “I heard from thousands of men, the good guys out there, who were glad to be getting rid of the old way and making the workplace safer for their wives, sisters, and daughters.”

So many employees, like my friend, simply move on to another company rather than speak up and shine a light on a widespread problem. Dr. Wendy made a bold choice in coming out with her story in early 2017. Today, her example and leadership have inspired others to be open and honest and to counter misogynistic corporate culture that fosters sexual harassment.

Dr. Wendy spoke passionately about the importance of taking action against sexual predators: “People need to be brave, speak up, follow up, and report harassment when it happens.”

Anyone, no matter their age, gender, or profession, can become a victim of sexual harassment, so it’s important to rally together on the issue. Many outspoken Americans have refused to accept the current work climate and begun pushing to make it more transparent, fair, and safe. Dr. Wendy has become a leading voice in this debate and said she already sees change taking place.

“Now that this national discourse has taken place, you see more investigations and more victims coming forward and being taken seriously,” she said. “So that’s a great new trend that I hope to continue.”