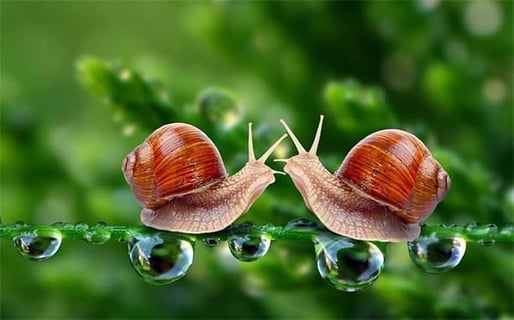 How Slow is Too Slow to Progress in a Relationship?

Things in life that are slow: snails, molasses, an iceberg, the radioactive beta decay of certain isotopes…and sometimes, relationships.

In physics, motion is defined as a change in position of an object with respect to time. Now say the object is a relationship, what happens when the motion of the relationship slows down or ceases to move?

Is there such a thing as moving too slow — sexually and emotionally — where a woman loses the interest of a man? If so, how do we know to continue to hit milestones and progress the relationship? Is there a science, or do we make choices based on our female intuition?

Moving to the next phase comes with uncertainty.

If you don’t continue to move forward, your relationship is in a state of rest. It is immobile. It is stationary. This can refer to sexual and/or emotional evolution with the potential Mr. Right.

In 1687, Sir Isaac Newton described the three laws of motion. The first law states, “Every object continues in its state or rest, or of uniform motion in a straight line, unless compelled to change that state by external forces acted upon it.”

Without it, you lose the spark — the butterflies in the pit of your stomach that make you nervous just thinking about him. If you feel the relationship is moving at the pace of escargot and that it’s in jeopardy of fizzling out, then you need to take swift action to mix things up and keep things interesting.

This obviously doesn’t need to be done sexually, though that doesn’t hurt. Plan a unique date, a romantic weekend getaway, or simply sit down to chat about where your relationship is going.

It takes work to keep things moving in the right direction and at the right speed — from both sides of the fence.

How to Be Seductive

How to Know the Difference Between Love and Lust

How to Make a Guy Initiate Sex

How to Talk to Your Boyfriend About Sex