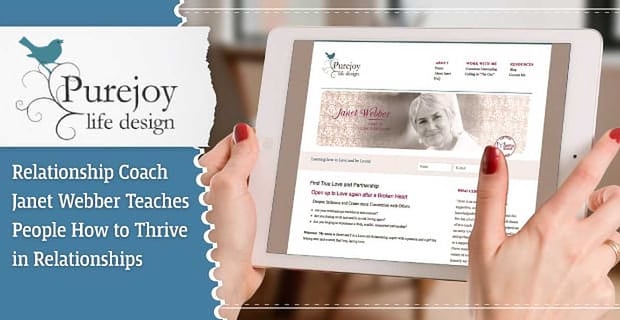 The Short Version: Janet Webber, a Canadian relationship coach, sets her clients up for relationship success by imparting valuable knowledge about human behavior, internal beliefs, and the power of self-love. Her personalized coaching courses give singles and couples the tools they need to improve themselves and cultivate happy, healthy relationships for the rest of their lives. Janet firmly believes everyone deserves to feel love and be loved, so she’s made it her life’s work to help people overcome their internal obstacles and reach a state of bliss.

When she was growing up, Janet Webber didn’t have a stable home life. Her father was an angry and violent person, and her mother quietly submitted to his demands. For a long time, that’s what Janet thought a relationship was. She didn’t know anything else, so she wound up in a string of abusive relationships.

Then, when she was 13 years old, Janet lost her father after long a battle with cancer. Coping with his death defined much of her early adolescence.

Relationship and life coach Janet Webber shows her clients how to overcome various roadblocks on the way to love.

Throughout her 20s, Janet struggled with a binge-eating disorder, which negatively impacted her self-esteem and led her to believe she wouldn’t be able to find someone willing to love her unconditionally. She felt drawn to romantic partners who were emotionally distant or plagued with addictions.

After enduring two failed marriages, Janet decided to put an end to this negative pattern. She wanted to fix herself from the inside out. “My journey was motivated by a desire to get out of my own suffering,” she said. In 2006, Janet took an instructive course about human behavior, and in 2010 she became a certified relationship coach.

“I just have a deep desire to be of service to people and find out what I don’t know so I can help others avoid my mistakes,” she said. “Relationship coaching is certainly not something I thought I’d end up doing, but this is where life led me.”

A major turning point for Janet came while studying under Katherine Woodward Thomas, a respected author and relationship expert. Katherine’s online course about love gave Janet the answers that had been so elusive to her growing up. She finally understood what she’d been doing wrong and how to correct it.

From that moment on, she devoted herself to spreading the word about these life-changing philosophies and giving people the tools they need to maintain fulfilling relationships. Today, Janet enjoys a rewarding career as a life and relationship coach, and she has gotten her own love life back on track as well. “I did get to find out what it feels like to be truly loved,” she told us. “And it’s a beautiful thing.”

Conscious Uncoupling: A Powerful Program to Reinvent Your Life

Singles come to Janet for a lot of different reasons. Some have never met anyone they’re interested in dating and have little experience with relationships. Others have had a string of short-term relationships but haven’t committed to anyone long term. And still others have recently come out of a bad marriage and are wondering how to get back out there.

“My clients want to have a relationship, but they often have no idea what to do or where to start,” she said. “You’d be surprised how many people are looking for love without a road map.”

Janet sees clients of all ages, but most are relationship-minded individuals over 30 years old.

Drawing from her personal and professional experiences, Janet passes on the transformative lessons she learned from Katherine Woodward Thomas in the Unconscious Uncoupling coaching program. The five-step process focuses on overcoming past traumas so clients can find future joys.

If you want to break out of negative dating patterns and heal your heart, Janet’s empathetic coaching can show you the way to your happily ever after.

Calling In “The One” Promotes a 7-Step Process to Love

If you’re ready to attract the love of your life, Calling In “The One” is the course for you. This seven-step coaching program teaches seven core principles to building strong relationships. Clients meet weekly by phone, in person, or via Skype with Janet and complete take-home exercises to develop their love skills.

From knowing what you want to committing to your best life, these lessons change people’s outlook on love and help them cultivate the relationships they deserve.

“It’s actually quite a magical process,” she said. “When people shift their beliefs about themselves at the deepest level, everything changes for them.”

Dozens of testimonials speak to the success of this coaching program. Marie, a client from Ontario, said Janet’s tough questions and truthful comments motivated her to grow as a person. “Talking with her helps me to see my own strength and truth, and there is no greater gift than that,” she said.

“She is a gifted coach and amazing person. I would highly recommend her!” — Kristin C., a client from California

“It was tough, but so worth it,” M.S. said about the Calling In “The One” course. “Throughout the process, Janet was an exceptional coach.”

“I can’t tell you how much I love doing this,” Janet said passionately. “I’m seeing what a difference it makes in people’s lives and seeing their lives change. A lot of my clients get in relationships and are able to take it all the way, so that’s very satisfying.”

Janet told us she never stops learning and growing as a person and as a teacher. She’s always seeking out new lessons and tools that could improve her clients’ love lives. Currently, the relationship coach has started to expand her coaching services to address eating disorders and help people maintain a healthy body image.

In the past few months, Janet has developed a set of modalities that empower her clients to become healthier in their bodies and their minds. She told us that one client lost 100 pounds while working with her.

Janet’s own personal experiences help her relate to her clients’ internal battles and offer compassionate support to clients in need of guidance. She told us she’s helped dozens of men and women lose weight and feel better about themselves — and their love lives often flourish as a result.

“If you have an eating disorder and think you can’t find love because you’re not thin, it’s a rough road,” she said. “So first we have to get a handle on that. Once the eating disorder is dealt with, it sets people up to win.”

Although Janet didn’t have a great role model for love growing up, she was able to discover the joys of healthy relationships by learning to accept herself and consciously cultivate love in her life. Years ago, the relationship coach put herself on a better path by studying from trained professionals, and now she seeks to pass on what she knows to other singles and couples wondering how to live and love better.

Through her enriching coaching programs, Janet addresses the internal issues that stop people from truly connecting with and committing to one another. With empathy and wisdom, she guides her clients through their pain and then inspires them to transform themselves and their relationships.

“My job is to help people get in a relationship where both people are thriving,” she told us. “This journey is about being in a happy and healthy relationship. No one is meant to be alone. We’re meant to thrive.”