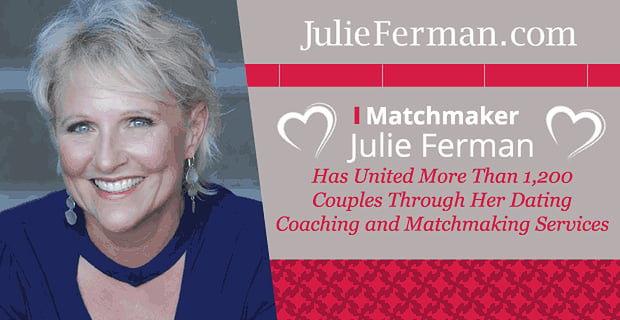 Matchmaker Julie Ferman Has United More Than 1,200 Couples Through Her Dating Coaching and Matchmaking Services

The Short Version: A series of bad dates led Julie Ferman to join a dating service, which ultimately led to meeting her now-husband, a matchmaker, and being introduced to the dating industry. She was so fascinated by the practice that she began developing her own methods for matching singles with dates that could lead to long-term relationships, and she now runs a successful business in the Los Angeles and Santa Fe areas. Julie’s collaboration with other experts in the industry and her understanding of the differences between single men and women allow her to provide a unique service.

When Julie Ferman bought a membership with a dating service back in the late ‘80s, she never expected that one day she’d be making a living as a matchmaker for thousands of men and women seeking the same kind of love she was.

While Julie did find her husband through the dating service, it wasn’t with another member on the dating site. Rather, it was with the guy who sold her a membership. To say it was a whirlwind romance is an understatement.

They hit it off right away and got engaged within five weeks of their first date. A few months later, they got married, and a few months after that, Julie got pregnant with their first child.

Julie Ferman was introduced to the dating industry through her husband, who was a matchmaker.

A month before her due date (the same day she quit her job to move on to her new role as a mom), her husband mentioned that he needed a new salesperson to help sell memberships. Julie decided to step in, and she continued working with him for the next seven years until he got out of the matchmaking business.

Julie, however, took the skills she had learned and started her own company, or as she jokingly called it “a better spouse trap.” She set out to be client-centric and help busy singles find people they would have a high chance of hitting it off with.

“I thought, ‘What a fun job this would be to talk to people all day long about dating, love, and romance and give them a more dignified alternative instead of throwing yourself out there on personal ads online,'” she said.

While Julie is a fan of dating sites, she said they often can’t provide the same results as a real human being — one like herself who uses her experience and instinct to pick and choose singles who seem to be compatible.

While numerous matchmakers charge singles to join their database and receive introductions with private clients, Julie allows singles to join for free. Once you’re in the database, you can wait for matches from Julie as they come.

“If a company is sales-oriented more than service-oriented, they don’t care [about the client],” she said.

In terms of paying clients, Julie doesn’t start making matches right off the bat. She gets to know the person first, including what he or she is looking for in a match and what his or her past dating experiences consist of.

After these initial sessions, Julie will determine whether she’s a good fit for the person and vice versa. Her matchmaking packages are invitation only and she said she “discourages more people more than I encourage.”

New clients can choose between a four-month or six-month package. Julie said the six-month program is typically best for those who have a specific preference, for example, a Jewish man who only wants to date a Jewish woman, which means she’ll do extra recruiting to find potential matches.

Julie narrows down the field of candidates by choosing her current favorites for a particular client, and then she presents the female’s detailed profile and current photos to the gentleman for consideration. Once he’s a “Yes” for meeting her, Julie then presents him to her as a suitor, and then if she’s a “Yes” for meeting also, Julie orchestrates and confirms the first date, always careful not to reveal last names. One of her secrets to her success is in the preserving of the first impression for that all important first meeting.

In addition, Julie offers concierge services for the first date, so the couple doesn’t have to worry about anything. After they get each other’s first names, photos, and phone numbers, they just have to show up to the venue.

When facilitating first introductions, Julie leaves out a key detail that’s often prominently featured on dating sites: age. She said she does this because some singles focus so much on age that they miss out on meeting some really great people.

“It enables me to make matches that wouldn’t otherwise exist,” she said.

In fact, Julie’s 1,200th couple were both looking for younger partners. “If they’d have been on Match.com, they’d have never found each other,” she said.

However, Julie’s process does differ slightly when working with women vs. men. For example, she’ll only show women the men who’ve already expressed interest in them, while men will get to see every woman who Julie believes is compatible.

Julie has been a professional matchmaker for approximately 20 years.

Julie said that she’s kept track of her clients over the years through statistics, and she’s discovered that women can develop an attraction to a man over time. Men, on the other hand, typically stick with their first visual impression.

“If a guy makes us laugh, we find him to be respectful and admirable, and we feel good in his presence, he becomes a candidate. What women tend to fight nowadays is that it doesn’t happen that way for men,” she said. “If a guy is hot for a certain woman’s look, he’s never going to go for someone else’s.”

Along those lines, Julie said one of her favorite success stories is that of Lori and John. He was smitten from the beginning, but Lori was on the fence. She always went for the George Clooneys of the world, and while John was successful, nice, and funny, she couldn’t get past her “type.”

Because they shared a love of philanthropy, cooking, and entertaining, Julie convinced Lori to go on at least three dates with John to see how things went. Well, Lori wasn’t convinced by the third date, but when John called to ask if she could help him throw a dinner party for his colleagues and friends, she was more than happy to lend a hand.

As they were chopping onions, sipping Chardonnay, and listening to music, it all of a sudden hit Lori. She called Julie from the bathroom because she just couldn’t wait to tell her that she was falling for John. They’ve now been married for 12 years.

“It’s one of my favorite marriages of all time,” she said.

Julie’s Future Includes Networking More With Matchmakers Across the Country

Currently, Julie splits her time between Los Angeles and Santa Fe, New Mexico. Most of her work is done over the phone or online, and she offers in-person coaching in either city as her schedule allows.

If someone from outside these areas reaches out to Julie, she collaborates with several fellow matchmakers to find the company in the client that would be the best fit.

Julie is always looking for new and innovative ways to help more people.

For example, if one client gets transferred to Denver for work, Julie will contact her connections there and make arrangements for one of them to continue working with him or her. She’s passionate about helping her clients find a long-term partner, so she’s willing to do what it takes. Julie also happily pays referral fees when it’s necessary.

In terms of the future, Julie would like to expand on her collaborative nature by partnering with an expert to create dating-related products, so more people can have access to the wealth of information that’s out there.

“Until that opportunity presents itself, I’m just continuing to do dating coaching and personal matchmaking,” she said. “It feels really good. I feel just as good about the coaching that I’m able to provide as I do about the introductions.”