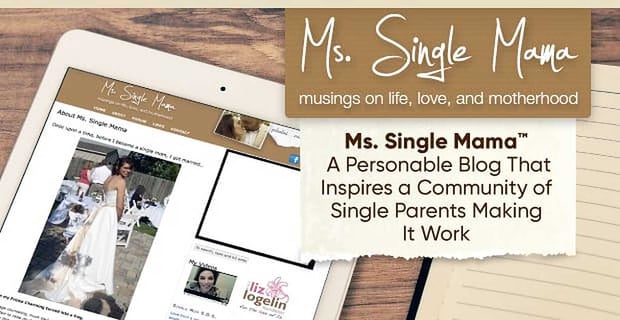 Ms. Single Mama™ — A Personable Blog That Inspires a Community of Single Parents Making It Work

The Short Version: Sometimes single parents can feel as if they were facing the world alone, when, in fact, there are so many resources available to support them. Since 2007, the Ms. Single Mama blog has provided parenting, dating, career, and general advice based on the real-life experiences of divorced women with children. Blogger Molly Undercover knows how complicated life as a single mother can be because she’s going through it too. Her uplifting and personable tone resonates with thousands of readers wondering how to balance work, family, and dating. The Ms. Single Mama blog counsels single parents on a variety of everyday challenges, ranging from online dating etiquette to recovering from adultery. Ms. Single Mama highlights the voices of women who have found the courage to start again other single mothers gain the confidence to embrace their own journeys toward love and happiness.

Molly Undercover was going through a crying-in-the-car kind of day, so she turned to her Ms. Single Mama blog to vent a little. She posted an article called “Redefining Family Vacations” to talk about her nagging worries about an upcoming family trip. She was planning a summer vacation for her son and his cousins, but she worried that this first trip without her husband wouldn’t be as fun as their past excursions.

In 2017, Molly Undercover took over the Ms. Single Mama blog in hopes of inspiring women.

She’d never planned a vacation on her own and felt paralyzed by the idea of disappointing her son. In the blog post, she thinks aloud to work through her fears and reminds herself, “It’s a good thing that I’m no longer sitting passively by and letting some man make decisions for me.”

This post lays bare Molly’s vulnerability and evoked a compassionate response from her readership. In the comments, single parents shared their own words of wisdom with Molly Undercover. “Just being with your son and having your own adventures is enough,” wrote Farrell. “Don’t put undue pressure on yourself.”

In this and hundreds of other articles, the Ms. Single Mama blog lets women know their trials and fears are universally felt by many single parents doing the best they can with what they have.

The original Ms. Single Mama, Alaina, got her start in 2007 as she navigated a new chapter in her life. Faced with the choice between an unhappy marriage and single motherhood, Alaina had the courage to leave her emotionally abusive husband and set out on her own. She left her career and friends to move in with her mother, taking her 4-month-old son out of a toxic environment.

“I opened my eyes and realized that I didn’t need a man at all,” she wrote in a post about her experience coming into her own as a single mother. “I just wanted one. There’s a big difference.”

Alaina said she chose to believe in herself and started writing the Ms. Single Mama blog to inspire others to believe in themselves, too. Her message has encouraged tens of thousands of readers facing their own personal struggles. From the pros and cons of leaving a bad marriage to tips on raising a child alone, Ms. Single Mama addresses a range of light and heavy topics that impact single mothers.

“It can feel isolating to live day to day as a single parent,” Molly told us, “so comparing notes and sharing experiences is really helpful.”

Passing the Torch: A New Voice Shares Her Journey

Molly was happily married — until she wasn’t. She said she and her college sweetheart simply grew apart in their 30s. They had a 10-year-old, but their differences became irreconcilable. Though it was painful to admit, Molly and her husband didn’t want to be married anymore, so they agreed to split up.

The day her ex-husband told Molly he wanted to move out, Molly met Alaina, who had created the Ms. Single Mama blog and authored it at the time. It seemed fated for the pair of mothers to become friends. Molly saw Alaina as a mentor, someone who knew the ropes of single motherhood and could lend support at a vulnerable time in her life.

“I’d never really dated as a mature adult ever in my life,” she said. “I’d never dated with a child or done online dating, so it really was a whole new world.”

“I don’t think that marriage is the one singular end goal of dating. Loving relationships between people can look many different ways.” — Molly Undercover

During the early phases of her divorce, Molly bonded with Alaina and read her blog to learn how to adapt to life as a single parent. She had to figure out what was best for her and for her child, and Alaina’s guidance was invaluable.

A few years later, when Alaina suggested Molly take over Ms. Single Mama and lend her experiences to the conversation, Molly jumped at the opportunity to inspire others the way Alaina had inspired her.

“Becoming a single mom has been both one of the hardest transitions I’ve ever been through,” Molly said, “but also, in a strange way, one of the most transformative and positive times of my life.”

Molly’s posts express her thoughts and feelings about single motherhood with authenticity and humor. She discusses a range of issues single mothers face and relates to her audience through her own experiences.

In “Texting While Dating: A Cautionary Tale,” Molly tells the story of a dating faux pas wherein she took a screenshot of her exchange with a love interest to send to Alaina (who’d offered to give her some friendly dating advice), but she accidentally sent it to… her love interest. Awkward. In the article, Molly dissects where she went wrong and outlines a few texting tips for singles with a crush.

“Hey, somebody’s gotta get egg on their face and show they like the other person at some point, right? Might as well be now.” — Molly Undercover

“It’s never been easier to find and communicate with the objects of our admiration,” she concluded, “and to make dumb mistakes at a rapid pace, too!”

Molly enjoys relating her experiences as a single parent and an active dater because she said she’s learning right alongside her audience. She talks about everyday issues and asks questions as a way of tackling her life one blog post at a time.

“I’m hoping that me sharing my story is doing something for them,” she said, “but it’s also meaningful for me as a writer.”

Giving Readers the Opportunity to Learn From One Another

Alaina’s steady strength and confidence as Ms. Single Mama uplifted her readers in times of crisis and confusion. Now Molly seeks to be that same knowledgeable guide for single mothers everywhere.

So far, she’s seen a lot of positive feedback. “I just read your blog about the vacations, and it made me feel better knowing I’m not alone in these feelings of inadequacy,” wrote Cassie in a comment. “I’ll be interested to see your next blog!”

The community aspect of the blog offers a peer-to-peer support system as well. Sometimes readers respond to one another and boost each other up by baring their hearts and giving advice. “I can really relate to some of what you shared,” wrote Paige in a reply to a Ms. Single Mama reader who said she felt lonely and confused. “I believe and know your dreams will adjust. Keep being honest with yourself.”

“You said a lot of encouraging points,” Domenica commented on one of Alaina’s advice videos. “I hope that I can take and remember your advice, thanks again.”

“I found validating and warm reassurance while reading your posts,” wrote Madison, a 24-year-old single mom who stumbled upon the Ms. Single Mama blog late one night. “I am happy, brave, [and] hopeful for our future, but sometimes I need assurance that I am doing OK.”

Many readers feel inspired after reading through the upbeat, honest, and empowering articles on Ms. Single Mama. The blog touches on all the joys and challenges of single motherhood to give women hope. The central message of Ms. Single Mama is simply: You can get through this.

It can be hard to nurse a child while nursing a broken heart or to put on a happy face when you’re scared to face tomorrow — but that’s what single mothers have to do. They have to find the strength within themselves to carry their families onward. But they can lighten the burden by connecting with people shouldering similar responsibilities. The Ms. Single Mama community gives women a forum to discuss their fears, triumphs, and feelings knowing they’re in a uniquely understanding environment.

The Ms. Single Mama blog engages women in a conversation about single motherhood.

Whether you’re dreading planning a family vacation solo or struggling to master online dating, you can learn and grow alongside single mothers going through similar experiences. The blog’s healing words, candid advice, and supportive community motivates single mamas to keep moving forward, comforted by the knowledge that they aren’t alone.

“I want to re-engage the readership and build a community of single moms,” Molly told us. “I would love to hear that I’ve helped women feel more positive and hopeful about their lives.”