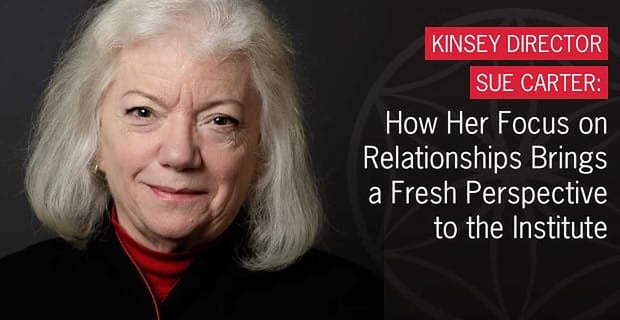 In November 2014, acclaimed biologist Sue Carter was named Director of The Kinsey Institute, known for its groundbreaking strides in human sexuality research. With her specialty being the science of love and partner bonding throughout a lifetime, Sue aims to preserve The Institute’s 69+ years of influential work while expanding its focus to include relationships.

When Dr. Alfred Charles Kinsey founded the Institute for Sex Research in 1947, it changed the landscape of how human sexuality is studied. In the “Kinsey Reports,” based on interviews of 11,000+ men and women, we were finally able to see the types of sexual behaviors people participate in, how often, with whom, and how factors like age, religion, location, and social-economic status affect those behaviors.

Sue Carter became the Director of The Kinsey Institute in November of 2014.

Being a part of this revered organization is an honor, so when Sue Carter got the call in 2013 saying she’d been nominated as Director, she was definitely honored but, quite honestly, also shocked. At the time, she was a psychiatry professor at the University of North Carolina, Chapel Hill and wasn’t looking for a new job. The thought of playing such a major role at The Institute had never crossed her mind, but she was intrigued and willing to take on a new adventure.

After an in-depth, year-long review process, which included several interviews with the search committee, Sue was chosen as Kinsey’s newest leader, and her first official day was November 1, 2014. Known as a pioneer in the study of lifelong love and mate bonding, Sue brings a unique perspective to the Institute’s mission to “advance sexual health and knowledge worldwide.”

“I think they mainly chose me because I was different. I wasn’t the typical sex researcher, but I had done a lot of sex research — my interests had become increasingly in the biology of social bonds and social behavior and all the bits and pieces that make us uniquely human,” she said.

Recently we sat down with Sue to hear more about the journey that brought her to The Institute and the ways she’s expounding on the work Kinsey started almost 70 years ago.

Sue’s Path to Kinsey: 35+ Years in the Making

Before joining Kinsey, Sue held several other prestigious positions and was responsible for numerous accomplishments. These include being Co-Director of the Brain-Body Center at the University of Illinois at Chicago and helping found the interdisciplinary Ph.D. program in neural and behavioral biology at UI, Urbana-Champaign.

Thirty-five years of impressive work like this was a major factor in Sue becoming Director at The Institute and influences the endeavors she wants to take on there.

Becoming a Trailblazer in the Study of Oxytocin

Sue’s passion for sexuality research started when she was a biologist studying reproductive behavior and attachment in animals, specifically prairie voles.

“My animals would form lifelong pair bonds. It seemed to be extremely logical that there had to be a deep underlying biology for that because otherwise these attachments would simply not exist and wouldn’t continue to be expressed throughout life,” she said.

Sue’s work includes “The Biochemistry of Love: An Oxytocin Hypothesis.”

Sue developed this theory based on work with her animal subjects as well as through her personal experiences, especially during childbirth. She remembered how the pain she felt while delivering a baby immediately went away as soon as he was born and in her arms, and wondered how this phenomenon could happen and why. This led her to discover the importance of oxytocin in human attachment, bonding, and other kinds of positive social behaviors.

“In my research over the past 35 years, I’ve found the basic neurobiological processes and systems that support healthy sexuality are necessary for encouraging love and well-being,” she said. “At the biological heart of love, is the hormone oxytocin. In turn, the systems regulated by oxytocin protect, heal, and hold the potential for people to experience greater fulfillment in life and society.”

Maintaining The Institute’s Research & Expanding On It to Cover Relationships

While Sue’s new position is an extraordinary honor only few can experience, it does come with a significant amount of responsibility, including helping to preserve and protect the findings The Kinsey Institute has made in sexuality research over the past 70 years.

“The Institute has had a tremendous impact on human history. Doors were opened by the knowledge that the Kinsey reports gave to the world,” she said. “I was walking into a slice of human history that’s very unique, that was preserved by the Institute over objections. All across these 70 years, there have been periods of time where people were concerned that maybe it would be better if the Institute didn’t exist.”

Sue strives to preserve and expound on The Kinsey Institute’s 70 years of work.

Sue also strives to make sure that progress continues, collaborating with scientists, psychologists, health professionals, and more from institutions around the world to take what they already know and use that knowledge to focus on relationships and the relational context of how sex fits into our larger lives.

In particular, Sue wants to learn what happens when people are exposed to events like sexual assault, aging, and even medical interventions such as hysterectomies.

“I want to take the Institute a bit more deeply into the interface between medicine and sexuality,” she said.

With her extensive background and unique focus on love and the overall relationships humans have with each other, Sue has big plans for The Kinsey Institute — the ultimate one being to answer the ever-elusive question of why do we feel and act the way we do?

“If the Institute can do anything, I think it can open windows into areas in human physiology and human existence that we just don’t understand very well,” she said.