With more than 40 million users from all over the world varying in age, race, religion, interests, cultures, and backgrounds, in general, Zoosk is one of the most diverse and gay-friendly dating sites around.

This global dating site has something for everyone, and it welcomes gay, lesbian, bi, questioning, queer, trans, and non-binary daters of all kinds.

Here’s what LGBTQIA+ singles need to know before joining Zoosk:

We’ve created a graphic to give you more insights into Zoosk’s user base as well as its matching system and pricing:

Zoosk gives singles a lot of freedom, and it can serve bisexual daters as well. If you identify as bisexual, Zoosk will give you a second account for free, so you can search for both gay men and lesbian women separately and more efficiently. You’ll need to contact the site for more information.

2. The Site Could Improve the Experience for the Trans Community

When looking at Zoosk’s homepage and profile dropdowns for gender and gender preference, you won’t find options for transsexual, transgender, queer, asexual, pansexual, or other gender and identity expressions. You’ll have to write that information in your profile, which could make it more difficult to find a compatible match. 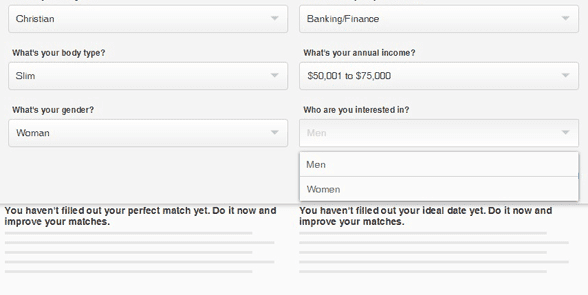 As you can see, Zoosk has options for single gay men and lesbian women, but it doesn’t have options for trans, queer, or other gender and identity expressions.

Zoosk has an inclusive environment, but its features and technology don’t always meet the needs of those who don’t fit into traditional heteronormative boxes. The site could learn from other dating sites, like OkCupid, that have expanded the gender and sexual orientation options available and, therefore, drastically improved the dating experience for millions of LGBTQIA+ singles across the globe.

Zoosk Can Be Considered Gay Friendly, But It Has Some Work to Do

Millions of gay, lesbian, and bisexual singles have had a lot of success on Zoosk, including Adam and Trathen, who met each other on Zoosk. We understand how frustrating it can be for trans and non-binary people to online date, but we also know the Zoosk team is a staunch ally in the process and has the dating pool to get LGBTQIA+ singles in the game. Keep giving the dating site your feedback on how to improve and meet your needs, and things will get better and better. Now get flirting!

“Compatible Partners” — Review of the Service (And 5 Other Gay Sites)