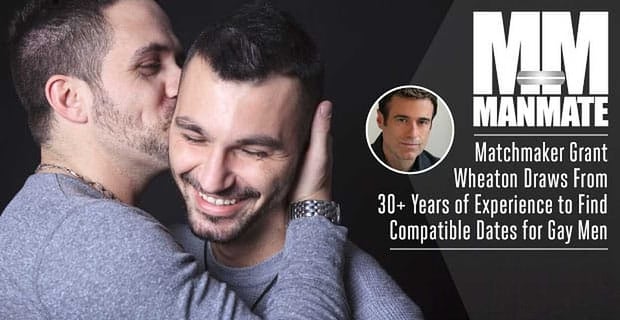 The Short Version: Since ManMate’s founding in 1985, the matchmaking firm has helped thousands of gay men on the East Coast find compatible dates and loving relationships. With deft insight, Grant Wheaton, the Founder of ManMate, arranges one-on-one introductions and large dinner parties for single men in New York, New Jersey, and Connecticut. His decades of experience as a matchmaker and dating coach inform every piece of advice and match suggestion he gives to gay professionals in the dating scene. Over the course of his one-year membership, a ManMate client enjoys consistent, personalized assistance in finding the man of his dreams. Visit www.ManMate.com or call 212-564-4025 if you want to reach Grant and his team.

In May 1985, Grant Wheaton was working as an actor in New York City when he decided to start a matchmaking business to help single gay men like himself. Living in the dark ages before the Internet, singles were limited to taking out ads in the newspaper or going to a nightclub or bar to find a date. Grant thought there had to be a better way for gay men to find a substantial relationship, so he and a friend decided to take a crack at matching men up on dates.

To jumpstart their new business, they spent a month putting together a compatibility profile and passed out over 10,000 questionnaires during NYC’s Gay Pride Week.

“It snowballed from there,” he told us, “and now I’ve been doing this for over 30 years.”

Today, Grant is the Founder and Head Matchmaker of ManMate, a professional dating service for gay men living in New York, New Jersey, and Connecticut. To get the personalized attention and advice of an experienced matchmaker, singles can sign up for a one-year ManMate membership and gain access to thousands of dating candidates in their area.

Grant sets up one-on-one introductions and social dinner parties to help gay men meet compatible singles. You can call 212-564-4025 for a free consultation to find out how matchmaking can save you the time and energy in the dating scene.

The lean team of dating experts also offers for-men-only coaching sessions by phone, on Skype, or in person. With compassion and discretion, Grant guides clients on an intimate journey to find a dreamboat to spend a lifetime with.

“It’s very personal. Dating is just another aspect of who we are,” Grant said. “Some men like one-on-ones, some men like group activities, and some men like both. I go with what my clients like to do.”

Arranging Meetings Between Career-Driven Men in the NYC Area

Grant sets a blazing pace in the matchmaking business with a membership of around 650 to 700 gay men in search of friendship, romance, and love. His ever-growing singles network has matured along with him over the years. When he started ManMate, he took on mostly younger single men in their 20s and 30s, but now he has an established membership of all ages.

Grant introduces men in casual settings by throwing Dinners for 8 every week.

He described his typical client as a career-oriented gay man looking for commitment. “We work with a lot of professionals who usually have their lives in good shape,” he said, “and they just want someone to share it with.”

When Grant takes on a new ManMate member, his first step involves an hour-long interview to put together a personal profile. He takes the time to speak with clients one-on-one, getting a sense of who they are and what they want. “My matching is based most heavily on what men articulate in their own words,” he said.

He uses the preferences of his clients as a guideline to narrow down the dating candidates and then matches men based on his own intuition. Dating websites often generate lackluster profiles of stats, but Grant uses his own instincts to give a human touch to the dating experience and make compatible matches between single gay men.

Dinners for 8: Handpicked Singles Enjoy a Night of Fine Dining

Grant’s signature service is his Dinners for 8, which give gay men the opportunity to attend intimate gatherings of singles hand-selected for compatibility with one another. When creating the guest list and seating chart, Grant makes deliberate and personalized choices to facilitate conversation and connection. According to the ManMate site, “Every man at the table is there for a reason.”

“What can I say? Sweet, intelligent, exactly my type! And he seemed just as interested in me. I’m feeling very hopeful. Wish me luck!” — Daniel L., a satisfied ManMate client

Since 2004, these unique soirees have proven a successful way to introduce single men to new friends and dating prospects in a social atmosphere. Over the years, Grant has hosted hundreds of dinner and cocktail parties at fun locales where men find good food, lots of laughter, and a hint of romance.

“It’s always new guys at the Dinners for 8,” he said. “These are people who have not met each other before, and we have feedback forms so they can request contact information of certain men after the evening is over.”

Since the early days of ManMate, Grant has handled all the matching himself. Over the years, he’s made tens of thousands of one-on-one introductions and learned to pick up on subtle personality traits beyond simply what the client tells him. His hands-on approach assesses the individual’s profile — from occupation to musical tastes — and then Grant takes a deeper look to ascertain who someone is so he can make the best match possible.

“Dating energy ebbs and flows,” he said, “so I want my clients to be able to stop and start when they want. There’s no time limit to freezing on and off.”

Grant’s Intuition Has Brought Together Hundreds of Happy Couples

One weekday night in Chelsea, ManMate clients Mark and Craig met at one of Grant’s dinner parties. This one was hosted by The Park, a sprawling restaurant known for its delicacies. In the beautiful open space, surrounded by greenery, the couple had eyes only for one another. Three years later, they held their wedding at that very same restaurant in honor of how they first met.

“We bought a house, we have a wonderful dog, and a wildly happy life. Thank you so much for helping us find each other.” –Craig P. and Mark S., former ManMate clients

ManMate’s testimonials are full of complimentary messages to Grant and his assistants. After decades in the business, he’s touched so many lives by connecting gay men in lifelong friendships and relationships.

“We fell in love and stayed passionately in love until his death from AIDS,” said Jim C., a former client introduced to his partner, Marty, by Grant over 20 years ago. “He was and is the absolute love of my life, and I would never have met him had it not been for ManMate.”

In 2008, Grant wrote a dating advice book with help from his partner of more than 16 years, Dennis Courtney. A quick read with a conversational tone, “The 7-Day Dating and Relationship Plan for Gay Men” profiles the obstacles faced by particular types of daters. From Sammy SexMachine to Arthur Apathy, he cleverly applies his experience working with many different personalities as a matchmaker to explain the mistakes he’s seen come up time and time again.

Grant co-wrote a dating advice book alongside Dennis Courtney, his partner of 16+ years.

As a dating coach and matchmaker, he’s heard plenty of feedback from his clients and has developed a full understanding on some crucial dating dynamics. In his book, he shares his perspective and insight to set gay men up for dating success in just seven steps.

Driving home valuable lessons, the book encourages reader engagement with brief activities, like a quiz or a checklist, in each chapter. Gay.com called the book, “The ultimate guidebook for gay men looking for a fresh angle on the dating scene.”

“I really felt I had to write it,” Grant told us. “It seemed a natural next step because I hear consistently what men’s challenges are and how they sabotage themselves in certain situations.”

In addition to his book and coaching services, Grant happily provides dating workshops tailored to gay singles so men can meet their full dating potential. “It’s not like therapy,” he said with a laugh. “It’s really more targeted to specific relationship issues or dating concerns a person might have. You name it, all sorts of things come up.”

If you’re gay, single, and living in the New York area, Grant Wheaton offers unparalleled support with his matchmaking and dating coaching services. ManMate has brought thousands of gay men together on dates and at events for over three decades. His attention to detail shines through in every date and dinner party he arranges.

Grant is no longer single, but he still relates to his clients and wants to assist them in any way he can. His level-headed advice, offered in coaching sessions, workshops, and his book, puts daters in the right frame of mind to make a lasting bond with someone special. As a matchmaker, as a dating expert, and as a gay man, he champions single guys seeking partnership and connection.

“There are certain things that are simply different about being a gay man,” Grant said. “I understand that because it’s my life experience, so I can relate to my clients on that level.”