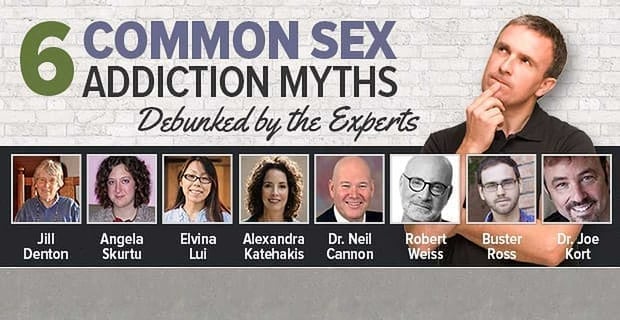 From movies like “Shame” and reality TV shows like “Bad Sex,” to the Tiger Woods cheating scandal, sex addiction has been a hot topic for decades, but do we really know what sex addiction is?

To answer this question and separate fact from fiction, we’ve gathered the top experts in the field to debunk the six most common myths about sex addiction.

Myth 1: Sex addiction is about sex and only sex

Dr. Joe Kort, a sex and relationship therapist certified by The American Board of Sexology and listed in the Recovery.org directory, said while most people chalk up sex addiction as someone who can’t control his or her sexual urges, sex is not the main motivator.

Sex addiction, according to Kort, is more about pain, trauma and loss of control, among other things, and is not something to be taken lightly.

“People make jokes about ‘Oh, I’d like to have that addiction,’ but it’s not funny,” he said.

Cannon said typically there are underlying issues and suggests the use of licensed mental health therapists to start the recovery process.

“If someone is acting out in a way that feels out of control to them sexually, it’s usually caused by something else, some combination of mental health issues like anxiety, ADHD, OCD,” he said. “The result is that many clients get shamed by spouses, family and friends for being a ‘sex addict’ when what they really needed was a supportive counseling experience founded in solid principles of psychotherapy and marriage counseling.”

Myth 2: Sex addiction is an excuse to have a lot of sex

According to Robert Weiss, founding director of The Sexual Recovery Institute, oftentimes people assume sex addiction is something that’s made up by the person who claims to be addicted.

Weiss attributes these assumptions to a lack of understanding, acceptance and insight.

“When you get to the behavioral addictions and you get away from the drugs and the alcohol, it becomes harder for people to understand,” he said.

“If you don’t have a problem saying no to things, you don’t understand why people keep doing things that obviously are a problem for them,” he continued.

Licensed Marriage and Family Therapist Elvina Lui added another common assumption is sex addicts lack moral standards and are perverts who are not capable of feeling love or remorse.

“While all addictions affect and eventually destroy a person’s personality and integrity, sex addiction is not a worse addiction, and sex addicts most certainly are capable of feeling love and remorse,” she said.

Myth 3: All cheaters are sex addicts

Alexandra Katehakis, the clinical director for The Center for Healthy Sex, said while some sex addicts may cheat on their spouses, having one or several affairs does not necessarily classify someone as a sex addict.

“A lot of times we hear from enraged spouses who are justifiably upset about what happened in their relationships, and they sometimes want to grab at this label of sex addict as a justification for why their spouse should get treatment,” she said. “I don’t condone cheating, but we always challenge a client to realize cheating doesn’t make them a sex addict.”

The criteria Katehakis uses to determine if someone is a sex addict is to pay close attention to see if the person is compulsively engaging in behaviors they’re conflicted about.

“They can clearly tell you ‘I know I’m hurting my wife. I know I’m at risk of HIV or losing my job for my behaviors. I’m know blowing my kids’ college money on prostitutes or negative consequences. I’ve sworn many times to quit, and I keep getting pulled back into doing it. I feel really guilty and shameful. I’d like to stop,'” she said.

Myth 4: Everyone has the same definition of sex addiction

Angela Skurtu, a nationally certified sex therapist and contributor to GoodTherapy.org, describes sex addiction as a “pop psychology term,” one that is not yet defined in The Diagnostic and Statistical Manual of Mental Disorders.

“The issue is up for debate as to whether it is considered an addiction or a hypersexual behavior. We are still not sure how to classify it,” she said. “In the DSM, the primary addictions listed are chemically-based addictions, such as cocaine, methamphetamine, nicotine, etc. We still have a great deal to learn about behavioral addictions.”

Skurtu said while usually there are two treatments for sex addiction, one being an abstinence-based system and the other being a harm-reduction system, there is a lot of research that still needs to be done to accurately classify, define, diagnose and treat sex addiction.

“When people are treating it, they’re either treating it as an impulse control disorder or sometimes a sexual dysfunction that is considered not otherwise specified,” she said.

“Sex addiction, also referred to as hypersexuality, was considered for the most recent revision of the diagnostic manual clinicians use when making diagnoses, the DSM 5,” he said. “After extensive review, it was not adopted as a diagnostic condition because there was insufficient evidence to support such a diagnosis as a primary condition.”

“It’s not that the struggles aren’t real,” he continued. “It’s just that professionals are not convinced that ‘sex addiction’ is its own condition, perhaps best understood as symptomatic of other underlying mental health disorders (ADHD, impulse disorders, trauma-related disorders, bipolar disorder, stimulant-use disorders).”

Ross, an AASECT certified sexuality counselor, added the most effective treatment will come from therapists who understand eroticism from a sex-positive orientation and choose to focus on treating the underlying disorders instead of using labels like sex addiction that contribute to shame and the sexual disempowerment of clients.

“Sexuality professionals within AASECT are certified to treat sexual problems from a diverse range of approaches, offering alternatives to an addiction model, something necessary for issues as complex as modern sexuality and relationships,” he said.

Myth 5: Every sex addict was sexually abused as a child

While this statement is often thrown around, Katehakis said there is no solid evidence to back it up.

Dr. Patrick Carnes, author of “Out of the Shadows”

“But having said that, a lot of people who are sexually addictive have had early sexual experiences that probably weren’t very positive,” she said.

Whether discussing early or current sexual experiences, Katehakis said people compulsively engage in a variety of behaviors they find appealing but others do not, which is examined further in a concept created by Dr. Patrick Carnes called an arousal template, where one sex addict may be into cross-dressing, one may be attracted to a certain body type and so on.

“This arousal template is a very interesting concept to consider how people’s early sexual experiences or associations they make sometimes become compulsive or addictive and that they want to reproduce a very specific type of partner, interaction or situation to create the high,” she said.

Myth 6: Only men can be addicted to sex

Denton continued to say sex addiction is more of an escape from intimacy.

The #1 truth about sex addiction

The one aspect every expert can agree on is shame is the common denominator here, and it’s up to society to make it easier for sex addicts to come forward and seek help.

“I think there’s very little compassion in our society for the struggles these people are having,” Katehakis said. “I would never invalidate their spouse’s rage or their wife’s rage at being cheated on, because that’s real and that’s their [the cheater’s] fault, but you can’t treat or help these people just by being angry at them.”

Following Katehakis’ sentiments, Lui said in order to raise awareness and accurately educate people, experts and therapists, as well as addicts in recovery, need to step forward and clearly explain what sex addiction is.

“There needs to be a clear message that is not communicated in a sensationalist or preaching way,” she said. “The message needs to be presented in a medical and scientific light, as opposed to being reported in the context of celebrity or political sex scandals. It would also help if the message equated sex addiction with the other non-chemical addictions to help the public make the connection that this is a real phenomenon that manifests in different ways.”

Whether you’re a sex addict or the partner of a sex addict, Katehakis said there are treatment options for both because oftentimes the spouses are just as traumatized by the situation.

“It’s not like an alcoholic who maybe blacks out every night and the spouse watches it year after year,” she said. “Most partners of sex addicts have no idea they’re being lied to. When they find out about this, they’re in a traumatized state, and treating them from a trauma model is the way to go.”

There also are hundreds, if not thousands, of resources to aid in the recovery process, including the books and studies written by every expert quoted in this article.

“Treatment can work. People just have to be willing to do it,” Katehakis said. “The more healthy people we have in the world, the better off we all are.”