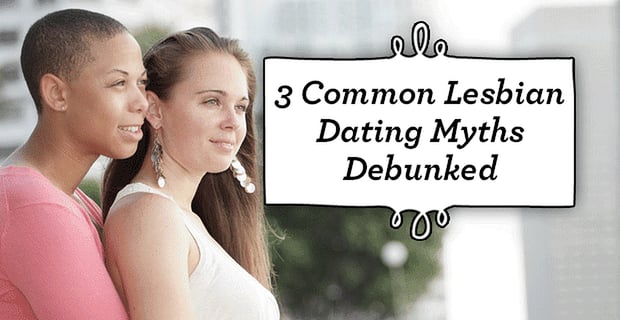 As I did research for this article, one word stood out to me: sex. It showed up everywhere. Even with recent advances in public acceptance for the LGBTQ community, the Internet is still obsessed with what goes on beneath the sheets between lesbian couples.

However, when I talk to my lesbian friends and therapy patients, I hear a different story than the one the search results tell. We rank sex as important in our relationships, but it’s certainly not the central defining element in our lives. In this way, lesbian couples are no different than straight couples. And yet popular perception takes a hypersexual view of two women together. This can be frustrating to many lesbians who just want their relationships accepted but find themselves on the wrong end of a fetish.

Bottom line: love is love. To counter the stereotypes out there, I’m going to tackle three common myths about lesbian love. If you want the truth, read on.

Lesbian love is just as likely to last as straight love.

For years, I’ve traveled across the country serving the lesbian community, and it’s truly amazing to meet so many loving lesbian couples who have stayed together over the years, overcoming social pressures, such as shunning, secrecy, or family disapproval.

After all, the divorce rate in the straight community has hovered around 50% of marriages for decades now. Even without legal marriage, I doubt our average is much worse!

Society tends to misjudge bisexuals with damaging myths about their character. I’ve been guilty of this bias, too. Because they face criticism from both gay and straight people alike, you don’t see many out and proud bisexuals or pansexuals.

In reality, more people identify as bisexual than they do gay or lesbian, so when you see a lesbian couple, one or both could actually be bisexual. While lesbians represent merely 1% to 2% of the population, recent studies tell us as many as 16% of Americans neither identify as heterosexual nor homosexual but somewhere in between (you can read more about bisexual stats and stereotypes here). In fact, a growing number of young people see sexuality in terms of a spectrum.

“I’m down with any adult — anyone over the age of 18 who is down to love me. I don’t relate to being a boy or girl, and I don’t have to have my partner relate to boy or girl.” — Miley Cyrus, singer/songwriter

And yet some people still feel disdain for bisexuals and their inability to pick a side and stay there. People who swing back and forth at will — famous examples include Lindsay Lohan, Drew Barrymore, Angelina Jolie, and Anne Heche — are criticized as “hasbians.” Their relationships are dismissed as experiments and their attraction diminished to mere curiosity.

Forget the stereotype. Bisexuals aren’t all promiscuous, confused, wishy-washy sex fiends. Just because they’re attracted to both genders, that doesn’t make them more likely to cheat and less likely to want what a lot of people want — a stable, committed relationship. You probably know a monogamous bisexual person, but you just see them as straight or gay, depending on who they’re with.

As time goes by and more bisexuals feel comfortable coming out of the closet, hopefully, we’ll put this ridiculous myth to bed once and for all.

Myth #3: There Are No True Femme/Femme Lesbian Couples

We all fall prey to gendered thinking sometimes. It’s often subconscious, and as simple as picking a blue card for your brother’s birthday, but gender roles can be deeply misleading. Gender associations are so ingrained in our culture that we get this myth: women with male traits can only be attracted to or love a woman with feminine traits (and vice versa). Someone has to be “the guy” in the relationship.

Opposites might attract some of the time, but not all the time. Some femmes love femmes.

The truth is, neither is a guy. They’re both lesbian women, no matter how spiky her hair is or how well she rocks a button-down shirt.

People see a femme or butch lesbian, and they may automatically make assumptions about what type of person she loves and what type of person will love her. But lesbian love isn’t so easily translated into straight terminology. In 2009, I went on a lesbian cruise, and I saw a diverse rainbow of relationships between people of all types.

There are plenty of femme lesbian couples out there. For example, some would say Ellen DeGeneres is femme, or at least a soft butch, and there’s no denying her wife, Portia DeRossi, is all femme. Or how about Jodie Foster and Alexandra Hedison? Or country singer Chely Wright and her wife Lauren Blitzer? Couples don’t all fit into neat gender categories, and femme relationships can last.

The Truth Will Set Us All Free

It’s important to counter the myths out there about lesbians and recognize the complexity of human relationships. Beliefs become words, and words become actions, so be careful what you accept as fact. Some misconceptions can lead to discrimination or even hate crimes, and we’ve come too far to fall prey to that.

Decades ago, the myth that lesbians are somehow psychologically inferior was thoroughly debunked. And even as recently as the ’90s, gay and lesbian parents had to fight prejudiced accusations that their kids would be psychologically harmed due to a so-called unnatural upbringing. We’ve made progress as a society, but there’s still a long way to go toward full acceptance of the LGBTQ community.

There are still some pervasive myths that linger about lesbians, keeping us from moving forward, so I hope this article cleared them up for you.

Barb Elgin, MSW, LCSW-C, Certified Singles Coach, has been coaching and counseling single, dating, and coupled lesbians for over 25 years. If you’re interested in connecting with other women who love women in healthy social and travel environments that combine fun and learning, join Barb’s complimentary email list at lastinglesbianlove.com.