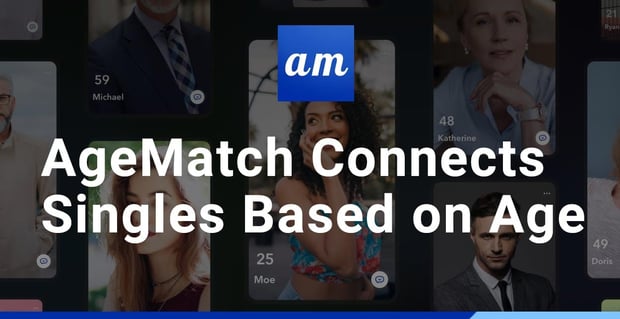 AgeMatch is Committed to Connecting Singles Across Generations

The Short Version: Age-gap dating can present singles with challenges along the way, but that shouldn’t stop them in their search for love. Thanks to the dating app AgeMatch, singles are able to comfortably meet and date people who may be significantly older or younger than they are. AgeMatch offers constructive advice, guidance, and safety tips for members who need help along their dating journey. Whether you’re an elite business man or a cougar trying to get back into the game, AgeMatch has what it takes to help you find true love.

I have always been a true believer that love comes in many forms and in unexpected ways. It’s just a matter of being ready when the opportunity to meet someone comes knocking at your door. People should comfortably be able to love who they want to love. But couples in age-gap relationships — defined as pairings with an age difference of 10 or more years — often face a lot of judgment.

The dating app AgeMatch has set the standard for age-gap dating and is on a mission to create a safe space for singles who want an age-gap relationship. Since 2001, AgeMatch has achieved a five-star reputation while maintaining its status as the world’s largest age-gap dating site.

According to the AgeMatch team, AgeMatch has served over 1 million singles from various countries, including the United States, Canada, Australia. AgeMatch is more than just a dating site that introduces people. The site serves as a fundamental educational tool for singles who want to learn how to have a healthy age-gap relationship.

Many singles trust AgeMatch because the team does a great job in ensuring members enjoy a memorable and safe journey on the site. Singles don’t have to worry about age being an issue that turns off their matches. Many members from the site have found love with someone 25 to 35 years younger or older — and that’s OK!

“We met here on AgeMatch. He winked at me and I winked back. After that he wrote me an email and I responded. We corresponded for a week, and after that, he suggested a meeting. I eagerly agreed,” shared AgeMatch member Olivia in a testimonial. “He turned out to be everything I wanted, much older than me (30-year difference, which I love), protective, generous, and kind. I felt very blessed and fortunate to have met him. Thank you AgeMatch!”

A Place to Find an Age-Gap Relationship

We’ve seen countless age-gap relationships in the media. The relationships of Demi Moore and Ashton Kutcher, and Katharine McPhee and David Foster have been broadcast for the whole world to see. Unfortunately, these relationships have received some criticism and judgment along the way.

“People always make the reference with Kat and I with the age difference, but I’ve always said there’s so many things that can bring a marriage down, and age difference is just one of them,” said David in a People article.

Singles find age-gap dating worthwhile on the AgeMatch app. Singles don’t have to worry about feeling embarrassed or ashamed of who they love and what they want for their love life.

Luckily for them, AgeMatch makes age-gap dating easy and less complicated because the app is filled with a community of like-minded individuals where age-gap dating is respected.

Whatever the reason, singles on the AgeMatch app have a support system to help them make successful and meaningful connections.

It’s best to create relationships that are based on genuine and pure intentions. Connecting with someone organically helps the relationship in the long run. AgeMatch has a ton of features to help people do just that.

Letitia, AgeMatch Marketing Manager, shared with us that there are different unique features available to help members break the ice. Paid members get access to unlimited messages, filtered preferences, and the ability to take control over their privacy.

Unique features such as Spark allow members to slide through profile cards to pick and choose who interests them on the app. This improves matching efficiency and allows singles to feel more in control over their dating lives.

Sending winks or using the Match or Not feature are cool ways to break the ice for members. Sometimes people don’t know the right words to say from the jump. These features give members the chance to have something to talk about and start up a conversation with someone who interests them.

Letitia told us that the Match or Not feature was designed to encourage users to share their daily outfits. Doing so gives users the chance to like and comment on other members’ outfits and start up a conversation that can be the start of a meaningful connection.

“I believe this is the best age gap dating app that deserves a five star!” said an anonymous user on AgeMatch in a review. “It has useful features and is very functional! I met a guy who is 10 years older than me and he’s sweet and takes care of me.”

AgeMatch Has Served Over 1 Million Users

AgeMatch takes member privacy and safety very seriously. The team does a great job of ensuring that the site is filled with genuine people rather than fake profiles or catfishers.

As a result, AgeMatch members often feel more comfortable on the app. Which is reflected in its overall popularity. AgeMatch proudly has served over 1 million users so far.

In the future, the AgeMatch team has plans for growth and expansion. Letitia told us that AgeMatch will continue to carry out the mission to do what’s best for its members. This will entail more evaluation and research on how to understand users and better serve them.

“This app finally gives us a way to access the middle-ground, the dating area between hook-up culture apps and expensive soul-mate websites. It has the ice breakers built into the design!” said Paulette, an AgeMatch user in a review. “It’s easy to get a little slice of someone’s personality from these great prompts and the required photos. Highly recommend, especially for other quirky girls like me.”