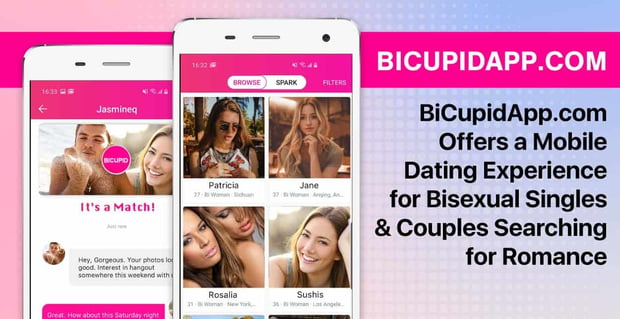 The Short Version: BiCupidApp.com is a niche dating site and app that empowers bisexual singles and couples to spice up their love lives and find partners who are attracted to them. The platform’s international network has over 1.6 million members who identify across the sexuality spectrum and want to explore their feelings for a bisexual or bi-curious date. BiCupidApp fosters a joyful and loving online dating experience, and it’s free to sign up or download the app to see what it has to offer.

Many people mistakenly think that bisexual singles have twice as many date options as straight, gay, and lesbian singles. However, the sad fact is that bisexual men and women often have fewer date options because only a fraction of people are willing to date a bisexual person.

An online survey found that only 19% of women and 30% of men would date someone who openly identified as bisexual.

Perhaps for that reason, many bisexuals choose not to out themselves, even to their loved ones. Only 28% of surveyed bisexuals said they had come out to the most important people in their lives, and about 84% of bisexuals are in a relationship with someone of the opposite sex.

Acceptance for gay and lesbian couples is on the rise, yet bisexuals are still discriminated against in the dating scene and forced to stay closeted when looking for love. Fortunately, some dating companies are making efforts to help bisexual and bi-curious singles pursue their desires and find people who value and respect their lifestyle.

As a niche dating network, BiCupidApp.com is on a mission to support bisexual dating and inspire healthy bisexual relationships. The site has over 1.6 million users in the U.S. and abroad.

Since 2003, BiCupidApp has looked out for the interests of the Bs in the LGBTQ+ community, and it has empowered singles to date anyone they choose.

BiCupidApp.com is an affiliate of the BiCupid network, which has over 2 million members and counting, and its new registrations automatically become part of this international database. BiCupidApp.com has the support of the world’s largest bisexual dating site, so it has a lot to offer singles seeking a date who identifies smack dab in the middle of the sexuality spectrum.

“Bisexual individuals are just like you and me” wrote the BiCupidApp.com team. “They are in search of people that will love and care for them. They also have different tastes in the type of partner. And they are capable of being faithful in a relationship.”

Some dating sites treat bisexuality as if it were a fetish or a phase, and other dating sites ignore it completely, forcing bisexuals to either pick a side or create two separate accounts to find a date.

BiCupidApp.com stands out as one of the few major dating platforms that cater to the needs of bisexual singles and couples. Its matching features pair up people of all sexual orientations, and it doesn’t discriminate against individuals who like to swing both ways.

As a niche dating site and app, BiCupidApp has attracted many open-minded people in the online dating space. A dating company called SuccessfulMatch launched BiCupidApp.com in 2003, making it one of the longest running dating platforms for bisexual singles and couples.

A majority of BiCupidApp.com users are between 35 and 45 years old. These people know who they are and what they want, and they’re not afraid to go after it.

Not everyone on BiCupidApp.com identifies as bisexual — a small portion of members are gay, lesbian, or straight — but they’re all on the dating site because they’re interested in dating someone who is bisexual or bi-curious. That common thread unites all BiCupidApp.com members and puts them on a level playing field when looking for a date.

“I think it is just amazing, and I love it for swinger seeking,” said a BiCupidApp member in a review. “So many wonderful couples/singles with like-minded interests.”

BiCupidApp.com takes pride in fostering a safe space where bisexual singles can be themselves and not worry about being harassed or judged by other members.

The BiCupidApp team is proactive about ridding the membership base of fake profiles, inappropriate content, and unsavory characters. The moderators reject people who say they’re looking for sugar daddies or sugar babies. They also remove underage singles and profiles with stock photos.

BiCupidApp members must match with each other before they can initiate a conversation.

Only premium members (i.e. those who’ve paid a subscription fee) can send messages on BiCupidApp.com, so that naturally deters scammers and spammers from taking advantage of people here. BiCupidApp.com members can also block and report anyone who exhibits suspicious or harmful behavior.

If you have any specific questions or concerns, you can always send an email to the customer support team via support@bicupid.com. The BiCupidApp team has a wealth of dating knowledge to share with users, and they go to great lengths to help singles have a good experience from start to finish.

“Thank you, BiCupid,” one user writes. “It was worth all the going and all the challenges as we experienced that great feeling of love.”

“I’m out for a great adventure with this amazing couple,” said a woman who describes herself as a unicorn. “Thank you, BiCupid, for making this happen.”

BiCupidApp has all the bells and whistles of a typical dating site and app, but it also supports the LGBTQ+ community with its security-conscious policies. From the phone number verification to the private photo galleries, the female-friendly site has ironclad privacy features to ensure members feel comfortable reaching out and building relationships online.

Since 2003, BiCupidApp.com has championed the right of bisexual singles to date without limits and love without boundaries. This niche dating site and app have a lot to offer singles and couples seeking romantic encounters, and its premium matching and messaging make it easy to find compatible dates without going outside one’s comfort zone.

BiCupidApp has inspired many passionate relationships between people who don’t think of bisexuality as a dealbreaker. BiCupidApp.com members are open to a world of romantic possibilities, and their success stories encompass a rainbow of love across all sexual orientations and gender identities.

“We all want the same thing,” the BiCupidApp team explained. “We want someone who will trust us, someone who will be there with us when no one is around… If he or she is like this, then you are on the right track.”