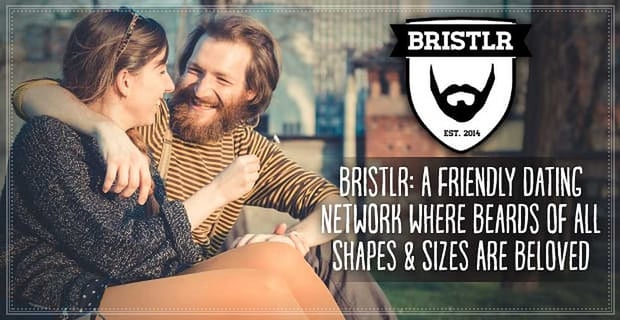 Bristlr: A Friendly Dating Network Where Beards of All Shapes & Sizes Are Beloved

The Short Version: When it comes to scruff, some can’t get enough. For beard-wearers and beard-lovers everywhere, Bristlr has cultivated a niche dating network where single people come together in mutual admiration for a whiskered chin. You register by answering the oh-so-important question: “Do you have a beard?” No need to state your gender or fill out a lengthy bio — singles can immediately start rating beards and messaging users for free. Begun in 2014 as a joke, Bristlr is a quirky network that connects men with facial hair to dates who love tickling kisses.

In 2014, John Kershaw was daydreaming at the office when a silly question popped into his head: What if there were a dating app dedicated to guys with beards (and chicks who like beards)? He checked, and it looked like he was the first to think of beard-fondling as a basis for a dating network.

John found the idea so appealing that he created a fake landing page for it, just for fun. He did it as a funny thought experiment and to procrastinate his work, but singles latched onto the idea. Lo and behold, people tried to sign up and expressed interest in joining a beard-related social network.

When he saw the online response, John realized he was onto something. Bearded people need love, too, so he went about making the fake page into a real site. Bristlr may have started as a joke, but it quickly took off among beard growers and beard lovers around the world.

“We got a lot of PR just from people going ‘look how ridiculous this is,'” explained John, the site’s Founder and Technical Lead. “Bristlr is all about beards on the surface, but it’s actually more than that — it’s a lifestyle market representing beardy culture.”

Now, Bristlr holds the coveted position of the world’s greatest beard-centric dating site. Their solemn promise: “Connecting those with beards to those who want to stroke beards.”

John described the vibe of the site as hipster-ish, attracting singles with a unique sense of style (plus beards). Many of the male users show off their sculpted beards, twirled mustaches, and long whiskers that would make even Santa Claus jealous.

The dating platform is active in hundreds of cities worldwide, mostly in the United States and other English-speaking countries, and their user base is rapidly growing. Eschewing hookup culture, Bristlr is a relationship-based dating site for people looking for true connections with quality individuals. Two members must “like” each other before sending a message, so singles are safe from unsolicited come-ons from overzealous beard-strokers or over-enthused beard-wearers.

“Because it’s more niche and a smaller community, you don’t get as many people playing the hookup game,” John said, “and we position ourselves to be more fun and relaxed.”

The site is free to use, but some premium features cost a little extra. “We charge you the cost of a cup of coffee,” John said, “and maybe a donut.” Indeed, the site actually reads, “Buy us coffee to enable” certain features. For a few bucks a month, subscribed members can see their matches and views.

“You can see who’s checking you out and have a glowing sense that you’re supporting a worthy cause,” he added.

On Bristlr, filtered searches shave hours off your browsing and bring you straight to date prospects in your area. This tool is straightforward, letting you filter the search results by age, distance from you, new members, liked members, and, of course, “beard or no beard.”

If you enjoy a little randomness (and you’re really into beards), you can click the “Rate Beards” option to play Bristlr’s version of swiping left or right.

The Beard Rating is a fun way to give your opinions on awesome goatees and sexy stubble. You can rate beards from one to five and quickly browse through the network of singles. John gave us the inside scoop and told us that on Friday people rate beards higher overall (a 7% uptick), so that’s a great time to get out there and start chatting.

Another standout feature is  called the Lothario Detector, which warns you about spammy messages. If the offending message has been sent to another user (the two-timer!), you’ll get a notification saying so. By outing copy-and-pasters, the site promotes quality communication across the site. “The feedback has been overwhelmingly positive,” John said, “with the exception of a few grumpy dudes.”

Growing Success Stories From Couples Around the World

According to the site, more than 250,000 connections have been made on this online paradise for beard lovers. Their members often write in to tell their story and thank Bristlr for bringing them together.

In Hawaii, Chad got down on one knee and proposed to Jenna, whom he met on Bristlr.

“As soon as I saw him, I knew it was right,” writes Emma, a happily matched Bristlr member. “It was as if the missing pieces had fallen into place. I knew then and know now that he is the only man for me.”

She met Reinier online and, even though he lived in the Netherlands and she lived in Australia, they knew they’d found something special. He later uprooted his life and moved to Perth to be with her.

Another testament to the site’s success is Jenna and Chad, who met when one of Jenna’s friends created her profile for her as a joke. They became engaged after five months of dating, and now live happily in their house in Chicago.

John told us Bristlr averages about one wedding per month, based on what they’re hearing from their members.

A Savvy Team Runs the Site With a Sense of Humor

The Bristlr team is hilarious, signing their emails “Love and beards” and constantly poking fun at their beard-obsessed website. They don’t take themselves too seriously, but they’re no less passionate about what they do.

“It’s not like we’re building a tool for brain surgeons,” John said with a laugh, “so we can have fun with it. Just today, someone gave me a copy of a book called ‘The Philosophy of Beards.’ So, I love this job.”

In an effort to pass along their success to other niche markets, the Bristlr team came up with M14 Industries, an app-building company for entrepreneurs. They create apps that empower people and bring niche communities together around common interests — everything from reading to tattoos. M14 Industries gives technical backing to people with cool ideas for a new social platform.

“We wanted to make it easy to make your own dating app,” John said. “We’ve got a track record of delivering really nice products, and, as far as I can tell, we’re the only people in the world offering a service like this. Just tell us what you want, and we’ll build it.”

It’s an undeniably amusing premise — a dating site for people with beards! — but what John created is much more. Bristlr fosters a lighthearted atmosphere for singles who are too awesome for the mainstream. The niche dating platform doesn’t take itself seriously, and many daters enjoy that about it.

On Bristlr, singles come for the beards, but stay for the quality dating prospects.

Since 2014, Bristlr has revolutionized the dating space by powering beard-centric dating. Their good humor, simple design, and clear appeal has grown their audience to impressive lengths — much like many of the beards on the site.

Today, hundreds of thousands of users, with and without beards, go online to find relationships in a niche community. This dating space is as distinctive as it is delightful, and it’s free to join so why not give it a shot?

Whether you’re celebrating No-Shave November or you sport your whiskers year-round, this site welcomes facial hair of all shapes and sizes.

“We’ve got these couples who met on Bristlr and keep us updated, and that’s just lovely,” John said. “It started as a sarcastic, tongue-in-cheek idea, but people have really latched onto it, and we’re very proud of that.”