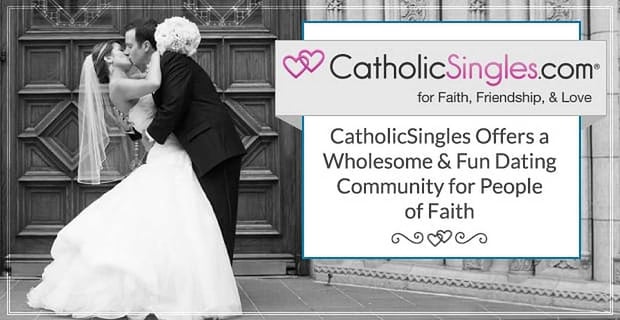 The Short Version: If you’re a practicing Catholic trying to date, finding someone who shares your values can be difficult on a general dating site. You have to hunt through a massive number of profiles to find the scant few who are compatible with you, and still there’s no guarantee you’ll even find someone who prioritizes religious views in dating. To streamline the search for a perfect match, CatholicSingles.com offers direct lines of communication to Catholic daters across the US. The niche dating site was created by a Catholic single who experienced the challenges of faith-based dating and felt inspired to build a close-knit online community of Catholics as a solution. Founded in 1997, CatholicSingles offers members a welcoming space where all singles have at least one thing in common: they’re all Catholic. You can join for free to search for dates, complete fun quizzes, and discover why the site is a trusted dating resource for so many. Over the decades, CatholicSingles has attracted thousands of Catholics who form deep bonds based on shared faith.

A few years ago, Anna joined CatholicSingles.com on a dare. She had very low expectations for the dating site but figured it was worth a shot. When Mike invited her to get a cup of coffee, she was hesitant to agree because he lived two hours from her home in New York City. However, four months of emailing was enough to convince her he was worth the risk.

Anna met Mike on CatholicSingles, and they were married two years later.

The couple met on Memorial Day weekend and spent seven blissful hours engrossed in conversation. After sharing a cup of coffee, Anna and Mike attended a Vigil Mass at Saint Patrick’s Cathedral and then went out to dinner in Chinatown. It was a hot and muggy day, but neither of them minded one bit. They couldn’t get enough of one another!

“We have been inseparable ever since,” Anna said in her testimonial. “We got engaged two years after we met. We didn’t want a long engagement.”

CatholicSingles.com exists to serve faithful Catholic daters, like Anna and Mike, who are searching for a special connection based on shared beliefs. The dating site encourages single men and women to interact and build friendships and relationships with kindred spirits.

Mark Daoust recently took over as CEO of CatholicSingles and said he feels excited to provide such a vital service to Catholic people. “Faith is important when it comes to relationships,” he said, “so having those shared values makes a difference.”

Founded 20+ Years Ago as a Catholic Dating Resource

As a young single Catholic, David Nevarez graduated from college, completing a total of 12 years of Catholic education, and found his dating pool had dried up. While in school, he was an active member of the Catholic Newman Club, a popular Catholic club, and had a strong social network based on faith — but, as an adult, he had fewer avenues to meet single women who shared his beliefs and values.

“I started realizing the internet might be a way to help myself and others,” he said. “There were no other Catholic dating websites in 1997, so at that time, a light bulb went off, and the Holy Spirit guided me into and through this project.”

In 1997, David launched CatholicSingles.com, hoping it would be a useful tool for people with similar faith, backgrounds, and beliefs. Built by a Catholic dater for Catholic daters, the site soon won people over and gained a devout following.

Over the years, CatholicSingles has established a reputation as a trustworthy dating site. Now the site has passed into Mark’s hands. He has taken up David’s founding mission to connect a community of Catholic daters on the web. “My story is just starting,” he said. “Hopefully, I can do something as good as he did with it.”

CatholicSingles provides a niche dating space with effective communication and search features. You can join the site and start mingling with other single Catholics in just three steps.

The first step is creating your profile. You simply input your birthday, occupation, location, and other basic information to create a free profile on CatholicSingles. Members can then fill out a more detailed bio and add pictures. You can also take the site’s extensive compatibility test to highlight the fundamental aspects of your personality and what you’re looking for in a partner.

“Our compatibility test combines time-tested methodology with unique questions about faith,” David said. “Religion is a very important component in long-term relationships, and our members are here to share that perspective.”

The next step is searching for compatible dates. You can conduct an advanced search by location, appearance, and interests. CatholicSingles encourages members to keep an open mind when browsing through profiles. According to the site, “Those searching with the least restrictions sometimes find someone special where they least suspected.”

Signing up to CatholicSingles takes only a few seconds, and you can upgrade to a full membership whenever you’re feeling chatty!

Finally, you can upgrade to a membership plan at any time to start communicating with people on CatholicSingles.com. You can sign up for a one-month, three-month, or six-month membership for a low monthly fee. Paid members enjoy unlimited messaging and more advanced search tools on the site. You can send a message, a smile, or live chat, or you can enter a chat room on the site to mingle with eligible Catholics.

CatholicSingles.com fosters a fun environment for singles with engaging features to keep people active on the site. User-generated content, such as Prayer Intentions, give users a platform to send out good thoughts, ask for prayers, and connect with the larger online community.

To become more involved, you can subscribe to the site’s newsletter or check out local events hosted by CatholicSingles members and partners. As the website’s Founder told us, “What draws our members in is the sense of community and support that only a truly Catholic site can offer.”

Hundreds of Couples Go From Shared Values to Sharing Their Lives

CatholicSingles highlights the love stories of dozens of engaged and married couples who met on the site. Its heartwarming testimonials speak to the niche dating community’s success at matching people on a deep level.

David told us a story about one older couple who met on the site and now celebrates their marriage anniversary every month. “They were advanced in years,” he said, “and didn’t want to take for granted the time they had left with each other!”

“I joined the website because I realized the traditional way of meeting people wasn’t working for me.” — Natalie, who met her husband on CatholicSingles.com

Some of these stories are truly miraculous testaments to the power of love. Matt had actually signed on to CatholicSingles to close his account when he saw a message that intrigued him. It was from his future wife, Kristin. Now they’re happily married with three kids. “We would never have met if it weren’t for your site,” the couple wrote in their testimonial.

Carrie and Shawn also say they probably never would have crossed paths if not for joining CatholicSingles, and they would’ve missed out on something truly special. According to the married couple, “When we met in Denver for dinner, we both agreed that it was one of the most fun dates either of us had ever been on, and our relationship just kept getting better.”

The testimonials page gives singles hope that love is out there and CatholicSingles.com can work. “It takes time to find the right person,” Mark noted. “Sometimes it’s frustrating when it doesn’t happen right away, so I want people on the site to know they’re not alone.”

You never know when (or where) love might find you. “I was ready to close my account when Anna’s picture popped up as a suggested match,” Mike wrote in his CatholicSingles testimonial. “I was the total opposite of her profile, but I thought I’d go for it anyway.”

Without CatholicSingles.com, Mike never would have met the woman he would become his wife. The site excels at connecting individuals who share similar core beliefs. Any Catholic dater frustrated by the general dating scene can log in to gain immediate access to a community of people united by their shared faith.

Since 1997, CatholicSingles has served as a place where Catholics can find faith, friendship, romance, and love online. You can sign up for free to find out what the site’s all about and then subscribe to a monthly membership plan to benefit from the site’s effective communication and search features. The website makes it easy to meet someone special and feel confident from the outset that you’ll have at least one thing in common.

“My future plans revolve around bettering the user experience and developing a more community feel on CatholicSingles,” Mark told us. “I want to build on the sense that our members are like-minded people with the same wants and desires.”