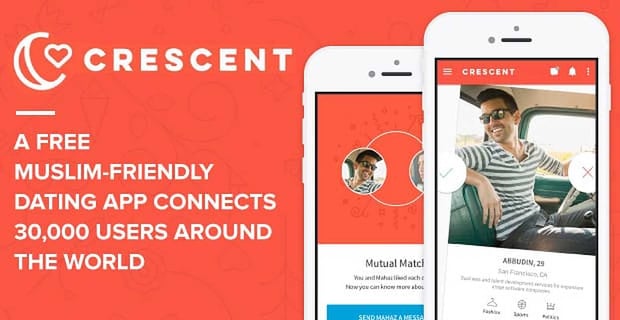 The Short Version: It can be hard when you feel like you’re in the minority on a general dating site. No matter how much effort you make to attract people to you, certain differences can drive you apart. That’s why niche dating platforms have become so popular for individuals seeking true compatibility in their love lives. If you’re a Muslim single and want to meet other Muslim singles, you can download Crescent for free and connect with over 30,000 members. You don’t have to be Muslim to create a profile, swipe through date prospects, and start a conversation on the niche dating app. Crescent’s inclusive community welcomes Muslim singles as well as anyone open to dating someone who follows the Koran’s teachings. Free Crescent memberships never expire and include live chat features, so you don’t have to pay to find romance on the app.//

I try to be open-minded when I’m on a dating site or app. I’ll talk to pretty much anyone who seems relatively nice and able to write in complete sentences. It just seems like the decent thing to do, and sometimes guys surprise me by being secretly funnier or smarter than their dating profiles or initial messages let on.

One night I’d spent a good hour exchanging quips with a Muslim guy when he stopped joking around for a minute and admitted how rare it was for him to meet someone willing to talk to him. He attributed his bad luck to his unusual Arabic-sounding name. “Girls think I want them to wear hijabs and convert,” he said with obvious frustration, “but I just want to talk!”

Some singles may hesitate before responding to someone who comes from another culture and subscribes to a different religion than they do because they’re worried that having differing beliefs will be a relationship sticking point — especially for more disciplined and faith-oriented individuals. Muslims, in particular, often have a rough time in the online dating world due to common misconceptions about what it’s like to date a Muslim person.

Fortunately, Crescent, a free Muslim dating app, has made it much easier to connect with people who want to start a relationship with a Muslim person.

Romance is just a click away for active members of Crescent, a popular Muslim dating app.

Available on iTunes and Google Play, the app fosters a growing membership of Muslim singles as well as people willing to date outside their faith. The inclusive network serves 30,000+ Muslims in the US, Canada, the UK, France, and other countries worldwide.

“Crescent was launched to help people connect,” the Founder and CEO Hamid Saify said, “and to help them meet people they wouldn’t have had the chance to meet otherwise.”

Before Crescent came along, few Muslim-only dating apps or sites existed, and fewer still provided a large enough membership to be worth a paid subscription. The Crescent team decided to better serve the Muslim dating community by creating a totally free dating app where anyone could sign up and meet their match on a mobile device. So far, the dating app has been well-received by Muslims seeking genuine relationships.

Whether you’re Iranian, Turkish, Afghan, Lebanese, Arabic, or none of the above, Crescent can introduce you to a world of dating possibilities. You can use the app’s free communication tools to meet many friendly singles who don’t want their beliefs to stand in the way of their romances.

Find a Mutual Match by Swiping Through Date Prospects

Crescent provides a cost-free mobile dating platform for Muslims and anyone interested in dating Muslims. Downloading the app and starting your free membership takes less than a minute.

You can create a profile by inputting your email address or connecting to your Facebook account. If you choose to log in with Facebook, Crescent will automatically pull profile photo suggestions from your gallery, so all you have to do is click your favorite flattering photo to upload it to your profile.

You only need one picture to become an active member on the dating app. You’ll also have to write a short bio about yourself and select a few of your interests (e.g. sports, fashion, politics) to give users a sense of who you are.

You’ll receive a notification on Crescent when someone you’ve liked has liked you back.

Once you’ve set up your profile, you’re ready to start swiping yes or no on date prospects online. Crescent will show you a profile, and you’ll swipe left if you’re interested in getting to know that person better. Two users must both swipe left on each other for a conversation window to open. This is called making a mutual match. Because only mutual matches can converse on the app, you don’t have to worry about receiving unsolicited messages from someone who isn’t your type.

Crescent attracts a fairly young user base of people in their 20s — the average member’s age is 22. These footloose and fancy-free singles are interested in flirting and seeing where things go, and they have a strong preference for Muslim dates.

While the interface may seem pretty standard for a dating app, Crescent is an innovative tool for Muslim singles because it offers an inclusive space unlike any other.

“During the launch, we were careful to allow unique features not found in most Muslim dating apps,” Hamid told us. “For example, you could identify as ‘Other’ for your gender, and we even allowed same-sex matching, whether that was for romance or friendship.”

Working out of the Bay Area, Hamid and his development team do their best to make Crescent the answer to single Muslim’s prayers. Hamid draws from his background in advertising, startups, and e-commerce to spread the word about the dating app and grow the membership internationally.

“I’ve had several successful e-commerce businesses in the past,” Hamid told us. “Crescent was a way to do something less commerce-driven and more supportive of the entire community of Muslims.”

A few years ago, he designed Crescent as a catch-all solution for the difficulties Muslim singles experienced on general dating sites. The dating app has grown steadily in popularity as more people rely on it to connect them to a community of Muslim-friendly daters. Hamid said the team is always looking for ways to improve and is currently working on developing interactive communication tools, which should launch later this year.

“Crescent will continue to become what the people want,” he said “We want to fine-tune our features and attract new users who are seeing our app as the new norm.”

Since it launched, Crescent has had a good deal of success in matching up compatible dates. Hamid told us the Muslim-oriented dating app had made nearly 10,000 matches overall. That’s a lot of conversations taking place on a single platform.

The team knows of 43 couples who have met on the site and started long-term relationships. These are just the people who have contacted the team with their testimonials, so it’s more than likely that other happy Crescent couples exist but haven’t spoken up yet. The app is new in the dating scene, so it only has a handful of customer reviews on Google Play and iTunes. But the team is proud of the loyal close-knit community it has built in a short period of time.

Hamid told us his favorite success story happened when an Egyptian man met an Iraqi woman on Crescent. They lived about 10 miles away from one another, but they hit it off on the app and were soon dating in real life. “They would have never met as their lives and family backgrounds were somewhat different,” Hamid explained, “but they connected through Crescent.”

Crescent’s ultimate goal is to give Muslim men and women the opportunity to make meaningful connections in a welcoming online community. Hamid said it feels amazing to help Muslim singles meet one another and improve their love lives. Over the years, Crescent has helped singles build their confidence and couples find romance by using reliable mutual matching tools.

I wish I could say your skin color, your gender, your religion, and your name don’t impact your dating prospects, but that isn’t quite true. When that Muslim guy told me about the obstacles he faced on dating sites, I knew he wasn’t imagining things or exaggerating. Islamophobia is an unfortunate, yet undeniable, part of Western culture, and it can negatively impact good-natured Muslims who just want to live their lives and trade jokes with someone on the web.

It can be difficult for Muslim singles to find an open-minded and friendly date who can look past differences in belief or culture and find commonalities elsewhere. However, on a niche dating site, you have that common ground on which to build a relationship. Crescent members aren’t fazed by an Arabic name or a long beard — they’re eager to date Muslim people and embrace cultural diversity.

“I’m doing it for the Muslim community.” — Hamid Saify, Founder of Crescent

If you want to date according to Halal (the Islamic law), Crescent is a great place to seek potential partners who have similar life goals and backgrounds. The app’s quick signup process, simple swiping features, and niche membership facilitate real-time flirtation and connection — and you don’t have to pay a cent to make a match.

“Crescent has been around for two and a half years, and it’s been free this entire time,” Hamid boasted. “No ads. No freemium or premium services. I’ve taken a personal loss financing Crescent, but I’m doing it for the Muslim community.”