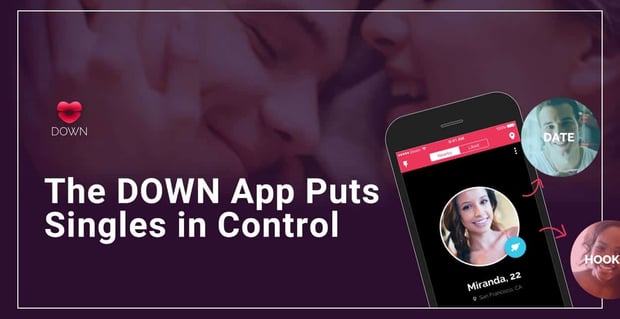 The Short Version: DOWN is a dating app that puts singles in command of their romantic destiny. The app asks users to declare themselves “down to date” or “down to hookup,” so all potential matches know where they stand from the first message onward. Casual daters thrive in this nonjudgmental space. In 2020, DOWN adapted to the fast-changing dating environment by adding a voice messaging feature that has helped single people find solidarity and build human connections despite lockdowns and stay-at-home orders.

Everyone enters the dating scene with different intentions and expectations. Some singles are casually looking for a fun time, while others are more serious about finding a compatible date and potential partner of life. Those dating intentions can change at the drop of a hat — or at the spark of a new match.

Knowing what you want is the first step toward getting what you want. A casual dater isn’t going to satisfy the needs of a relationship seeker, and vice versa. But not everyone wears their heart and their intentions on their sleeves — except on some niche dating apps.

It’s free to download DOWN and browse for a local date or hookup.

The DOWN dating app has created swiping lanes where singles can be honest about their desires from the get-go. Singles must identify themselves as either down for hookups or down for dating when sending a like to a potential match.

Since its launch in 2013, DOWN has fostered a popular local hookup scene. The membership base has surpassed 8 million users, and over half its matches have led to real-life meetups. DOWN has ranked among the top hookup apps for iOS and Android.

Thanks to DOWN’s straightforward matchmaking, singles no longer have to play guessing games just to land a hot date. Every match includes an invitation to date or hookup, so there are no mixed messages going forward.

By allowing singles to clearly express their intentions, DOWN promises to create mutually satisfying connections between consenting adults.

“Most of our users are ahead of the curve in terms of sex positivity,” the DOWN team said. “If you’re using DOWN, you likely are more open-minded, communicative, and sexually talented than the average dating app user.”

DOWN has created an online dating platform that rewards honesty and encourages real-time chatting. Its free features empower users to follow their hearts, swipe with purpose, and find attractive date prospects. As a result, the hookup app has boasted a high success rate when it comes to turning matches into meetups.

“You can take control of your dating life: You get to choose with each person whether you fancy more serious dating or casual hookups,” the team explained. “It gets rid of the awkward and exhausting routine of trying to figure out if your matches are primarily looking for the same thing as you.”

DOWN provides moral support and technical support to singles who are interested in a more targeted and engaging way to meet new people.

DOWN arranges dating matches and hookup matches in one fluid, sex-positive platform.

In March 2020, the coronavirus pandemic brought fundamental changes to the dating world. Millions of singles began staying at home rather than going out to party or flirt, so online dating began picking up steam. Dating apps became the go-to way to safely meet new people, and online traffic went through the roof.

During this time, the DOWN team started testing new audio-focused features to help singles connect without going too far outside their comfort zone.

The app recently launched Delight, which uses a voicemail system to connect online daters with online dating experts. The feature supports a fun and insightful dialogue about the ups and downs of looking for a date in the 21st century.

“It’s with hosts that we recruited to provide virtual friendship, advice, flirtation, and entertainment — like you’re voice messaging with your girlfriend,” the team explained. “It’s called Delight, and we keep evolving it to find new ways to provide a useful, fun experience for users.”

This aptly named feature has put a positive light on modern dating exploits and given DOWN users practical advice on how to up their flirting game and get where they want to be.

A Sex-Positive Space With Over 8 Million Users Worldwide

The DOWN dating app has earned overall positive reviews from users. The app has 4.1 stars on Google Play, and 4.4 stars on the App Store. Many users say they have gotten fast results in the DOWN network and were satisfied by the quality of matches they encountered.

“All I can say about this app is that it’s dating simplified to the maximum,” said a user named D.L. “No wasting time on random dudes trying to score when you want to go out and have a nice dinner first and see what happens next.”

DOWN is famously a hookup app, but its date matching feature can also help spark real relationships. In 2019, a woman named Sacorya went on her first date through DOWN, and she ended up dating that person for over a year.

“The interactions felt much more organic than on other dating apps, and it was much easier to start a meaningful conversation and find common ground with matches,” she explained. “I never expected it to work out the way it did, but I’m extremely grateful for this app. It led me to the person of my dreams.”

DOWN offers an anonymous dating scene for flirting and hooking up.

DOWN acts as a wingman for all types of singles. The app facilitates casual hookups, first dates, and real relationships. The user can choose which direction they want to go in and what kind of dating experience they’ll enjoy.

“DOWN is the most honest dating app — and the world’s #1 hookup app,” the DOWN team told us. “We have over 8M users worldwide, so come give it a shot!”

Over the last year, the DOWN team has focused on improving the quality and efficiency of its matchmaking system. The app’s goal is to create fast connections, and that work starts with an advanced learning algorithm and carries on through the chatting options. By building on its current features, DOWN aims to provide more local and international dating options for people from all walks of life.

“We’re improving the core dating and matching features,” the team said. “And adding some fun innovations to redefine dating in the modern world.”

DOWN: No Shame in This Fun Dating Game

Online daters can save themselves a lot of time and uncertainty by joining the DOWN dating network. Every profile on this app has clearly stated intentions, so casual daters don’t have to worry if their new chat buddy is DTF.

DOWN provides an answer to the question, “What are you looking for?” so online daters can move onto more interesting questions such as, “What are you wearing?” and “When can we meet up in person?”

Throughout its history, DOWN has promoted and encouraged sexually active dating. That work didn’t slow down during the coronavirus pandemic. If anything, DOWN has only picked up speed and added more virtual dating and matching features to help millions of singles find what they desire most.

“DOWN is helping make the world a more open-minded, sex-positive place,” the DOWN team told us. “Now singles can express themselves more freely and find what they really want.”