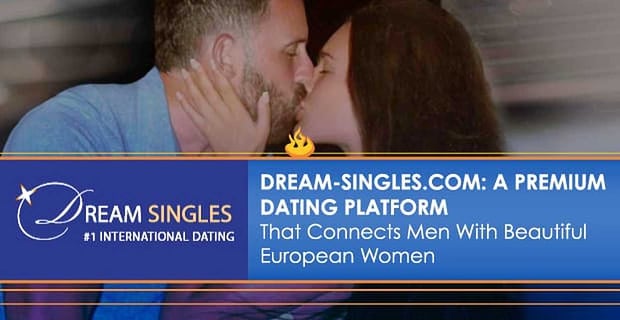 The Short Version: When a man is looking for a European woman online, he often has concerns about safety and ensuring that he’s legitimately communicating with the person whose picture he sees. Dream-Singles.com was founded in 2003 to help men more easily connect with beautiful European women — and the company verifies every woman who signs up. The premium dating site boasts an unusual ratio of seven women to every man, and the international team behind the site loves going above and beyond to make connections happen. Dream Singles offers many tools to communicate with potential matches, such as video chat, video messages, and voice chat. The platform also provides a “Serious Dater” badge to women serious about finding love — which can increase their success on the site.

Men who want to date beautiful European women often face a few challenges — language barriers, travel, and concerns about fraud or scams being the most prominent. Dream Singles, a premium dating platform, was launched in 2003 to help men around the world safely and securely meet European women — primarily in Russia and Ukraine.

The site has male members from all over the world, with the majority in the United States, Canada, the UK, and Australia. The average man on the site is 36 years old, while the average woman is 27. Unlike most dating sites, on which men outnumber women, Dream Singles boasts an impressive ratio of seven women to every man. The site also employs numerous security features to help its male members feel more comfortable using the site.

Dream Singles gives men from around the world the chance to meet amazing European women.

The business goes above and beyond to help people find love, regardless of their location. A representative from DreamWorld Partners, Dream Singles’ parent company, recalls a story from the website’s early days that exemplifies that commitment.

“There was a member who wanted to go to Russia to visit his online girlfriend and make it official,” the representative said. “He was understandably nervous to make the trip, but desperately wanted to profess his love in person. Our owner actually accompanied him on the trip and served as a translator to ease his anxiety. Going the extra mile to keep our members happy has always been a part of who we are — and we wouldn’t have it any other way.”

Dream Singles has offices all over the world, and its diverse team is a mix of cultures and races, bringing together plenty of unique perspectives.

“We have people from several Slavic countries, Asia, Europe, and, of course, America,” said the representative. “It can lead to some spirited debates on everything from child rearing to landing page creation, and the potlucks get interesting as well. It all makes for a fun, welcoming work environment.”

The site is filled with stories of successful connections that Dream Singles made possible.

Despite the cultural differences, the eclectic Dream Singles team is united in its mission of helping people connect and find loving relationships. The behind-the-scenes work and dedication are evident in the praise the team receives from clients.

In the website’s Success Stories section, visitors can view the Dream Singles team’s proudest accomplishments: satisfied customers. The section contains numerous photos and stories of real couples who not only met through Dream Singles but also found their happily ever after.

Online dating can be nerve-wracking for anyone, but when you’re dating internationally, concerns include encountering scams or frauds. Dream Singles works hard to ensure that women on the site are real daters who are legitimately looking for love. The site has a robust Anti-Scam Protection Policy to help both men and women.

Dream Singles verifies its female users to boost security and give male users peace of mind.

Every woman is verified by a photo ID before she can communicate with male members on the site. Another safety feature is a Confirmed Profile for the site’s European women. If you see a “Confirmed Profile” icon on, it means a local, independent representative of Dream Singles has personally spoken with her and verified her passport and background. These local representatives work hard to ensure bogus profiles don’t make it on the site.

Dream Singles is dedicated to fighting spam, as well. This team periodically calls female members to re-verify their identity, typically contacting them more than once to ensure they are who they claim to be. The site’s female members use the video chat feature so male daters can see that they are corresponding with the right person.

The company has many other rules and policies in place to protect male daters; for example, female daters are not allowed to ask the men for money or gifts.

The sign-up process for Dream Singles is easy. Users can go from creating an account to perusing members in less than a minute. Once your account is up and running, you can start communicating with potential love interests in several different ways.

Corresponding by chat doesn’t always give you a good sense of someone’s personality, and it’s hard to meet up in person if your potential match is across the globe. That’s why Dream Singles offers technology, like video communication, to make online dating more intimate and personal.

There’s also a feature that allows users to see which members are currently online, and Dream Singles plans to add even more features and functionality in the next year.

“Some of the more popular features on the site are video chat, video letters, and, of course, flirts,” the representative said. “Couples matching is done using a proprietary backend system, which has lead to countless connections, relationship, marriages, and more.”

Beyond online dating tools and features, Dream Singles offers occasional Singles Tours, where men can come to Ukraine and meet many single women at a fun event.

When you’re using an online dating site, especially an international one, you may worry about wasting time with people who aren’t serious about finding a relationship — or others may have the same worries about you.

Dream Singles has a feature that helps alleviate these common concerns and results in even more dating success.

“We introduced a Serious Dater feature that allows members to put a badge on their profile to let potential partners know they are committed to finding companionship,” said the representative. “Serious Dater members have reported up to a 200% increase in flirts and emails in the days following their account upgrade.”

Women love being on the site because they can connect to a world of worthwhile and caring partners, and men who are looking for European women continue to flock to Dream Singles because of its commitment to quality, security, and its users’ desire for love.