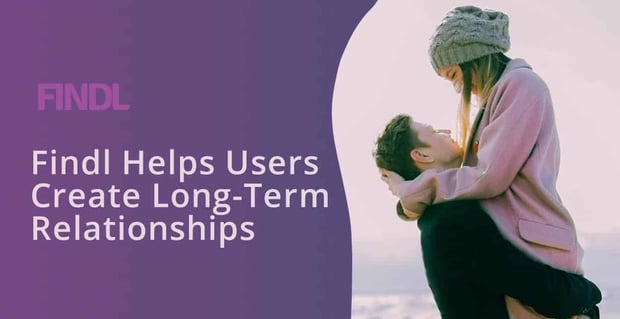 The Short Version: The popular dating app Findl fills the gap that exists between expensive dating sites and free platforms filled with fake profiles. Findl, which is free for the first six months, prioritizes the safety of users and caters to cultural norms that could become barriers to meaningful relationships. The team uses a precheck system to weed out scammers, so users can feel confident their new matches are authentic and compatible with their lifestyles.

Epko Staring understands just how challenging — and rewarding — online dating can be.

The father, musician, and programmer spent a while checking out the thousands of dating apps and sites available, and he wasn’t impressed.

“I also had an interest in relationships, why some work and some never work, and why people often repeat their mistakes,” he said. “Why do they often end up with the same type of person as their previous relationships? That made me think, from my perspective, that maybe there was more that dating sites could do for them.”

Findl offers users a safer, more satisfying experience than that of many other dating apps.

That’s why Epko created the Findl dating app that offers singles in Holland, and around the world, a refreshing experience.

Epko said he noticed that existing dating sites fell into two distinct categories. First, there were the expensive sites that made everyone’s expectations unbearably high. Then, there were the free dating sites that allow anyone to sign up. A significant problem with those free sites is that spammers or scammers can set up an untold number of fake profiles.

Many other popular dating sites were designed for very niche interests. However, Epko was convinced that it would be possible to create a single platform for everyone: people who were straight, gay, bisexual, Christian, or looking for someone specific could all find their match.

So he leveraged his 25 years of web design experience to create Findl, an app that would simplify the process of finding an interesting friend or a romantic partner. He launched the app in 2020.

“It should be possible to build a decent quality dating website for everyone, but not one that just throws people into a big box” he said. “I realized that you don’t have to build many separate websites; it can all be done on one. As long as you give all the interest groups their own experience and don’t mix them. For example: if you say are looking for a Christian, you will only see Christian profiles.”

Findl caters to those who want to spend more time connecting with potential partners than searching for them.

When Epko began his research in earnest, he compiled a list of complaints and annoyances about the existing dating apps on the market. For example, women who would write on their profiles, in all caps, that they weren’t looking for a man and for men to stop texting them. Wouldn’t it be better if these women could just block comments from men altogether? So on Findl, by default only people who are within your search criteria can message you.

He also noticed that most dating apps push endless upsells. That made singles either spend money they hadn’t planned to or waste their time since they couldn’t access the features they needed to connect with others.

Another thing he learned through his research was the significant problem of men sending unsolicited pictures — the types of photos many women can’t unsee. So why not blur chat pictures until you click them? Features like this in Findl are there so users never have to feel uncomfortable.

Findl matches singles based on a wide variety of metrics and interests.

Epko wanted to create a site for singles no matter where they are in the world. Holland has an especially liberal dating culture, he said, which is very different from norms in some Middle Eastern countries, for example. So, Epko said he realized that the app would need to adapt to the visitor’s culture.

“I created it in my head even before the building started,” he said. “Then we began to build it, and it took almost two years from start to finish. The idea was to have a quality website where people feel safe, especially women.”

He knew the process could work because he met his girlfriend on a dating site two years ago. Epko saw that people could find meaningful relationships online if the process was designed to make it easier to connect.

Findl premium memberships are free for six months, and Epko said he plans to continue the offer as the COVID-19 pandemic has made even more singles rely on apps to meet new people.

When users sign up for the app, they must pass a precheck that includes sending a verification photo. The Findl team uses technology that alerts them when it discovers that an image is stolen from the internet.

“The team has a backup system to help them weed out scammers. We were shocked to find out how many scammers try to sign up,” he said. “In only a few months we we banned 530 positively identified scammers. In the long run, that would be a disaster for the kind of dating site we want to be. If we want to be known for one thing, it’s the quality of members, not the quantity.”

User profiles are straightforward, and the Findl team works to ensure each one is authentic.

After the precheck is complete, people can start filling out their profiles. A common problem with dating sites is that many people won’t write anything in their profile. Findl offers a solution: the more details about yourself you give, the more details you get to see about others, and the more search options become available. This works as an incentive and results in rich, varied profiles.

Once users fill out a profile, they can create specific search filters to match them with others who spark their interest.

“It should work as well as finding friendships or just to chat for people as it does for dating,” he said. “Most people have a very detailed profile page. That makes it more fair, and gives a better overall experience .”

Findl’s Discover page contains links to popular, new, or active profiles, and it allows users to search beyond their filters.

The platform’s Search page offers more options to do very specific searches, and shows only the people who match the filters you set. You can search by country, age, gender, language and many other criteria.

“Our matching engine takes about 12 different factors to make up the ranking, and makes several recommendations: best overall match, best question match, best attraction and more. The cool part is the search engine itself, if you want, can be super-specific. You could be looking for a small woman with black hair, green eyes, from India, who speaks Spanish, and loves to play chess” he said. “You can narrow it down to what you think is good for you. You can even use it to find a new friend who has the same weird hobby as you.”

Findl has been designed to help connect genuine people looking for friendships or love. Part of that commitment is eliminating fake profiles from the platform. Another is adding privacy and security features.

Visitors can opt-out of all cookies and trackers on the website, which they can’t do on many other platforms. Findl’s business model doesn’t include selling analytics to big tech companies because it prefers to offer its users privacy.

Users can also keep their entire profile and photos visible to signed in members only. Making your profile visible to the outside world is an opt-in feature. “We are aware that dating is a privacy-sensitive issue for many people, so we allow them to keep their dating profile within the site, separated from the rest of the internet.”

Although the site is relatively new, Epko said the team is “bursting with ideas” to help people find meaningful, romantic relationships and new friendships even during the age of social distancing.

“Right now, growth is really important to us,” Epko said. “It was surprising because once it was translated into English, Dutch, German, and Russian, and available worldwide, we were curious to see where it would take off. The best is yet to come, we think.”