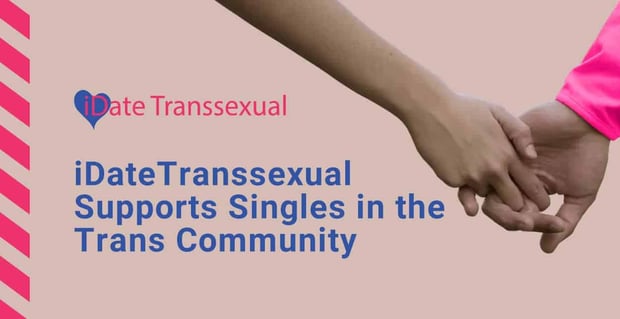 iDateTranssexual Has Safety Features to Support Singles in the Trans Community

The Short Version: The online dating world can intimidate a trans person looking for love, but niche communities have emerged to let transgender and nonbinary singles know they’re not alone. Since 2016, iDateTranssexual has maintained a free dating site where transgender women and their admirers can come together. All dating profiles on iDateTranssexual are manually checked and approved, so singles can feel safe creating new friendships and relationships in a trans-friendly dating network that circles the globe.

LGBTQ+ rights have come a long way in the 21st century. Same-sex marriage has been legalized in 29 countries, and American polling data shows homophobia and transphobia at historic lows, particularly among younger generations. Yet true equality remains elusive.

Unfortunately, transgender people can still face significant challenges, stigmas, and dangers in today’s dating world. Instead of creating genuine connections, trans singles can find themselves targeted by bullies and harassed because of their gender identity or appearance.

As a trans ally, iDateTranssexual is tackling these issues head on. This niche dating site launched in 2016 to provide a safe and positive space for single trans women. Its network currently reaches the U.S., Canada, Australia, the Philippines, Germany, and parts of Asia and Scandinavia.

The welcoming and inclusive tone of iDateTranssexual can set trans people at ease and give them a sense of belonging. No matter where they are in their transition or how they choose to identify, trans singles can be themselves on iDateTranssexual and find potential partners who love them for that.

“We created iDateTranssexual in 2016 as a venue for transwomen singles who are looking for a relationship built on mutual faith and love” the iDateTranssexual team told us. “Our goal is to support the trans community and give them a decent dating site where they can meet their life partner.”

The primary purpose of iDateTranssexual is to connect transgender women with viable date opportunities. The dating site offers an active LGBTQ forum where being transgender is an attractive quality. Single men sign up to iDateTranssexual because they are excited by the prospect of dating a trans woman. That’s a refreshing change of pace for people in the trans dating world.

All trans women can chat for free on iDateTranssexual as soon as they have completed their profile and uploaded a profile picture that has been approved.

Single men can create a profile and browse compatible matches on iDateTranssexual for free, but they will need to upgrade to a subscription plan if they want to send private messages to trans women on the site or app.

The iDateTranssexual website is user-friendly and can be accessed on any device, including tables, mobile phones, and laptops. In 2020, iDateTranssexual released its Android dating app to help trans daters stay connected no matter where they go. The iPhone app is expected to be released in 2021.

All iDateTranssexual users must come up with a username and provide an email address upon registration to activate their dating profile. The iDateTranssexual team verifies that all new profiles are legit and rewards users who complete the verification process with an iDate badge.

“Unlike most other trans dating apps, iDate is focused on finding romance or long-term love that can lead to marriage,” the iDateTranssexual team said. “To ensure you have the best dating experience, we manually check each profile. We do not keep fake profiles in our database.”

Online dating can be a safe way to meet new people and find your tribe of LGBTQ+ people. However, trans singles should take precautions to avoid toxic and harmful situations. The iDateTranssexual team has published online dating safety guidelines to make sure newcomers know how to spot the warning signs of romance scams.

For instance, online daters should be wary of a new romantic interest who doesn’t have a profile picture, asks for money or favors, or tries to move the conversation to an anonymous messenger service rather than staying on iDateTranssexual.

“Don’t say ‘yes’ if someone asks you to talk outside our provided messenger, especially if you just knew him or her recently,” the iDateTranssexual team advises. “Build your trust and see if someone is worthy of really knowing you on a deeper level.”

From Amsterdam to Sydney, iDateTranssexual has taken the world by storm and given trans people the chance to date without fearing harassment or harsh judgments.

The transgender dating site provides a safe space for personal expression and flirtation. And it has specialized matchmaking tools to help online daters spark mutual attractions in real time. The built-in compatibility mode relies on an advanced algorithm to pair couples with interests in common.

Transgender women can embrace their sexuality and follow their hearts online.

Every iDateTranssexual profile has important demographic information that serves as a blueprint for the perfect match. Users can fill in the blanks about their backgrounds, dating preferences, and lifestyles, and the algorithm searches for people with more similarities than differences.

iDateTranssexual does not require users to complete every section of their dating profile. However, doing so can help the algorithm generate more targeted matches. Complete and detailed dating profiles also tend to attract more likes and messages because online daters appreciate a person willing to make an effort and put themselves out there. Authenticity goes a long way on iDateTranssexual, so think through every photo and prompt carefully.

While many apps focus on local dating, iDateTranssexual opens singles up to a world of romance without borders. The international network has thousands of match options available on demand. A single person can search for trans dating profiles within a certain mile radius — or be adventurous and mingle with people in other cities, provinces, and countries.

Sometimes trans folks can feel excluded from dating culture and overlooked by the swiping scene. Several mainstream apps do not even list transgender as a gender option. Thankfully, iDateTranssexual has endeavored to do right by the trans community and provide more meaningful support throughout the online dating experience.

A free membership on iDateTranssexual can introduce a single person to trans dating opportunities in countries around the world. It’s a chance to go outside the everyday and meet people who come from different walks of life but share a connection to the LGBTQ+ community.

iDateTranssexual is a trans dating site that is open to all viewpoints, creeds, races, religions, and sexual orientations. It isn’t here to judge. It’s here to help.

“We believe that each individual, no matter what sexual preference or gender deserves to be loved, respected, and able to find true commitment,” the iDateTranssexual team said. “And we are offering them a helping hand.”