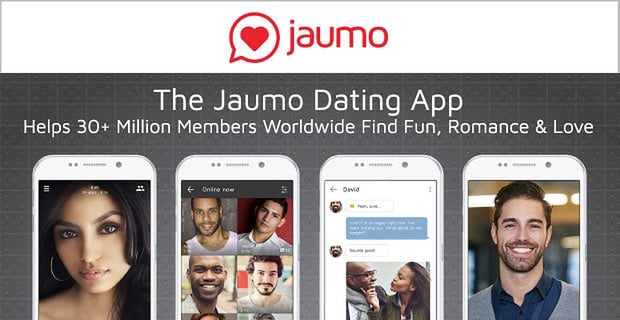 The Short Version: Jaumo is a dating app built on the idea that enabling quick, personal connections can bring singles together in memorable ways. The app was one of the first in Europe to introduce live video streaming, and its real-time chat and safety features keep users on track to finding friendship and love. Since its founding in 2011, Jaumo has grown to more than 30 million members — with 150,000 more signing up each day. Singles worldwide rely on Jaumo to help them connect as well as keep them informed about dating trends through its blog.

Online dating has grown dramatically over the years — both in popularity and the number of sites and apps. When online dating began more than 20 years ago, few saw it as something that would dramatically change the way we connect. However, that opinion has definitely changed.

Today, 59% of Americans believe online dating is a good way to meet people, and 1 in 5 relationships start online.

Jaumo helps daters connect with each other through live video streaming.

But not all dating sites and apps are created equal. Some carry a hefty membership fee, while others are free to join but include so many profiles that users can get lost in the shuffle. On the flip side, if a site or app has a limited number of members, it can be hard to connect with someone who you find attractive and who shares many of your interests.

Jaumo brings balance to the online dating world. More than 30 million people make up Jaumo’s user base, which is filled with singles who are looking for everything from friendship to love.

“For us, the fun and people are always in the foreground. Many existing apps are either too expensive or too complicated. Jaumo is neither: The basic version is free and easy to use,” said Jaumo’s Beatrix Weinrich.

The name Jaumo is Aramaic for “a new day” or “sunrise,” which is what its founders set out to offer online daters.

The Founders Have Seen Steady Growth Since 2011

Jaumo was founded in 2011 by Jens Kammerer and Benjamin Roth, who met while studying business informatics in college. Jens founded his first company, a local social network in Germany, in 1999, and Benjamin joined him at the company a year later. When that company was acquired in 2011, they turned their attention to launching Jaumo.

“Their previous company, Kwick, was one of the biggest social networks in Germany at the time, and it was also an event agency with over 230 events in one year in the south of Germany,” Beatrix said.

Jens and Benjamin ran Jaumo themselves for the first six years, and everything, from an app development perspective, was created in-house. In the last year, the company has seen rapid growth. Jaumo now employs 20 people, 75% of whom are engineers.

“The bootstrapped company is unique in the dating space and one of the last larger independent players. Also unique is that Jaumo has no offices and is a 100% remote company,” Beatrix said.

Although it started with a small team, it didn’t take long before the company took off. By 2014, Jaumo had more than 1 million users. By 2016, it had 10 times that number. Today, the app is home to more than 30 million users, with the most significant growth sectors being Brazil, Turkey, Germany, and the United States. Worldwide, 150,000 new members sign up every day.

The founders said their goal is to help singles bond with each other as often — and with as many people — as they would like.

In 2016, Jaumo was named named the Best Rated Dating App by Applause Study. One of the features that made it stand out from the rest is its live video streams that are available before and after matching. Jaumo was one of the first dating apps in Europe to offer the feature.

“With live video, we give our users a whole new environment to meet and chat. A video typically gives singles a better idea than a photograph of what another person is like, and the videos have no time limits,” Beatrix said. “As soon as a user starts a video, other users can watch them live and chat with them via a text field on the screen. All users watching the live video can see every chat within the video.”

Beyond the live video feature, users also appreciate the one-tap sign-up process, which allows them to start finding nearby users immediately. The basic membership is free, and Jaumo offers a premium version with added features and search filters. That membership level is free to try for seven days.

Jaumo users can stream live videos of themselves to connect with friends or other singles.

Jaumo is designed with safety and security in mind, which includes encrypted data, 24/7 monitoring that reacts quickly to suspicious activity, and easy ways to report abuse. If a fake member sends messages to many members, the Jaumo system can detect it instantly and shut it down the account.

“It’s important that users enjoy the app. We have a strict spam, scam, and fraud policies that set standards throughout the industry,” Beatrix said. “Apart from the behind-the-scenes security, Jaumo is an intuitive dating app. When a profile seems interesting to you, you swipe right, and if that person feels the same way about you, you have a match and can start chatting.”

As online dating has emerged as not only a viable option but also as a preferred method of connecting, discerning daters now often spend time searching for the right platform. Beyond the dating app, Jaumo’s website offers singles plenty of advice that can make dating, romance, and relationships fun and exciting.

Its blog contains informative articles, including one on how to have a successful long-distance relationship. The best way to keep your partner happy, the article reads, is to communicate.

“Communication is the be-all and end-all, even if your partner lives on the other side of the world. In times of WhatsApp, Facetime, and Skype, you can talk to your partner about everything on your heart at any time,” the article reads. “It is important that you make appointments for the calls so that you two can fully focus on the conversation and not be distracted by other things.”

In addition, the site has helpful information on how to spot fake accounts, scammers, and spammers. If your match uses strange language, says it’s impossible to meet offline, or regales you with incredible love stories, you may want to stay wary.

At the end of the day, Jaumo is a dating app built for connecting quickly — from its easy sign-up process to its live video streams that can instantly bring people from around the world together on one screen.

“Live video enables users to broadcast themselves, watch other broadcasts, invite others to join their streams, and chat with users in real time,” Beatrix said. “They can also send virtual gifts to their favorite broadcasters. We would like Jaumo to keep bringing people together and keep on growing. Our users’ satisfaction is our biggest goal.”