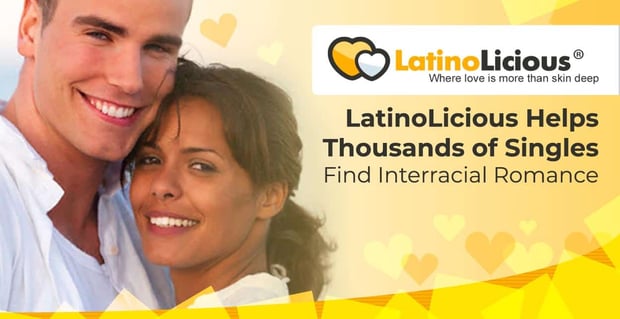 The Short Version: More singles today are interested in finding interracial love, as attitudes have changed in the last 50 years. However, many online dating sites don’t specialize in facilitating those relationships. That’s where LatinoLicious.com steps in. The platform provides an easy and fun way for Latin singles and their admirers to connect.

A little more than 50 years ago, it was illegal to marry someone outside your race in many states throughout the U.S. Times have drastically changed, though.

According to a 2017 study by the Pew Research Center, 17% of all newlyweds in the U.S. were intermarried — meaning they were of different races or ethnicities. That translates to more than 11 million intermarried couples in America, with Hispanics among the most likely to marry someone outside their race.

The study found that 27% of recently wed Hispanics married someone who was a different race or ethnicity, and almost half of newlywed Hispanics with a bachelor’s degree or higher are intermarried.

However, it isn’t always easy to meet someone interested in an interracial relationship. While nearly 40% of respondents to the Pew survey said they thought interracial dating and marriage was good for society, a lack of dedicated online dating sites can keep those people from connecting.

According to LatinoLicious.com, one of the top interracial dating sites, people are interested in dating outside their race for three main reasons. First, they like the personalities and attitudes of others with different cultural backgrounds. Second, they’re attracted to the other’s physical appearance.

Finally, people who want to date or intermarry often appreciate and embrace other cultures. That could be as simple as loving a specific type of cuisine, enjoying the sound of another language, or liking art and music different from what you experienced growing up.

“Our mission is very personal. Many of us on the Interracial Dating Team are in these relationships ourselves,” reads a post on LatinoLicious.com. “We started this site to help singles connect with people they might not meet otherwise, for friendship and — with luck — true love. By bringing together so many folks from different backgrounds, we try, in our own small way, to make the world a more loving, tolerant, and respectful place.”

The LatinoLicious signup process is simple and intuitive, and the first step is often performing a search. Visitors can browse as many profiles as they want to see if a member catches their interest. It’s free to browse, and visitors can search as often as they like.

If daters find someone they like — or want to attract others — they can create a free profile by uploading photos and adding details about themselves to help others get an idea of their interests and who they’re interested in meeting. Users can then subscribe to the site to see who’s interested in them and even chat with potential love interests.

Another attractive feature about the site is its safety. Users can learn about each other and chat anonymously without sharing personal information until they’re ready. In fact, daters are encouraged to take their time when first communicating with someone online.

Another feature that sets LatinoLicious apart from other big dating sites is that anyone can view and reply to messages. On the other sites, users may not hear back from someone they’re interested in simply because they have a free membership and can’t reply.

Plus, most dating platforms don’t specialize in interracial dating. But if a user is interested in dating a Latin man or woman — or if they are a Latino or Latina who is looking for someone outside their race or ethnicity — it makes sense to create a profile on a site that focuses on those relationships. LatinoLicious has millions of profiles from which to choose, and daters can always control what communications they receive.

“If you’ve ever been rejected because you were the wrong ‘color’ or you were always too shy to approach someone from a different race or culture, you don’t have to worry about that here,” the site states. “All of our members are open to interracial dating, and, when you approach someone on our site, you never have to worry that you are ‘the wrong race.'”

Proving That Online Dating is Effective

“Just think about how much having just one date may cost you? There is the expense of gas, a few drinks, dinner, a movie, maybe even a new outfit, and that’s just for the first date,” reads a post on the site. “How many of those sorts of dates will you have before you are ready to go to the next level? On our site, you get to know everything about someone and more importantly, how right they are for you without ever meeting face to face.”

LatinoLicious has been a part of plenty of success stories, many of which it shares on its website. Angel and Malak were living in Dallas when they both decided to try something different and sign up for the site. Angel was too busy with work for traditional dating, but wasn’t exactly confident that she’d find someone.

The team features many success stories on the site and frequently adds more.

That changed when she found Malak’s profile on the first day of her membership and started talking to him. Later, they decided to meet in person, and the attraction only became more intense.

“We met for dinner at a casual pizza/wine bistro,” Angel said in a success story on the site. “The first thought to race through my mind was’ Wow! He looks even better than his photos!”

From there, the couple was inseparable and even began making plans for the future. Those plans included getting married, which they did in January 2019.

Society has come a long way since marrying someone of a different race was illegal, but that doesn’t mean it’s easy to find someone who wants an interracial relationship. That’s why LatinoLicious came along.

LatinoLicious also offers plenty of dating tips and interracial dating news on its blog. Articles include how to lose weight for dating, which Latin celebrities are dating, and inspirational stories from members who’ve found love on the site.