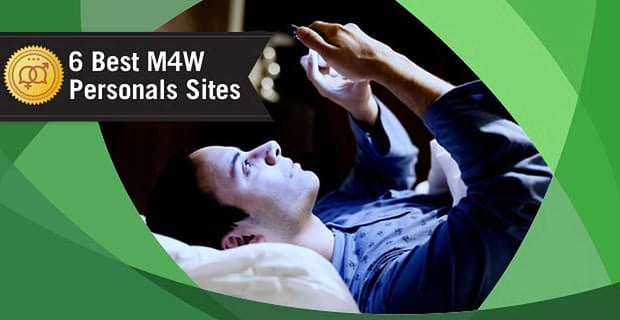 We get a lot of people coming to us asking “What does M4W mean?” and it’s a really simple answer. M4W is one of the most common acronyms in online dating, and it stands for “men for women” (aka men looking for women). This term is often used on dating sites as well as personals sites, which basically operate in the same way.

Sometimes men who are interested in women will turn to private chatting apps like Kik or Snapchat to find them, but we’ve identified alternatives that are superior for several reasons. Not only do the following six sites cater solely to men seeking women, but they’re free, popular, and successful.

With more than 30 million members, 13.5 million monthly visitors, and practically an even split between men and women — Match has got to be the number one M4W site. Plus, thanks to a unique matching algorithm, dozens of search filters, and advanced features, like Missed Connections, Match makes it super easy and fun to find your ideal hookup, date, or relationship.

On some M4W sites, you have to beat around the bush about what you’re really after. If it’s an NSA relationship, you can’t just come out and say it because you’re not sure if it’ll offend the person. However, on BeNaughty, you can be as upfront about your sexual desires as you want. Here, everyone is one the same page. The site also ensures that every member is who they say they are via profile and photo verification and SSL encryption.

“Where good girls do bad things,” FriendFinder-X touts itself as the best casual dating site and community in the world. From private photo albums to two-way webcams, you can communicate with sexy singles and couples in a variety of ways. Another perk is that FriendFinder-X doesn’t charge anything for you to register, view profiles, receive match suggestions, and get or give advice from or to fellow users.

For busy men and women, we also recommend Zoosk. It’s integrated with Facebook and Google+, so sign-up is really quick, and it’s available for both iOS and Android devices. You can get your dating on while you’re bored at home, waiting for your cappuccino, on your lunch break, running on the treadmill, going for a walk with the dog, or anywhere. Zoosk was founded in 2007, placing it among the longest-running M4W personals sites, and offers a 100% free membership that includes all the most important features.

Men for Women: Look No Further Than These Online Personals Sites!

If you’re a man looking for women with whom to hook up, date, or be in a relationship, you’ll definitely want to know what M4W is. You’ll see it on a lot of sites, profiles, and messages. While you have a plethora of places to turn to, that doesn’t mean they’re all worthy of your time and effort. Our goal is to make sure you’re as informed as possible before you make a decision, so think about the six personals sites we’ve just told you about, and then take a look at them for yourself. Have fun!

“Should I Try Online Dating?” — (7 Things to Know Before Joining)

Looking to Hook Up While Waiting for Your Flight?