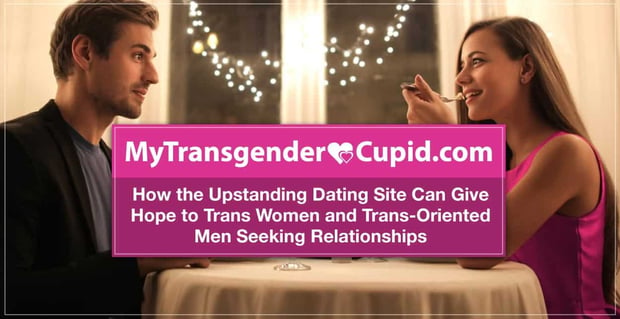 MyTransgenderCupid: How the Upstanding Dating Site Can Give Hope to Trans Women and Trans-Oriented Men Seeking Relationships

The Short Version: As a niche dating site, MyTransgenderCupid has given transgender and transsexual women access to a world of dating possibilities. The site has created a safe environment for chatting, flirting, and building relationships with trans-friendly dates. Since launching in 2015, MyTransgenderCupid has gained momentum, collected success stories, and established an online dating network with over 15,000 members from all over the world.

Stefan founded a trans dating site called MyTransgenderCupid because he saw how difficult it was for transgender women to find love, and he wanted to do something to make their lives a little easier.

MyTransgenderCupid offers a safe space for transgender women in the dating scene.

During a trip to the Philippines in 2014, Stefan encountered so many transphobic people that his heart went out to the single women living and dating in the face of such intolerance. He decided then and there to launch a dating site where trans singles would always feel welcomed.

“The idea came from a desire to start a decent and sincere dating site,” Stefan said. “It was focused on bringing a transgender woman to a man who respects her.”

Stefan’s first dating site was called MyLadyboyCupid, and it went live in 2014. The slang term “ladyboy” is commonly accepted in Asia, but it has more negative associations in the Western world, so Stefan created MyTransgenderCupid.com in 2015 to suit singles in the U.S., the U.K., and Europe.

Today, MyTransgenderCupid is one of the top transgender dating sites around the world, and it offers free registration and membership to all transgender women. Stefan said his goal is to facilitate genuine, long-term relationships — not hookups — and his independent dating site has effectively raised the bar for the trans dating scene by offering a quality-driven alternative to singles.

“MyTransgenderCupid is a dating site for people who wish to meet others with similar interests, namely looking for long-term relationships,” according to the Community Guidelines. “It is not a place where our members and users want to find out about your sexual fetishes or fantasies.”

The Active Database Includes Over 15,000 Profiles

MyTransgenderCupid gives trans women everything they need to make a deep romantic connection — without paying anything. The dating site is completely free for all transgender women. These singles enjoy free registration (with a Facebook account or email address), free matching, and free communication with no hidden fees or restrictions.

So far, over 15,000 people have created profiles on MyTransgenderCupid, and they’ve made thousands of matches in the Cupid Games section.

Single men who are interested in dating trans women can create a MyTransgenderCupid profile for free, but they’ll have to upgrade to a premium membership to send messages and upload more than five photos. The membership plans last for one month, three months, six months, or 12 months.

Additionally, MyTransgenderCupid users earn credits every time they upload a photo, edit their profiles, or log into their accounts, and they can use these credits to send virtual gifts or put themselves in the spotlight for a week.

MyTransgenderCupid has search filters and a matching game to inspire online connections.

MyTransgenderCupid takes the guessing games and awkwardness out of trans dating. There’s no need for trans women to come out of the closet or have “the talk” on dates because it says on their profiles that they’re trans. The in-depth dating profiles can also tell potential dates if you’re pre-op, no-op, or post-op, if you prefer top, bottom, or both during sex, and if you’re open to having kids one day, among other things. Users can also choose to upload a 15-second video to their profiles to bring more personality to the table.

The dating site allows trans women to show interest, add friends, favorite profiles, and communicate online via private texts for free. Men who are paid subscribers can do all the same things. This lends a level of safety to the online environment.

MyTransgenderCupid profiles include a photo gallery and an About Me section.

Another perk on MyTransgenderCupid is its 24/7 customer support. Anyone can contact the support team with a question or concern. The team is happy to assist with any issues users encounter while searching for matches, and the expert guidance the team provides is invaluable during the online dating journey.

Stefan said he has used MyTransgenderCupid in his own personal quest for love, and he has shared his insights on the blog. “Within a couple of days of joining MyTransgenderCupid, I’d met several T-girls I liked. Yet I wanted to take my time as I was looking for a long-term relationship with a transgender woman,” he said. “My message was always the same: I am real and am keen on getting together with a transgender woman.”

MyTransgenderCupid is run by a team that has a lot of empathy for trans daters. These hard-working professionals understand the unique challenges faced by modern trans women (online harassment, for example), and it’s their mission to make the online dating experience safer and more enjoyable for this vulnerable group.

Stefan sets the tone on the dating site, and he said he uses the platform to promote the welfare of the trans community as a whole. He said his intention is to make the world a better place for trans women and their admirers.

To that end, the MyTransgenderCupid team vets every new profile and moderates the dating site to ensure spammers, bullies, and other unsavory characters don’t last long here. The moderators remove nude photos, delete fake profiles, and hold members accountable for their actions online. Sexual harassment is not tolerated by this high-integrity team.

MyTransgenderCupid fosters an inclusive, respectful, and safe environment for singles of all orientations. The Community Guidelines explain the strict rules governing the trans dating site.

“We do not permit unsolicited or unwelcome sexually explicit messages on MyTransgenderCupid. Nor are sexualized or harassing comments,” the guidelines say. “Don’t misinterpret an invitation to hook up as meaning that the other person wants to see sexually explicit photographs, videos, or messages.”

Any MyTransgenderCupid member caught posting or sending sexually explicit content will be banned from the dating site.

In 2015, Stefan created MyTransgenderCupid to be a friend to trans women throughout the world, and its free dating services have met the needs and surpassed the expectations of many in the LGBTQ+ community.

Today, MyTransgenderCupid encourages singles to be themselves and pursue the relationships they deserve. Male-to-female transgender singles and their admirers can come together on this dating site and form relationships that go well beyond superficial connections.

“We didn’t want to make another pointless dating site for transgender women,” the MyTransgenderCupid team said. “Our idea was to offer a quality dating service where trans women and transgenders could find long-term and decent partners.”