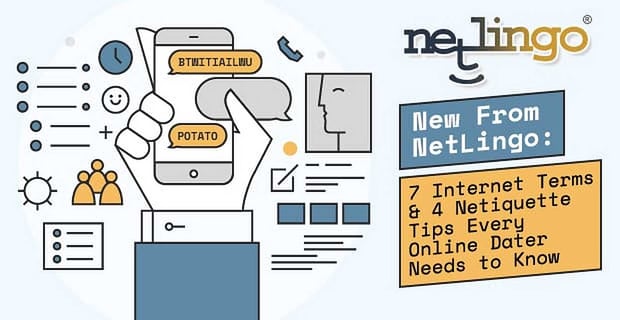 The Short Version: Chat rooms, discussion forums, and dating websites are great spaces to flirt with new people, but sometimes the abbreviated lingo trips newbies up. You practically need a decoder ring to translate sentences like, “hud, icw 2 cu tmrw” — which means “How are you doing? I can’t wait to see you tomorrow.” To help you understand what your date is saying, NetLingo offers a comprehensive dictionary of net terms, acronyms, emoticons, and other jargon. Since 1995, the website has provided clear definitions for anyone confused by the ever-changing language of the internet. This authoritative resource can give you the tools to communicate more effectively online using the latest slang. NetLingo’s Founder has highlighted for our readers particular dating terms and netiquette important to singles flirting on a dating site or app.

In high school, my text history read like an alphabet soup. It was full of cutesy shorthand. My boyfriend would say, “g2g tbu,” which means “got to go, thinking about you,” and I’d say back, “ty ttfn lol,” which means “thank you, ta ta for now, laughing out loud.” Then he’d say, “kk cya qt,” which means “OK see you, cutie.” And on and on like that 4eae (forever and ever).

When you’re talking online, a few letters can go a long way. However, it’s hard to decipher a person’s meaning when they’re using net terms you’re unfamiliar with. If you don’t want your date to think you’re a n00b, you can consult NetLingo, the largest list of online acronyms and definitions, to pick up the latest internet jargon. Each year, the site averages over 3 million pageviews and 1.5 million users browsing the site.

Since 1995, Erin Jansen has run the site on her own, taking submissions of new internet terms to define for people young and old. She’s also written and published “NetLingo: The List” to make her collection of acronyms available as a paperback or ebook.

Currently, NetLingo boasts about 15,000 subscribers to its free Word of the Day and Acronym of the Day emails. You can subscribe to NetLingo to get a daily dose of new terms and updates brought to your inbox.

In today’s modern dating landscape, you’ll undoubtedly come across acronyms and jargon on the web, so it’s best to have a go-to resource to help you understand chat acronyms, leetspeak, and other types of online jargon.

We asked for Erin’s expert opinion on the most important net terms and online dating tips for singles today, and she gave us plenty of insights into the ever-changing lingo of the net.

“You should be as real and genuine as possible,” Erin told us. “Even if you don’t know all the online jargon, you can still come across as honest and credible in your dating profile.”

Learning the definition of an unfamiliar acronym is as easy as going to NetLingo’s list of online acronyms and hitting “Control F” to find the term. Erin has also created helpful top-50 lists like acronyms for parents and popular text terms to browse for common lingo. Her dictionary is always expanding thanks to user suggestions, and you can keep up with the latest internet terms by looking up NetLingo’s newest terms here.

“You don’t want to come off looking like you’re not savvy, especially online,” she said. “I don’t know why people would even have spelling mistakes, for instance, when there’s spell check.”

When you’re talking with a date prospect online, here are seven key abbreviations to keep an eye out for:

This is a term you’ll see when things start getting serious with someone you met online. LMIRL, meaning “Let’s meet in real life,” is an invitation to see your virtual crush in person. If you’re ready to meet f2f (face to face), go ahead and type back “ofc” (of course). Just make sure you’re being smart and safe with that first meetup.

You might see variations on this net term like WLMIRL, MIRL, and IRL, but they all mean basically the same thing — moving beyond the computer screen and into real life.

Erin advises, “If you do agree, be sure to let a friend or family member know who and where you are meeting.”

ASL is a common first question in chat rooms. It’s used to get the ball rolling by inquiring into your age, sex, and location. People tend to respond with a similar shorthand — for instance, it’d be “m/56/ny” — to give their online companions an idea of who they’re talking to.

“[NetLingo] documents popular phrases and words from across the web. Many of these phrases are used by teens to hide information from parents.”  — Fox News in an article featuring NetLingo

Sometimes you’ll see an “MH” tacked on to inquire into your music preferences and hobbies. This shorthand is a great conversation starter when chatting with a group of strangers.

3. DBEYR: Don’t Believe Everything You Read

DBEYR is an abbreviation for “don’t believe everything you read” — and it’s also good advice for people on the web. In the age of fake news, you have to take online content with a grain of salt.

“People often lie about their ages or marital statuses, so don’t believe everything you read,” Erin said. “Get offline and meet, or, at the very least, get on the phone and have them verify their information is true.”

If someone tells you they’re “EWI,” they mean they are crunk (crazy drunk) and emailing while intoxicated. Some singles need a little liquid courage before messaging a potential date; others feel frisky while under the influence of alcohol — whatever the reason, you should know the person you’re talking to isn’t fully in control of themselves and may let slip some embarrassing comments.

Someone was really on their game when they came up with the term “POTATO,” which stands for “person over thirty acting twenty-one.” Burn. This is definitely not a flattering term. Typically, these underdeveloped individuals are trying to seem like carefree 20-somethings to attract a younger crowd of friends and dates.

However, a POTATO isn’t someone you should be dating. As Erin joked, “Most likely they’ll turn into a RTBS (reason to be single).”

When you’re fooling around with a friend, you are FWB or friends with benefits. This means you’re having sex with no strings attached. Erin called this “a status widely accepted in today’s modern age.” Hey, as long as you both want the same things from the relationship, it’s fine to have some casual fun with a friend.

If your date calls you his/her “fwb,” you can look it up on NetLingo to find out exactly what that means.

FWB isn’t an exclusive nor long-term setup. If you’re looking for a serious commitment, you should be going after the title bf or gf (boyfriend or girlfriend), not friends with benefits.

“Be safe. Don’t be sorry,” Erin encourages modern daters. “Any kind of digital dirt could get you in trouble.”

Online dating is treacherous territory for newcomers to the web because it operates on unspoken commandments like thou shalt not send a long, stream-of-consciousness message without punctuation.

From using poor grammar to sending spammy messages, some mistakes are instant turnoffs for online daters. If you want to avoid making a faux pas in your online communications with a potential date, you can follow Erin’s four basic guidelines to send the right message using proper netiquette.

“Even though life can feel more relaxed in cyberspace, there’s a code of conduct and unofficial rules that govern online interactions and behaviors,” Erin told us. “People communicate in a certain way online, and you have to be cognizant of that.”

Typing in uppercase implies shouting. It’s very off-putting. Unless you want to imply that you are shouting “YOU’RE HOT,” which seems a tad overeager, turn your caps lock off before messaging your date. Seriously, the only time typing in all caps is cute is when it’s your 90-year-old grandmother on Facebook. For everyone else, there’s no need to yell.

2. Don’t Overdo Your Use of Emoticons 😉

A smiley here or there is a nice touch, but sending a lot of emoticons or emojis distracts from your message. It feels like you’re trying too hard. You only need one winky face to make your point. Your texts shouldn’t read like Egyptian hieroglyphics. Just use your words!

3. Make Sure Your Messages Don’t Come Across As Rude. Duh

Bare text does not communicate your tone, so be aware of your word choice so you don’t come across as abrasive, cold, or passive aggressive. You might think you’re being kind by asking, “What do you want?” but it could also be taken as a more accusatory, “What do you want?”

“Even though life can feel more relaxed in cyberspace, there’s a code of conduct and unofficial rules that govern online interactions and behaviors.” — Erin Jansen, Founder of NetLingo

“International or not, texts and emails can sometimes come across as rude,” Erin told us. “It’s easy to misread between the lines, so just be nice.”

This should be common sense. Just because you’re communicating through a different medium, that doesn’t mean you can say and do whatever you want without consequences. And it definitely shouldn’t be an excuse to make lewd remarks to random strangers. That’s not going to win you many fans online. People will take you for a creeper or a troll and stop talking to you.

“If you wouldn’t act a certain way or say something in the real world, then don’t do or say it online,” Erin said. “Have fun meeting new people online, but stay safe and respectful at the same time.”

With these tips, daters can make a good first impression in a chat room, on a dating site, or over a text message. NetLingo Founder Erin Jansen makes navigating the web (and its complex language) more accessible through her informational website and helpful recommendations.

When I was going to school, shorthand like brb and ttyl came as second nature to me. I didn’t have to try to keep up with the way kids were talking because it was all around me, and I was part of it. Now, however, I get stumped by words like felfie and WiFive. A new batch of teens are shaping common abbreviations, so new internet terms are being added to our lexicon every day.

To stay up to date with the newest jargon, you can reference NetLingo’s vast online dictionary of web terminology. The site succinctly translates all types of net slang for you. From AFK to zipperhead, this list continues to grow to help you put your best foot forward online.

“There’s new terms being invented, created, and used every day,” Erin told us. “Things change so quickly online, my goal is just to adapt the site to be responsive to the modern landscape.”