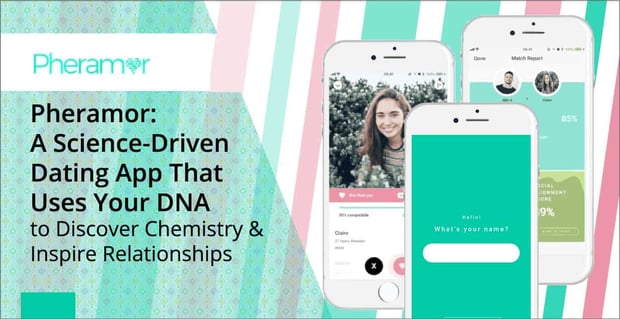 The Short Version: Pheramor is a unique dating app that uses DNA to find users the perfect match. The app launched in 2017 as a science-driven alternative to traditional dating sites and apps. Pheramor has run with the theory that genes can accurately predict physical chemistry and personal compatibility, and the app’s genetic analysis has seen success in the dating scene.

During graduate school, Dr. Brittany Barreto was listening to a lecture on genetics when the guest speaker raised an interesting point about how genes can influence social dynamics and interpersonal relationships. Brittany raised her hand. She wanted to know if it would be possible for a dating site to make good matches based on people’s genetic codes. “Could I make Geneharmony?” she asked.

The lecturer looked surprised by the question but answered, “I guess you could.”

The Pheramor app relies on attraction genes to determine compatibility.

A few years later, that’s exactly what she did. In 2017, Brittany teamed up with Dr. Bin Huang to co-found Pheramor, a dating app that uses genetic information to map out compatibility. Brittany has a PhD in genetics, while Bin has a PhD in computational biology. Their combined knowledge informs the app’s interface.

“I’m the visionary, and he’s the algorithm,” she told us. “He’s the technical IP behind Pheramor.”

On its surface, Pheramor works like a typical dating app. Users download the app on Google Play, create their profile, and swipe through matches. However, the dating company can also send a genetic swab kit and use an individual’s DNA to measure compatibility in a more scientific and efficient way.

The genetic component is optional, but it’s a lot of fun, so many users choose to take the cheek swab to up the quality of their matches.

“Our users are young working professionals,” Brittany told us. “They’ve been using dating apps for a long time, and they’re over it. They want to try something else, but they don’t want to pay for it. We provide that middle ground.”

Pheramor has revolutionized the way singles meet one another by adding a genetic element to the mix. The dating app offers free chat and matching services as well as a $40 genetic testing kit. You get the kit, swab your cheek, and mail it back to the Pheramor team for analysis. The lab only tests your HLA genes — the attraction genes — and it destroys DNA samples after use.

Subscribers then receive a thorough genetic report on attraction, which the app uses to generate a new DNA-based match every day. The dating profiles include basic information about the person’s occupation, location, and age as well as three conversation starters to generate topics for conversation. Users who have submitted their DNA can also view compatibility scores for social alignment and physical attraction.

Pheramor’s original matching process can make a great conversation starter as well. Many users enjoy discussing their thoughts on the science behind attraction. “We’re giving people icebreakers just by being who we are,” Brittany said.

Of course, Pheramor can only make hypotheses regarding compatibility — it’s up to singles to conduct the experiment until they get their desired results. “DNA isn’t destiny,” Brittany told us. “We can’t swab your mouth and deliver you a soul mate.”

Tens of thousands of open-minded singles have downloaded Pheramor and bought into its DNA-based matching system. Most of its users are between 25 and 40 and live in major cities throughout the U.S. They’re interested in trying something new and see Pheramor as a fun way to shake things up in the dating scene and meet intellectually curious singles.

“Finally, a company that is thinking of innovative ways to use technology to unite people,” said Omar Imam in a review. “I like how the app takes in multiple existing ways to match people together, and then layers advancements in genetic science over them.”

“The founders of this company are geniuses. — Safiya, a Pheramor user

Pheramor intrigues singles with its data-heavy match process. Sometimes its recommendations challenge singles to go outside their comfort zone and meet someone who isn’t exactly their type, but may have some attractive qualities nonetheless.

Brittany said she’s been gratified by how enthusiastically users have embraced Pheramor. “They’re leaning into the data,” she said. “They’re trusting in the data and giving people they normally wouldn’t consider a second chance.”

Online dating burnout is unfortunately a common side effect of meeting many people on apps and sites. On average, online daters spend about 90 minutes a day swiping and chatting, and sometimes active daters start seeing profiles as forgettable and dates as disposable. They’re constantly moving from one date to the next, so it’s difficult for some singles to find any lasting satisfaction.

“I can’t help but believe that online dating, in the way it dramatically increases the possibilities for easily meeting someone new, makes us treat each other more disposably,” said Sasha Cagen of QuirkyAlone.

Pheramor’s data-driven approach to dating appeals to many singles.

Brittany once counted herself among the frustrated online daters of the world. “I was fed up by the lack of strategy in swiping,” she said, “and I got more and more excited by the idea of using science to help people find love.”

She designed Pheramor to inspire singles to get out of their online dating ruts. Brittany encourages the burnt-out daters of the world to try something different, so they’ll get different results. Pheramor certainly is different. The app takes a scientific approach to love and uses DNA to recommend dates that have long-term potential.

Pheramor has facilitated many dates and relationships, and Brittany expressed confidence that the dating app can work — because it worked for her. She met her boyfriend, Ferris, on the app. Brittany said she likely would’ve passed on this lovable red-headed guy if they’d met in real life or on another dating app. However, because she knew they were genetically aligned, she gave him a chance, and now they’ve been together for nearly a year.

The Pheramor team has also branched into the relationship space with We Have Chemistry, a genetic kit designed to reveal love alchemy. The team works closely with psychotherapists and geneticists to deliver insights into what makes a relationship last.

Brittany and her innovative team are changing the dating scene one data point at a time. When singles want an alternative to online dating, they can turn to Pheramor, and, when couples want to strengthen their relationships, they can turn to We Have Chemistry.

Brittany has turned heads with her dating app, and her success has prompted seasoned dating professionals to see the industry from a new perspective. In 2018, Brittany spoke at the European iDate Conference in London to share her thoughts on the future of online dating and the role science can play in love.

Dr. Brittany Barreto educates people on the science of attraction and love.

As a thought leader and guest speaker, Brittany can influence other professionals to implement smart strategies to improve the dating ecosystem.

“So many people are interested in learning more about the science of attraction,” she told us. “I describe the science in layman’s terms, and it’s really fun. People are fascinated by it.”

Brittany said she enjoys pulling back the curtain and teaching matchmakers, dating coaches, and others about the science behind romance and relationships. Her presentations offer professionals a refreshing reminder that there are many pathways to love.

Pheramor has applied proven genetic principles to the dating scene, but the team knows that there’s still a lot more to learn. So Brittany and Bin have partnered with the Kinsey Institute to research the science behind LGBTQ+ attraction and relationships. Currently, all 26 publications on attraction genes have focused exclusively on heterosexual relationships, and Brittany is determined to change that by delving into an often-overlooked topic.

By studying the genes of same-sex couples, the researchers intend to learn about the differences or similarities between heterosexual and homosexual relationships.

“We want to use the data for good,” Brittany said. “Our mission is to empower people to connect and fall in love. That’s something we take seriously.”

Inspiration struck Brittany years ago when she learned genes can impact relationships. As a graduate student and single woman, she saw a real-world application for these genetic findings. Now Brittany has left the classroom and become a leading entrepreneur in the dating industry. Her science-based approach to online dating has resonated with singles who are looking for a rational solution to dating obstacles.

Pheramor has shaken up the online dating scene by letting your DNA lead the way. The app’s genetic test delivers actionable insights into your attraction genes, and that information can guide you to the right match.

“My end goal is to end isolation through innovation,” Brittany said. “That’s one of our core principles as a company. We’re all about trying to get people to be more human, and I think we can do it through technology.”