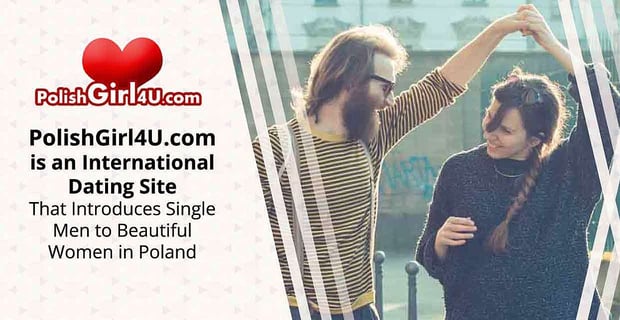 PolishGirl4U.com is an International Dating Site That Introduces Single Men to Beautiful Women in Poland

The Short Version: PolishGirl4U.com connects Polish women with 60,000+ single men living around the world. These singles go online seeking an international romance, and they’re welcomed by a safe and friendly dating environment. The PolishGirl4U team carefully vets all profiles on the site to ensure its members maintain high standards for courtesy and honesty. It’s free to join, and female members receive unlimited communication for free as well.

A Polish web developer named Maciej Balonis moved to Ireland over 10 years ago for his job. He and his wife fought fairly often, so he spent many of his evenings out of the house and at the local pub.

One day, a stranger struck up a conversation with Maciej. They talked about their lives and their jobs, but mostly they talked about love. The stranger said he didn’t love his wife, and he wished he could meet someone who would create that spark that lasts a lifetime.

As he spoke, two lovely women stood up from the bar, walked past them, and gave them a friendly smile. The man nodded back, saying, “I would like someone like them.”

A lightbulb went off for Maciej in that moment. Those two women were Polish, and he knew many women like them back home. “I realized that Polish women are appreciated by men all over the world, and I thought, ‘I could do this. I could create a place on the internet where Polish girls can find a man and vice versa,'” he said.

“PolishGirl4U was my own idea, my own project,” Maciej said. “It took some time, but it finally started to happen that we had success and started hearing from users who found someone.”

Today, Maciej and two other men keep PolishGirl4U growing at a rapid pace while maintaining a safe environment where singles can meet people across borders and fall in love despite differences in nationality and culture.

Women Can Join & Chat for Free

PolishGirl4U has a small yet dedicated membership base. Over 60,000 men around the world have signed up seeking romance, and the dating site is always seeking to bring in more Polish women to meet that need. Women can sign up to the dating site and use all its features for free, so there is no barrier between them and a new connection.

The women on the site range in age from 25 to 65, but the majority are in their 30s and 40s. The site requires its members to fill in every detail of their profiles — no space can be left blank. This makes it easier for people to get to know one another and discover commonalities that much sooner.

PolishGirl4U attracts men from Europe, North America, Asia, India, and other parts of the world. Visitors can register using an email, which is verified for authenticity, and then submit basic personal data to complete their profiles. Men can choose a nickname to use on the site to protect their privacy.

Users can search for potential matches by name, age, or city. This allows people to quickly narrow down the singles database to viable date prospects. Only paid members and women can chat on the site.

A unique feature on PolishGirl4U is an automated chat invitation. Members on the site can put in specific age and location parameters for a potential match and send a chat invitation to every member who fits these criteria. The message will pop up when that member comes online to let them know someone is interested in them. They can then start a conversation. This helps members break the ice more quickly and initiate friendly discussions with the kinds of people they’re interested in meeting.

Maciej said that every feature on the site is designed to keep members actively engaged and excited about the dating experience.

“I personally believe that there is something magical or metaphysical between people,” he said. “When people are destined to meet, they will meet. This is just another place you can find other men or women all over the world.”

Safety is a top priority for the PolishGirl4U team. Online daters put their hearts and their personal information on the line when building a connection, so they need to be confident that the people on the other side of the screen are who they say they are. That’s a tall order, but the PolishGirl4U team has implemented several security measures to keep the dating site a safe and friendly place to mingle.

First of all, PolishGirl4U has a rigorous screening process. The dating site automatically reviews all new profiles and checks them for various red flags. Then a trained moderator manually goes through the profile before it goes live on the site. This process is the same for men and women on the site.

The moderator looks for suspicious and incomplete content, including fake photos, and removes dating profiles that appear disingenuous. This screening process ensures that spammers have a difficult time gaining access to PolishGirl4U.

Searching the PolishGirl4U site for a pen pal is free, and men can pay to send messages.

The payment plan for men also helps PolishGirl4U keep non-serious daters off the site and away from serious members. All men on PolishGirl4U must upgrade their accounts to a subscription plan if they want to communicate with anyone online. Only paid members and women can send messages here. This payment wall allows women to feel confident the men they’re speaking to are invested in finding someone special and not just there to take advantage of them.

“Scammers can be a major issue online. I hope Information Technology will solve this problem,” Maciej said. “We’re working on a feature to make the site safer and more reliable because that is the most important thing for us. When you’re on a dating site, you want to be sure you’re talking to a real person who’s interested in you.”

PolishGirl4U members can help the team keep watch over the site by reporting anyone behaving inappropriately. Maciej said the women on the site are particularly vigilant and often send helpful notes regarding activity on the dating site. By taking both proactive and reactive measures, the PolishGirl4U team can police the site and create a safe place for singles around the world.

One Man’s Passion Project Creates Love Around the World

Maciej knows for a fact that PolishGirl4U can work — because it worked for him. After his divorce, he joined the dating site he created and found love in its database. He told us he is now happily in love with a woman he met on PolishGirl4U. They now live together in Poland.

“I joke to my friends that I had to build my own website to meet Magda because I would not have met her in real life,” Maciej said. “We are happy together to this day, so that is one of the true stories of finding love on the site.”

Of course, Maciej and his girlfriend have had their ups and downs, but the good in the relationship outweighs the bad as far as Maciej is concerned. He said he hopes his website can bring similar joy and laughter to other men’s lives by introducing them to caring women in Poland. “I know the meeting isn’t everything,” he said reasonably. “It’s only the first step.”

PolishGirl4U helps singles navigate this first step with greater confidence and expediency. The dating site has led countless individuals to form new friendships and find loving partners in nations across the globe.

Over the years, Maciej has received many thank-you notes from couples who said they met on the site. Most of them — including a woman in Poland and a man in Norway — said they never would have encountered one another if not for the dating platform. Maciej said he sees PolishGirl4U as an international force for good in the dating scene. “It’s a lovely feeling for me to be someone who can help other people,” he said. “It’s just great.”

Maciej experienced firsthand the joys a dating site can bring. Since that conversation with a stranger at a bar, he has dedicated himself to making the online dating scene a more hospitable and romantic place for men and women all over the world. He created PolishGirl4U to help single men connect with women who genuinely desire a relationship.

Today, the dating site maintains a growing membership base of singles who have been vetted and approved by the team. Its security measures, live chat features, and simple search tools make it easy to find someone worthwhile on this site. Whether you live in Poland or abroad, you can sign up for free to see for yourself what PolishGirl4U is all about.

“I believe in the possibility that you are destined for someone in another part of the world,” he said, “and without the internet, you wouldn’t meet that person. It wouldn’t be possible. I narrow the possibility of meeting that person with PolishGirl4U.”