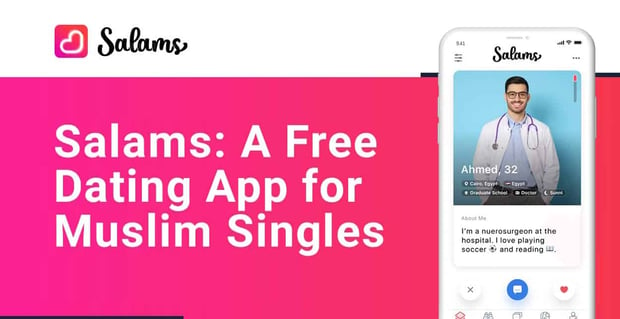 The Short Version: Salams (formerly known as Minder) has paved the way for friendships, relationships, and marriages in the Muslim community. The dating and social networking app has over 2.5 million users in 100 countries, and all of them are looking for Muslim connections. Over the years, Salams has collected success stories from many couples who have found love in the swiping scene. The team estimates that Salams has led to over 25,000 marriages so far.

Dating can be difficult because so many preferences, values, and goals tie into it. People who have a strong sense of faith may tire of running into date prospects with differing belief systems or incompatible viewpoints. Muslim singles are often looking for a like-minded partner with similar ideas and a shared cultural understanding, and sometimes a mainstream dating app doesn’t cut it.

A small, international group of Muslims pooled their talents in 2015 to create a meaningful dating resource for Muslim singles. The dating app Salams was originally intended as a marriage matchmaker, but it has since grown to encompass general networking and Muslim friend searches.

“It has recently expanded to include friendship and networking since we heard from many users that it’s a feature that they wanted,” a spokesperson for Salams said. “The app is built by a small, global team of Muslims.”

Of course, love and marriage remain an important part of the Salams dating experience as well. A Muslim person who is looking for a significant other or spouse can still use the swiping tools for that purpose. The dating app gives individuals control over their matches, so they can pursue their own interests and engage in conversations on their terms.

Salams has so far supported over 2.5 million users in the online dating scene. The app is available in over 100 countries and has been translated into seven languages. The core of its user base are English speakers in the U.S., the U.K., and Canada.

The Salams team has made a concerted effort to protect user privacy and uphold authentic relationships. Its advanced settings help real people form mutual matches and create the foundation that can last.

While other swiping apps focus on physical attraction, Salams digs deeper into personality traits, cultural background, and core beliefs to power its matchmaking. Sometimes photos don’t even come into the picture, so to speak, until a strong connection has been built.

“In many countries, users can choose to blur their photos and then unblur to a specific match whenever they’re ready,” a spokesperson for Salams told us.

Salams has a stealth mode for users who want to keep a low profile online. This mode allows individuals to choose who can view their dating profile. Only people you have liked will be able to see your profile.

Users can also hide their online status if they’d prefer people not know they’re currently on the prowl.

“We understand that many Muslims want privacy while searching for their future spouse so we built features to cater to that,” the team said.

A free membership on Salams includes basic swiping, matching, and chatting features. But only premium members have unlimited swipes and can see who has liked their profile. Premium members also have access to upgraded search filters for education, origin, and other important dating criteria.

Salams has put security measures in place to ensure fake profiles are not a problem in this niche community. All profiles have been verified with a selfie that users can only take within the app. The selfie is not published and is used for verification purposes only. A member of the customer support team must approve the selfie and the profile for it to be added to the swiping list.

Every user is presented with a screen asking them to agree to be respectful and serious in the app. They must obey the community guidelines, or they will not be on the dating app for very long.

Profiles on Salams include standard demographic information — gender, location, and age — as well as answers to fun topic questions and Islamic themes such as prayer levels.

“We highlight the emphasis on marriage throughout the app, including with a profile attribute and filter for ideal marital timing or when someone would ideally like to get married,” the Salams team said.

Responsible for Over 2 Billion Matches & 25,000 Marriages

Salams welcomes single people who are interested in Muslim friendship, networking, or marriage. The dating app helps spark conversations through text and video chat, and individuals can take things to the next level by exchanging numbers or planning dates.

Salams has been the starting point for plenty of success stories over the years. The team has heard from many couples who have gotten engaged or married since meeting on the app. According to internal estimates, the Salams app has made over 2 billion matches since 2015, and those matches have led to approximately 25,000 Muslim marriages.

Rawan A. met her future husband on Salams in the spring and was engaged within a matter of weeks. The Muslim couple are currently planning their wedding. “The conversation was so easy and he was so sweet; we quickly exchanged numbers and hopped off the app,” Rawan wrote in her testimonial. “Our wedding will be next November inshallah.”

VICE reporters praised Salams as the “Muslim Tinder” and said they had a lot of positive experiences when exploring its match lists over the course of a month. “People’s bios were intriguing. Islam was everywhere, gushing out like hot lava from everyone’s profile,” one Muslim woman said.

Many people support the Salams mission and have helped Muslim love blossom around the world. Want to be a wingman or a matchmaker for a Muslim friend? Then you can get a gift card for a Salams Premium membership and send it to a single person who could use a little swiping assistance.

Muslim singles don’t have to settle for mismatches and incompatible dates in the mainstream dating world. They can find a community of their own and build relationships that have the potential to last a lifetime.

Salams has given Muslim men and women the opportunity to pursue their interests and find a like-minded partner or friend online. The dating app has millions of profiles in its database, and facilitates new matches and success stories all the time.

While Salams began as an app for people seeking matrimony, it has grown bigger than that. It can be a space for platonic friendships and deep conversations. It can give lonely Muslims a sense of belonging and provide opportunities to socialize with people who prioritize faith, love, and commitment.

“Our future plans are to continue helping Muslims connect in meaningful ways,” the Salams team said.