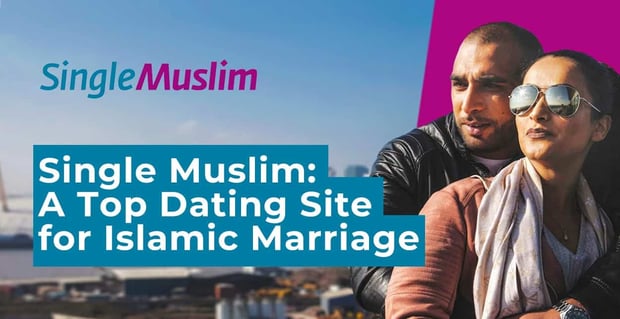 The Short Version: When Single Muslim launched in 2000, it was the first dating website to market directly to marriage-minded Muslims in the U.K. The site’s founder Adeem Younis drew inspiration from his frustrations as a Muslim single in the modern dating scene. He developed a tech solution to unite faith-driven individuals at a time when online dating and Islamic dating both carried a negative stigma. Today, Single Muslim boasts having over 3 million members worldwide, making it the largest and longest-running Muslim dating network in the industry. Single Muslim is available as a free desktop site and dating app on Google Play and the App Store.

Adeem Younis had just celebrated his 18th birthday in 1998 when his mother sat him down for a serious discussion. He was a man now, she explained, and it was time for him to get married. Growing up in the Muslim faith, Adeem understood the importance of his role as a husband — but he hadn’t expected it so soon.

“I thought I would get married five or 10 years down the road, but, no, mum wanted me to get married the summer after my 18th birthday,” he said. “Muslims don’t date. Muslims marry.”

Adeem’s mother was prepared to fly her son from the U.K. to Pakistan to marry his first cousin. But he wasn’t exactly thrilled by that plan. His mother told him she would consider any bride prospects he found in the meantime. So, Adeem did what any tech-savvy teenager with a dial-up connection would do, and he began looking for eligible Muslim women online.

Adeem’s search didn’t yield him a wife, but it did yield him a career path. He discovered the online dating industry didn’t have an established matrimony site for Muslim singles, so he began building it himself. His goal was to create a platform that would advance traditional Islamic values for a new generation.

Single Muslim has over 3 million members around the world.

Single Muslim launched in 2000 with tools that empowered individuals to find their ideal Muslim bride or Muslim groom — without their family’s intercession.

Over the last 20 years, Adeem has gone from a young self-starter working in an office above a pizza joint to a successful CEO in charge of the largest Muslim dating service on the web. Single Muslim has over 3 million users worldwide and has been responsible for over 100,000 marriages.

“Marriage is half of the Islamic faith,” he said. “Marriage is so important for the individual, the family, and the community as a whole.”

Single Muslim aims to provide a solution for a single person who wants to date and marry within the Islamic faith. Members don’t necessarily have to be Muslim themselves — they just have to be open to a connecting with a Muslim partner for the long run.

Adeem told us the niche dating site has proven popular among Muslim professionals with disposable incomes. Such individuals tend to have high hopes for the future and high standards for their dates. They often find dating within the Muslim community is more fruitful because everyone’s religiosity is in line.

Single Muslim members share similar values, traditions, and ways of life, so they are naturally more compatible in relationships and marriages.

Members can create a dating profile for themselves or for someone else (usually a family member), and they can fill in a lot of personal information about their background, occupation, and religious practices. Single Muslim profiles focus on deeper values to help individuals get to know one another before they even say hello.

The Single Muslim team keeps abreast of the needs and interests in the Islamic community and develops user-driven features to improve the online dating experience.

When the COVID-19 pandemic hit, it sparked a loneliness crisis in the dating scene, and Single Muslim was on the front lines. Starting in spring of 2020, Single Muslim saw a 30% increase in online traffic as individuals sought out ways to connect while maintaining their social distance.

Stripped of distractions and routines, many singles found themselves feeling lonely and disconnected during lockdowns. That time of introspection has motivated many single people to date with greater purpose and hopefully find a lockdown partner.

“We’ve had a lot of success stories throughout the last year,” Adeem said. “I just want to say to all the single people out there: You are not alone. Just because you can’t meet in the physical world, you can still start a meaningful relationship by having an online conversation, so don’t give up.”

“We actually ditched the tech, which sounds strange coming from a tech company,” Adeem acknowledged. “Our headhunting team works with people to understand more than technology could ever understand. We understand their needs, desires, and what they have to offer a future partner.”

Responsible for Over 100,000 Muslim Marriages

Single Muslim has a team of about 30 people in the U.K. It is a 100% British company and does not outsource any of its operations. All team members are currently working from home, but they will return to the headquarters once it is safe to gather in person again.

One of the biggest priorities for the Single Muslim team is ensuring that the dating site and app only serve genuine people with honest dating intentions. The moderators work tirelessly to create a safe and friendly environment where Muslim relationships can thrive.

“Safety is huge, and we want to use AI to help us maintain the highest level of safety,” Adeem told us. “About 70% of human resources are used on safeguarding and vetting.”

The dating platform’s advanced algorithm can flag suspicious content, but it’s a human team member who reviews the profile or message and decides how to address an issue. Single Muslim has a zero tolerance policy with regards to hate speech, radicalization, and online harassment. Members cannot even curse on the website or app.

As a result of its commitment to quality, Single Muslim has seen many success stories that have gone from promising matches online to real relationships offline. Since 2000, Single Muslim has facilitated over 100,000 marriages in the U.K. and abroad.

Celina was born in the Netherlands and raised within the Muslim faith. She identifies as half-Dutch and half-Ghanaian. When it came time for her to marry, she wanted a partner who understood her diverse background and faith. She went on Single Muslim and found everything she wanted in Ahmed’s profile.

“I looked for someone who was dedicated in his prayer,” Celina said. “I was looking for someone taller than me too.”

After two months of chatting on Single Muslim, Ahmed flew from the U.K. to the Netherlands to meet Celina and her mother. Their Muslim love story grew from there. The couple are now happily married.

Single Muslim has put many love-driven singles on the fast track to their happily-ever-after ending.

Umair noticed Zainab’s profile in January 2013 and sent a message. She saw it and responded several weeks later, and he answered within an hour. The couple started messaging every day. Soon after, their families met for lunch and started making marriage arrangements. Umair and Zainab got married in September 2013.

“For me, and for every other Muslim, marriage completes half of your being,” Zainab said. “Umair really looks after me.”

Single Muslim stands out from its competitors because the team’s definition of success cannot be found in registration numbers, swiping statistics, or even revenue. The dating site is successful when it sees a single person matched with a future spouse. Every marriage is a testament to the powerful impact the right match on the right site can have.

As a teenager, Adeem saw the potential of online technology to heal the divide between family pressure and youthful hopes. He created Single Muslim to foster modern relationships grounded by traditional Muslim values and expectations.

Even after two decades of working in the dating industry, Adeem said it still gives him goosebumps to think about all the friendships, relationships, and families that have been possible because of Single Muslim.

“It’s the best feeling in the world,” he said. “To help people fall in love is a beautiful feeling. It’s really rewarding work.”