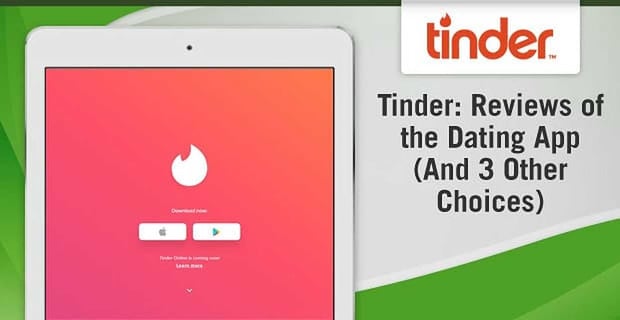 Tinder: Reviews of the Dating App (And 3 Other Choices)

Tinder’s reviews can vary from person to person, and your overall experience really depends what you’re looking for and how much effort you’re willing to put into it.

A couple of my very best friends are on Tinder, and we often gossip about their adventures (the good, the bad, the awkward, and the just plain weird) and comparing notes. They’ve had flirty chats, gone on exciting first dates, and met some awesome people, but they’ve also encountered a fair number of creeps and weirdos — and dick pics, of course.

We get a lot of singles coming to us asking about Tinder — how it works, who it’s for, and if it’s any good — so we’ve put together a full Tinder review to answer all those questions and more. We’ve also provided three alternative dating apps for you to try along with, or instead of, Tinder, if you decide it’s not for you.

Tinder: Free, Fun, Popular & Successful, But Singles Have to Register via Facebook (4.5/5.0 Rating)

The numbers behind Tinder are staggering — the app has been downloaded over 340 million times. It has members in over 190 countries and who speak 24 different languages. It facilitates 1.6 billion swipes a day and 1.5 million dates a week. Since its launch in 2012, Tinder has created over 43 billion (yeah, billion with a B) matches around the world.

Tinder also has four stars on iTunes and Google Play, and the vast majority of singles in their 20s have given it a whirl hoping to find a distraction, a fast date, or a lifelong love.

By now, most people should be familiar with the way Tinder works. The app pioneered swipe-based matching when it launched in 2012, but now that’s pretty much standard operating procedure for all dating sites and apps worth their salt.

Tinder is easy to understand and easy to use. You sign up through Facebook, and the app pulls your information (name and age), photos (one main photo and five others from Facebook or your phone), and location. There’s also a section for including things like your gender and where you work or went to school. Tinder also learns from Facebook who your mutual friends are, so it can suggest people who mingle in similar circles but may not have run into you yet.

Tinder will never post anything to Facebook, and no one will be able to tell you have a Tinder account by looking at your Facebook. The dating app uses social media integration to verify identities, not out singles. You can also sign up through your phone number if you don’t have a Facebook account or don’t want it connected to your dating profile.

Tinder is available for free via the App Store and Google Play and requires you to have a Facebook account to create a profile.

Tinder will use your profile information to make match suggestions, and you’ll swipe right on the people you like and left on the people you don’t. Liking or Super Liking a profile is a way to show your interest and invite someone to have a conversation. Messaging only becomes available after two people swipe right on each other, and members will never know who swiped left on them.

Members also have the option to sync up their Instagram and let potential matches see a portion of their feed such as the 34 most recent photos.

Tinder says it’s good for hookups, dates, and relationships, but because of this somewhat addicting and appearance-based matching system, it tends to be more for hookups than anything else. There’s no shame in the Tinder game, and singles tend to be up for anything.

Tinder Plus and Tinder Gold subscriptions offer access to premium features, including unlimited likes, the ability to unmatch with someone you previously matched with, revisit users you passed on, and access Tinder Passport (browse profiles in other locations, like for vacation, before you get there). Tinder Online is an upcoming free feature that will let singles swipe from any browser, on any device, and anywhere in the world.

Over the years, Tinder has received a lot of positive feedback from singles. Some people have even said they met their future husband or wife on the app, including Selena B., who wrote this review:

“I just said I do yesterday to my husband who I met, yes, on this app. I want to thank this app over and over. As I’m writing this, I’m laying down on my husband’s chest while he sleeps… because of Tinder.”

On the flip side, some of the biggest complaints we’ve heard and read about Tinder are that singles have to have a Facebook profile to sign up, pricing is based on age and location, and men seem to have less luck than women.

In terms of the Facebook complaint, we can see why it would make some people uncomfortable, but Tinder uses Facebook profiles as a way to prove each member is who they say they are. Plus, the app promises to never post on your Wall on your behalf, so you really have nothing to worry about.

“I would have liked to register my account without the help of Facebook as I wanted to keep it as private as possible.” — David, of Buffalo, New York, said on ConsumerAffairs.com.

Tinder charges different prices based on the user’s age and location. Singles who are over 30 pay more for their subscription than singles in their 20s. Co-Founder Sean Rad explained the app’s unique, and somewhat controversial, pricing model in an article on Business Insider, “Our intent is to provide a discount for our younger users.”

In regards to charging different prices in different locations, Sean said, “It’s not about necessarily optimizing for the dollars we bring in. It’s about optimizing for the number of people we can bring in. If I live in an emerging country or somewhere with an emerging economy, I can’t afford to pay as much as someone who lives in the U.S. There are some things we have to consider.”

Lastly, another common concern about Tinder is that since profiles are so focused on photos, rather than information about the person, more attractive people, particularly women, have the most success. Yes, members have the option to look at others’ bios and Instagrams, but how many people will actually take the time to do that? Almost none.

Since Tinder profiles are so photo-focused, a lot of men who consider themselves to be average-looking say they don’t have as much luck as men who may be more attractive.

Marcus Walker is one of those men who finds this to be a major issue on Tinder, and he wrote on Google Play:

“If you’re male, this is only useful if you’re incredibly attractive. I haven’t had any luck on this app. It seems to be primarily for hookups, not dating. I even tried premium and couldn’t get any matches with a Boost and non-stop swiping. I cannot recommend this app to anyone who’s average or below looking. It’s a self-esteem destroyer, waste of time and money.”

Below are three other dating apps that offer a good alternative to Tinder. The similarities are that they offer free memberships and location-based matching; among the differences are that you don’t have to sign up through Facebook, and the pricing models don’t support age discrimination and will be standard for all customers.

On this list, Zoosk is the most like Tinder. It’s integrated with Facebook, as well as Google+, but you also have the choice to simply create a profile via the app or homepage if you prefer to use a desktop. You can do this for free — plus the app won’t charge you for browsing, receiving matches, sending likes, and communicating in certain ways.

The user base isn’t as large as Tinder, but it’s still extremely impressive: 38 million from more than 80 countries and who speak 25 different languages. The app’s Carousel feature is just as fun as Tinder’s matching system, too. You’ll be presented with a photo (in addition to the person’s age, location, and gender), and then you’ll tap the heart icon to signal yes or the X to signal no.

We all have heard of Match — after all, it’s been around since 1995 and has led to more dates, relationships, and marriages than any other dating service. Its app hit the scene in the mid-2000s and has proven that Match has still got it. The Match app currently has a 3.8-star rating in the App Store, and our dating experts give it 4.9 stars.

A basic membership (which offers profile creation, several photo uploads, searching, match recommendations, and Missed Connections, among other features) is 100% free, while premium memberships start as low as $5.46 if you use the 74% discount.

This app has 77 million members — 27 million more than Tinder — and makes your privacy its number one priority. Another component of Adult Friend Finder we like is that you can view members who are online at the same time as you, so you can initiate the conversation and meetup plans right away.

Tinder — A History-Making Dating App, But Don’t Limit Yourself!

My friends like Tinder (even when crazy stuff happens), but they’re also on two or three other dating apps just to see which is best for them. Dating is a numbers game, after all, and you can improve your chances of meeting someone special just by opening another free account on another dating app or site.

With all the information above, we’ve given you a lot to think about. But the real test will be downloading Tinder, as well as one or two of the other apps, for yourself and making up your own mind. At the very least, you can dip your toe into the swiping scene and see if anyone is worth giving a like. Good luck!

The Best and Worst Effects Tinder Has on Dating