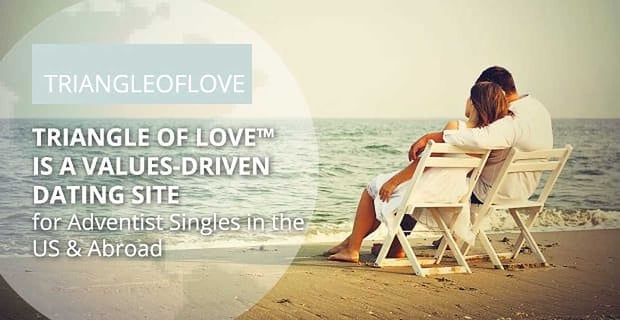 The Short Version: Launched in 2009, Triangle of Love offers Adventists a God-centered dating experience in a safe online community. This niche dating site has helped over 100,000 members build relationships with people in the Seventh Day Adventist Church. An Adventist named Edward created and now manages the site to support Adventist values in the dating world. Some of Triangle of Love’s unique features include a verse of the day, an interactive commenting system, free video uploads, and secure IP tracking. The dating platform has the look and feel of a social networking site, which makes newcomers feel welcome from the moment they sign up. Furthermore, Triangle of Love’s paid subscription plan ensures that only legitimate and serious online daters can communicate with one another here. If you’re seeking a partner in faith, Triangle of Love just may be the answer to your prayers.//

Dating someone outside your religion can be difficult, especially if one or both of you are devout believers. You’ll undoubtedly have at least a few disagreements about child-rearing, family traditions, dietary habits, and other essential life choices. You could also face disapproval from your family members or your church. In many ways, you could potentially undermine your happiness by choosing a partner who is fundamentally incompatible with your beliefs.

Members of the Adventist Church share an outlook on the world that’s enlightened by the teachings of Holy Scriptures.

For that reason, many religious singles prefer to date someone with the same beliefs. Members of the Seventh Day Adventist Church tend to be particularly passionate about intertwining their faith in God with their personal relationships. However, if you’re Adventist, it can be hard to meet people within the same religion after you’ve exhausted your connections in the church.

Edward discovered this for himself when he started dating within the Adventist community in 2009. He found his options limited at church and decided to try online dating — but he wasn’t wowed by the options there either. He didn’t like that most Adventist dating sites were owned and operated by people outside the faith. He felt these sites didn’t reflect the values of the Adventist Church and lacked an awareness about what Adventist singles needed to successfully find love.

So, Edward decided to create an Adventist-only dating site as a way of giving back to the community and furthering the faith. He started a dating platform called Triangle of Love to meet the needs of Adventist daters seeking a values-based relationship. He named the site “Triangle of Love” to represent the relationship between God, man, and woman.

Edward said he can relate to his users because he belongs to the same religious group and has the same priorities when it comes to romance. “I was once in their shoes,” said the Founder of Triangle of Love. “I know how frustrating dating can be, particularly for Adventist singles.”

Edward is now happily settled with an Adventist wife, and he hopes to help other singles discover the same fulfillment and joy in their lives.

A Membership Fee Ups the Caliber of Users on the Website

Triangle of Love is the most popular niche dating site for Adventist singles with over 100,000 users around the world. Edward said his users range in age from 21 to 79, but the majority are relationship-minded folks in their 30s and 40s.

The gender split on the niche dating site is relatively equal with women representing 55% of users and men representing 45%, so it’s a relatively even playing field for both genders. Triangle of Love has a strong presence in the US — 60% of users are Americans — however, the international network is rapidly growing in South America and Europe as well.

Singles can browse Triangle of Love for free, but they have to upgrade to a monthly membership plan to send or receive messages, comment on posts, and read the comments on their posts. Subscribed members also no longer see ads on the site. Edward said he implemented paid membership plans about a year ago to raise the caliber of members on the site. As a result, everyone sending messages on Triangle of Love is serious about investing in their romantic future and meeting someone within the same faith.

“It changed the kind of people who join the site,” Edward noted. “Triangle of Love members are serious about finding a long-term relationship.”

Once you’ve signed up to Triangle of Love, you can upload an unlimited number of photos to your profile — some have as many as 300 added. The dating site mimics a lot of popular features of social networking sites, most notably the ability to write on the walls of other members. Members can also share videos and comment on pictures. Overall, this casual public forum fosters a low-key community feel that’s perfect for shy daters who may not feel ready to initiate a one-on-one chat.

Safety Measures Protect the Integrity of the Community

Triangle of Love wasn’t created by a white-label dating company intent on covering every niche possible — it was created by an Adventist man who understood the dating challenges faced by members of this community. He set out on a goodwill mission to connect singles in the Adventist church.

Today, Triangle of Love offers a safe online environment for singles to start a conversation and find a compatible first date. Ironclad security measures, including encryption technology and IP tracking, keep out suspicious users. The team also has mobile phone verification to keep users from creating multiple accounts for themselves. When there is a discrepancy between the country code and the country listed in their profiles, they flag that profile for review.

Triangle of Love is an upstanding dating site for Adventist singles who prioritize their religious values.

Edward said he’s committed to cultivating an online network of legitimate members and doesn’t hesitate to suspend the accounts of anyone exhibiting unwanted behavior, including sending spam messages or uploading stock photos. All users are required to have at least one photo of themselves. Users can appeal to Triangle of Love if their accounts get suspended by sending a valid form of ID or other proof of identity.

Looking to the future, Triangle of Love has plans to expand its network and create more fruitful relationships between Adventists. Members can expect a mobile version of the website to be released by the end of this year. Edward said he’s also looking into adding background checks to Triangle of Love in the coming years. “It might help clean up the community a little bit,” he said.

On a Mission to Help People Date & Marry Within the Faith

When a Triangle of Love user closes his or her account, a text box asks them why they no longer need or want their membership. These former members have the opportunity to give useful feedback or share their success stories. Happily matched individuals often provide heartfelt testimonials about how Triangle of Love helped them find their partner for life.

“I can’t even keep up with the number of relationships and marriages that have formed on the site,” Edward said. “That’s what drives me.”

Some Triangle of Love couples upload photos of themselves along with their testimonials.

Every couple of weeks a Triangle of Love member sends Edward a message saying they’ve met someone special, have gotten married, or are expecting a bundle of joy because of the dating site. These messages are inspirational to Edward because that’s why he started the dating site in the first place — to foster real relationships between Adventists around the world.

“When you receive those emails, it just reaffirms that you’re doing the right thing,” he said.

Triangle of Love: An Inspirational Place to Find Love

Differences in religious beliefs and practices can be a dealbreaker in serious relationships because they speak to the core of who a person is and what they want from life. It’s only natural for members of the Seventh Day Adventist Church to want to build a relationship and start a family on the strong foundations of shared faith.

“A lot of people turn to online dating, and this dating site in particular, because they’re looking to find someone who shares their values,” Edward said. “Triangle of Love is a great alternative for Adventist singles looking for someone within the same faith.”