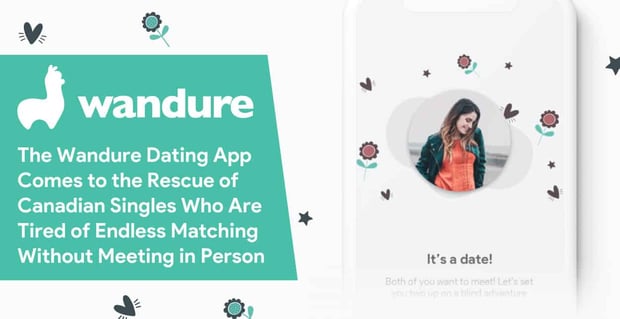 The Short Version: Some swipe-happy dating apps give singles virtually unlimited choices yet fail to offer guidance when it comes to sparking real-life dates. The result is a lot of matching online and not as much meeting in person. An up-and-coming dating app called Wandure is looking to change that by arranging first dates on behalf of its matched users. The Wandure team has created over 1,000 matches and facilitated more than 200 dates in the last year, and the app has proven successful in bringing singles into the IRL dating scene.

Online dating makes it easy for people to flirt behind the safety of a screen and keep themselves at a distance from their potential dates. They’re surrounded by choices, but that only makes it harder to settle on a choice date.

A data-loving European single on Reddit revealed that less than 2% of his messages led to real-life dates. He spent 500 days on OkCupid, sent over 220 messages to women, engaged in 44 online chats, and only got four successful dates out of it.

Many popular dating apps facilitate casual dating by giving singles the freedom to dip their toe into conversations and dip out once they get bored, make a new match, or see a shiny object. This swiping game may keep people constantly matching and chatting online, but it’s not very satisfying for people who are looking for a real relationship.

That’s where Wandure comes in. This dating app has shaken up the way singles meet one another in Canada by encouraging in-person dates over endless chats. The app plans and schedules the first date on behalf of users and only allows for limited chatting before they meet up in person.

Users can chat for 24 hours after matching, but then they have to meet in person to continue the conversation and unlock the messaging features on the app.

The original Wandure app paired up travel buddies, but it soon became apparent that its in-person meetup features were needed in the online dating world.

“The phenomenon of ‘matching but not meeting’ plagues modern online dating,” said Chelsea Sauvé, Co-Founder and Chief Communications Officer of Wandure. “The journey from conversation to meeting is one that many simply avoid or never have the joy of experiencing.”

As a proactive dating assistant, Wandure endeavors to inspire first dates between relationship-minded singles in Montreal and Ottawa. So far, the newly released dating app has inspired over 1,000 matches and 200 first dates.

In the wake of the Covid-19 outbreak, the Wandure team acted fast to facilitate digital dates to encourage people to continue connecting while maintaining proper social distance. This app has broken ground with its user-oriented features, and not even a pandemic can slow it down.

Throughout its history, Wandure has set itself apart from traditional dating apps by appealing to singles who are interested in building an authentic connection that starts on a dating app and continues in real life.

The current state of the dating world has led to a new lexicon. Swiping culture. Ghosting. Online dating fatigue. These terms describe the challenges faced by singles looking for a match, and it’s not always a pretty picture. Some singles have grown increasingly frustrated or jaded as they engage in conversation after conversation without getting the results they desire.

The phenomenon of matching but not meeting has become all too common on mainstream dating apps and sites.

One sure-fire way to get out of an online dating rut is by trying something new with Wandure.

Matching with someone without actually meeting them in person has come to define the user experience on many traditional dating apps. Millions of singles are stuck in a cycle of matching with someone, chatting with them, and then ghosting because they’ve matched with someone new. In such cases, potential relationships fizzle out before they even have a chance to begin.

It’s only natural for someone caught in this swiping loop to begin to feel worn out and maybe even a little jaded about dating in general. Online dating fatigue has become a real challenge for singles around the world.

“As a result of dating fatigue, many singles are no longer taking dating apps seriously,” Chelsea said. “Instead, they’re using dating apps casually for entertainment and fun. Meaning that meeting your matches isn’t top of mind.”

Authentic daters need not get frustrated though — they can get help by seeking out trustworthy resources and advice from experts in the field.

Many of Wandure’s team members have tried online dating in their personal lives, so they understand the frustrations and issues singles encounter on traditional apps, and they have worked hard to provide a proactive solution and listen to user feedback.

“We have first-hand insight into the realities of online dating,” Chelsea said. “Each founder has been ghosted, stuck in endless texting relationships, and been a shoulder to cry on for friends who have experienced the same.”

The digital world has made a lot of areas of life much easier, but some experts argue that it has done singles a disservice in the romance department. Apps and sites can offer a lot of swiping opportunities without providing many practical dating opportunities, and that puts the burden on singles to make something happen.

Wandure is different because it removes the pressure of asking someone out and plans the first date on behalf of two people who have formed a mutual match. After swiping on an attractive profile, they provide their schedules, agree to the date, and then decide what they want to wear. It’s as easy as that.

As social distancing becomes the norm, Wandure has also pioneered digital dates where users video chat and play trivia games to get to know each other while self-isolating.

On Wandure, singles don’t have the option to chat unless they both agree to meet up for a date.

“Wandure infuses modern dating with just that — dating,” Chelsea told us. “As the only app that plans the first date for every match, Wandure overcomes the indecision of when to ask a person to meet up and where to go — users simply have to show up.”

Many millennials have flocked to Wandure because they say they see it as a remedy to their biggest online dating complaints. It promotes serious dating and promises to inspire first dates immediately after matching. This allows singles to cut to the chase and get into the action sooner rather than later.

The Wandure dating process takes users from swiping to matching to in-person dating in a short period of time, and its date-planning feature can even handle booking and payment automatically. Whether it’s arranging a rock climbing excursion or coffee date, the Wandure app challenges users to get off their phones and connect with people by engaging in fun activities in the real world.

The in-app payment system also removes the awkward question of “who pays” from a first date and allows singles to meet on level footing. It’s an overall stress-free dating experience that has many singles excited about dating again.

“Wandure is designed for the user who craves an individualized, easy, engaging, spontaneous, and time-conscious way of dating,” Chelsea explained. “Wandure distinguishes itself from the herd.”

The Wandure team maintains that dating apps have a responsibility to help users get results, not just matches, so it has done the legwork to streamline swiping so it actually translates to first dates. Hundreds of dates have taken place in Montreal and Ottawa due to this innovative matching process.

Quality-driven singles no longer have to put up with an inbox of ghosted conversations because Wandure fosters a community where everyone is ready and willing to meet up and see where things go.

“In a market where 93% of dating app matches lead nowhere beyond the online sphere, we see a space for a restructuring of the dating app experience,” Chelsea said. “Traditional dating apps such as Tinder and Bumble leave daters with an abyss of endless texting and few dates. Wandure decided to change things up.”