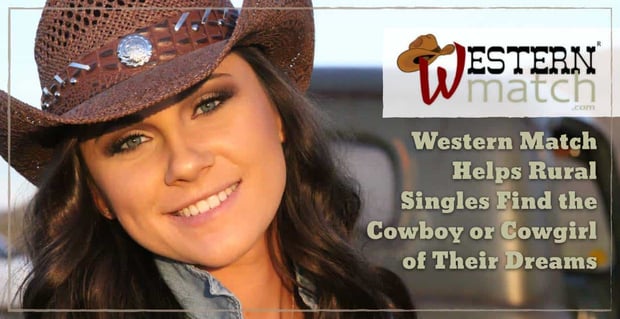 The Short Version: One in 5 Americans live in rural areas, but you wouldn’t know that by looking at modern dating sites. That’s because many of them cater primarily to city-dwellers who can quickly connect and meet up at a bar or restaurant. Western Match provides an alternative for rural singles looking to find love in more wide open spaces. The platform aims to help singles looking for partners who share their lifestyle, whether it’s cowboys, cowgirls, ranchers, or farmers. Western Match believes that if both partners appreciate the country lifestyle, they may be more compatible in the long run.

Having success with online dating can be hard enough in the city. For those outside urban areas, though, it’s often far more challenging. With 1 in 5 Americans living in rural areas, plenty of singles in the country are looking for a deeper connection with people who understand their lifestyle.

That’s why so many of those singles turn to Western Match to find compatible partners.

That includes Cody, who met his now-wife on Western Match in 2012. It was the first time either of them had used a website to find a date, but they started talking and eventually decided to meet in person. Their first date was at the Fort Worth Stock Show, a livestock show and rodeo held annually in Texas.

The couple hit it off, and it wasn’t long before they moved in together. In 2015, they got married.

As the couple noted in an online testimonial, “Some people laugh when we tell them we met online, but we don’t care. If it wasn’t for Western Match, we would probably never have found each other. We can honestly say that we believe God led us to Western Match so we could meet!”

Western Match has been helping those rural singles meet people they may never have crossed paths with since 2002, and the site is full of glowing testimonies.

Cindy, Owner and Founder of Western Match, decided to start the dating site nearly two decades ago because she saw that singles from the country had few online options.

“The country-Western community tends to stick with their own kind, so Western Match is the perfect community where individuals don’t need to sift through thousands of singles as they would on generic dating sites,” she told us.

For Singles Who Appreciate a Country Lifestyle

The core demographics of Western Match are ranchers, farmers, cowboys, cowgirls, and others who live in the rural parts of the United States and Canada. Still, though the country-Western lifestyle is often attributed to people in these countries, Western Match draws users from around the world.

Users range in age from 18 to 80, though the most common singles on the platform are over 40. But Western Match is also making a push to attract a younger clientele.

Many rural singles find difficulty on mainstream dating platforms because they must spend so much time sorting through potential matches who don’t share common interests. Not to mention finding someone that happens to live near them — or close enough that they’re willing to drive and take a chance on a date.

Western Match has been helping country-loving singles connect since 2002.

But Cindy understands the community well and operates the website with a small, passionate team.

“Knowing web design made it easy for me to create the homepage on my own. But I’m not comfortable enough to mess with the inside that runs the service. That is why I hired my programmer five years ago to help me out,” she said.

With such a dedicated team and a specific focus, Western Match helps satisfy the need of its narrow demographic. And it never wavers from that commitment.

Western Match makes the sign-up process simple and intuitive, so users don’t have to be tech-savvy to find love. Cindy wanted to design an interface that was user-centric and straightforward. And she wanted to ensure that the website would fit on any browser screen — desktop, mobile, or tablet.

Once users sign up, they fill out a one-page questionnaire with information relevant to other daters who may be searching for them. Next, they can add to their profile by uploading a photo and sharing additional interesting details about themselves.

The website even offers tips on choosing a flattering photo, which is key to making an excellent first impression.

“There’s no excuse for not having a photo with today’s technology, especially when you can take a selfie on your cell phone. You may receive up to 80% more response with a photo than without,” according to a blog post on the site.

Unlike other dating sites, Western Match doesn’t use an algorithm to pair singles who might work well together. Instead, singles can search for potential partners by using filters like age and location.

“We believe the only way of truly knowing if someone is a match is to speak with them personally. So, we don’t offer a very extensive matching system,” Cindy said.

Once users find a match, they have several options to take things to the next level. For example, they could “flirt” with their potential match by sending pre-written one-liners. They can also send virtual gifts, including a dozen roses or a box of chocolates.

If a user wants to interact with several people on the site, they can head to one of the platform’s chatrooms for a group discussion. Or if they like someone they’ve found on the platform, they can also chat privately in real time.

Western Match stands out in an online dating market filled with sites that cater to urban singles. Cindy has also recently unveiled a free version of the site, and she said she hopes it will attract even more singles.

“We decided to go free just this month and expect to draw an overwhelming amount of members due to this transition. We hope people enjoy our free service and help spread the word to others,” Cindy said.

Cindy also said that the site’s lack of affiliation has helped it stay true to itself. Instead of sharing members with other dating sites, Western Match has its own database of users who want to meet partners who share their values. If Western Match joined a network of dating sites, users may not always meet matches who value the country-western lifestyle that’s so important to them.

Further, users can feel safe when interacting on the site because it doesn’t store any financial data or share user information with other sites. Before new profiles go live, they are screened for legitimacy and accuracy.

“Since we manually approve profiles before going live on the site, we can continue to provide a more safe, fun, and friendly service to our members,” Cindy said.

With its unique position in the dating marketplace, it’s no surprise that Western Match continues to attract rural singles after nearly 20 years in operation.

“When I receive a success story or a brief paragraph telling me that a member found their match, it feels good to know that I helped someone find their potential life partner. It’s more about people than it is about receipts,” Cindy said.