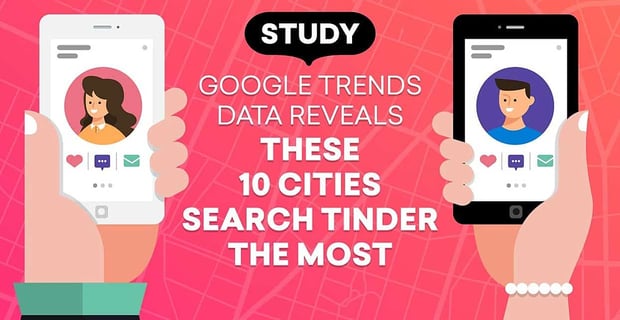 Tinder forever changed the dating scene when it launched in September 2012. The dating app pioneered a swiping system that encourages singles to treat love like a game of Hot or Not. And it has blown up.

We decided to dig deeper into those impressive numbers and find out which U.S. cities harbor some of the most active and enthusiastic Tinder users.

Tinder maintains an active user base in big cities from coast to coast, and online analytics can reveal where it is exceptionally popular. Google Trends assigned values from 0-100 to represent Tinder’s popularity in major cities. Its scores compare the number of searches for Tinder city by city. Check out the map below to see the top 10 cities where swiping culture is alive and well.

As you can see, Tinder is a widespread dating resource with followers on the East Coast, on the West Coast, and in the Midwest. Since its launch, Tinder has endeavored to start a social movement that empowers singles and facilitates relationships, and millions of Americans have jumped on board.

According to data collected from Google Trends, Berkeley, California, has the distinction of being the most Tinder-friendly city in the U.S. The liberal city saw the most searches for Tinder of any city, and thus earned a perfect score of 100 on Google’s sliding scale. Berkeley’s youthful population is undoubtedly driving Tinder’s popularity in the area. The median age in Berkeley is 31.4.

Berkley is home to the University of California at Berkeley, which welcomes over 30,000 undergraduates and over 11,000 graduate students every fall. All these intelligent and tech-savvy students have to find a date somewhere in the Bay Area or Silicon Valley, and it seems many of them turn to Tinder to solve their romantic problems.

Fort Collins may seem stuck in the past with its Old Town district, vintage trolley, and history exhibits, but its residents are almost as tech-savvy and date-friendly as Berkeley students. The Colorado city actually sees the second-highest number of Tinder searches on Google. It scored an 83 out of 100, which means a high concentration of singles are searching for a dating app to upgrade their love lives.

Fort Collins is a friendly, youthful, and tech-savvy city in the heart of Colorado.

As the fourth most populous city in Colorado, Fort Collins supports a thriving urban population, many of whom are students enrolled at Colorado State University or Front Range Community College. These universities help keep Fort Collins young. In fact, a majority of Fort Collins residents are under 45 years old. According to the 2010 census, 22.1% of residents are between 18 and 24 years old and 31.5% are between 25 and 44 years old. The median age is 29.3, which is significantly younger than Colorado’s median age of 36.7.

Some over-30 singles took to Reddit to complain about a lack of dating options in Fort Collins, but one person chimed in with some helpful words of wisdom: “There are attractive women everywhere. If you’re not a creep, I don’t see why you would have a problem.”

With a median age of 27.5, Ann Arbor is one of the youngest cities in the U.S. It also happens to be one of the most Tinder-friendly cities according to Google searches. Ann Arbor scored an 82 out of 100 on our value system.

It seems local Wolverines have a pretty positive outlook on swiping. As @UMich_Tinder writes on Twitter, “Tinder is how people meet. It’s like real life, but better.”

As with the other cities on the list, the university student population seems to be driving Tinder’s popularity in the region. The University of Michigan has over 63,000 students enrolled and offers over 275 degree programs in various fields. It seems many students here are also hoping to minor in online dating and pick up a date a Tinder.

Tempe is home to Arizona State University, which is one of the largest public colleges in the country in terms of overall enrollment numbers. In fall 2016, ASU enrolled nearly 72,000 students who took classes on its metro campuses. Our Google Trends assessment of these students’ search histories revealed they’re interested in hitting up a date while hitting the books. Tempe had a score of 78 out of 100.

Arizona State University in Tempe has one of the largest undergraduate populations in the U.S.

The median age in Tempe is 28.5, which is ripe marrying age. Arizona’s average marrying age is 28.4. A lot of people assume Tinder is only useful for short-term hookups and casual dating, but a 2017 survey revealed that Tinder users between 18 and 36 are more likely to be looking for a committed relationship than are offline daters.

Tallahassee is another college town with a relatively young population. The median age is just 26.5. Florida State University may not be the largest university in the state, but its students are the most enthusiastic Tinder users in Florida. Google Trends scored Tallahassee a 78 out of 100 in terms of overall Tinder searches.

Say what you will about the Noles, but they’re serious about finding a date in Tallanasty. The state capital naturally attracts educated and ambitious individuals who will do whatever it takes to seal the deal. Many Tallahassee residents have a love-hate relationship with Tinder and view it as a necessary evil of singledom.

One Tallahassee native defended Tinder on Reddit, saying, “as a young professional who has recently dipped back into the dating world, I’ve actually found Tinder much more conducive to meeting people and setting up actual dates. These apps/sites are what you make of them really.”

Madison is home to the Wisconsin State Capitol Building, the University of Wisconsin-Madison, and over 247,000 residents. The city is the second most populous city in Wisconsin, and it has the second most active Tinder user base in the Midwest. Madison scored a 75 on Google Trends’ 100-point scale of Tinder searches.

Young and single Wisconsin Badgers are likely driving Tinder’s local popularity. While the city’s median age is a respectable 31.2, Mad Town (as the kids call it) is home to a sizable young population at the university. UW-Madison is home to over 44,000 students. When not hitting the books, many of these students are online hitting up local dates.

Boston is, surprisingly, the only New England city on our list. Beantown may have been founded on Puritan values, but today’s residents aren’t exactly saving themselves for marriage or shy about looking for a date. Boston scored a 72 out of 100 when comparing its Tinder searches to that of other cities.

A Boston Herald poll found that 59% of residents think Boston is a good city for singles. The median age is 32.1, and over 68% of residents are single. That’s a huge dating pool in a big city, so it makes sense that many Boston singles would use Tinder’s swiping features to narrow their prospect down to the most viable candidates with the best photos of themselves on the Lawn on D’s swings.

Seattle is known for its rainy days, coffee houses, and grunge music, and it has also ranked as one of the loneliest cities in the U.S. Seattle has a total population of 608,000 people, and approximately 117,00 people live alone in Seattle — probably drinking coffee while forlornly watching it rain outside their windows.

Tinder offers Seattle singles an escape from loneliness, and many have taken it. Google Trends assessed local searches for the Tinder dating app and gave Seattle a score of 72 out of 100 in comparison to other cities.

Despite the cloudy weather, the forecast for Seattle singles isn’t so dreary thanks to online dating.

Tinder has an overall favorable impression among Seattle’s active daters. “I figured Tinder was a good way not to keep dating my friends,” said an 18-year-old Seattle single, who’d recently gotten out of a relationship. “There’s all these new people in town I wouldn’t meet otherwise.”

As the home of the University of Arizona, Tucson is bound to have an active dating scene. This public institution has a total undergraduate enrollment of 34,153. Pima Community College and the Pima Medical Institute in Tucson also contribute to the youthful vibes about town. The median age in Tucson is 33.4, but the bar-hopping crowd down on Sixth Street tell a different story.

Tucson sees a high concentration of Google searches for Tinder. The city scored a 67 on the Google Trends comparative scale.

Want to get an up-close and personal look at Tucson’s Tinder scene? Then you should do a little digging online. The Tinder of Tuscon Tumblr page is full of awkward, idiotic, and downright hilarious profiles posted by guys who, well, are doing their best.

Portland is the largest city in Oregon. In 1899, a local newspaper dubbed it “the city of churches,” but locals these days fondly refer to Portland as “Beervana” because of the high concentration of breweries downtown. Singles here enjoy drinking craft brews and mixing things up on Tinder. Portland residents search for Tinder at a comparatively high rate, scoring a 65 out of 100 on Google Trends.

Women outnumber men in Portland, which has an unbalanced gender ratio of 100:156.

Although Portland isn’t exactly a young city (the median age range is 36.8), it has a large number of unmarried residents. An astounding 57% of Portland residents are single, which is 20% higher than in the rest of the state. Portland millennials also have the highest divorce rate for their age group, contributing to 3.9 out of every 100 divorces in the city. At least they have plenty of breweries where they can drink away the pain, download an app, and start again.

We evaluated Google Trends data over the past 12 months (2/8/18 – 2/8/19) for the “Tinder App” and filtered the results by “cities” including low-search volume areas to get the highest per-capita results. Results are based on a 0 – 100 score rating.