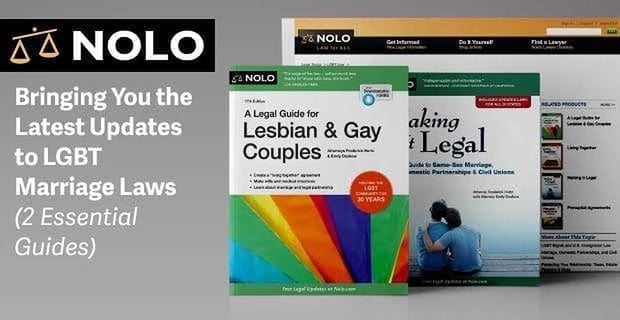 The 411: Since 1971, Nolo has been known for its do-it-yourself legal books and software, breaking down complicated laws and jargon for the masses, particularly in the LGBT space. With the Supreme Court ruling that same-sex marriage is now legal in all 50 states, Nolo helps keep us in the know with updates to two of its most important marriage and domestic partnership guides.

History was made on June, 26, 2015 as the Supreme Court legalized same-sex marriage nationwide. It’s a huge milestone for the LGBT community and the United States as a whole, but with this milestone also comes many changes and questions, especially from a legal perspective.

What if a judge refuses to issue you a marriage license based on your sexual orientation? What if you want to adopt children or get a divorce?

Don’t worry — you won’t have to answer these questions all on your own. That’s where Nolo comes in.

Thanks to the books “A Legal Guide for Lesbian and Gay Couples” and “Making It Legal: A Guide to Same-Sex Marriage, Domestic Partnerships and Civil Unions,” the Internet’s legal giant is able to deliver the most up to date information in an easy to understand way.

We spoke with Lina Guillen, Attorney and Legal Editor at Nolo, and Frederick Hertz, co-author of the guides, to get the scoop on the latest updates, as well as their expert insights on what the ruling means for LGBT couples and society going forward and the importance of knowing and exercising your rights.

Note: We’ll start with “A Legal Guide,” but if you want to jump down to “Making It Legal,” click here.

“A Legal Guide for Lesbian and Gay Couples”

This guide helps LGBT couples define and protect their relationship in the eyes of the law.

While originally a large goal of the book was to help same-sex couples live together as if they were married (in order to get around discriminatory laws), it also offered advice for how couples who don’t want to get married can protect their rights and be treated just like heterosexual couples in situations like adopting a child.

For example, Mississippi and several other Southern states do not support joint or second-parent adoption for same-sex couples.

With updates coming in Spring 2016, the latest version of “A Legal Guide” will cover:

You may have to wait for an updated hard copy of “A Legal Guide,” but you can always visit the LGBT Law section on Nolo.com for current news and tips. The Nolo team truly cares about providing users with the most relevant information in any way they can and as often as they can.

“The great thing about this book is that it has remained timely,” Guillen said. “For what’s happening at the time, the book addresses the needs of the lesbian and gay community in ways that other guides do not. The book has evolved along with the nation’s treatment of same-sex marriage rights over the years.”

Somewhat a new kid on the block, “Making It Legal: A Guide to Same-Sex Marriage, Domestic Partnerships and Civil Unions” is in its third edition. However, it is the only comprehensive guide to same-sex relationship laws in the U.S., discussing:

With updates coming in early 2017, the latest version of “Making It Legal” will cover:

Just like “A Legal Guide,” you have to wait a little while for the updated hard copy of “Making It Legal,” but that’s why Nolo’s LGBT section is always there for you.

As old laws are voted out and every marriage is recognized by every state in every aspect, it’s Guillen’s hope that “Making It Legal” will be converted into a marriage guide for all, with a chapter or two about remaining issues LGBT couples experience.

Beyond Reading: Taking Action in Your Own Life

With “A Legal Guide” and “Making It Legal,” it’s Nolo’s goal to empower same-sex couples with important information about life-changing decisions, but it’s up to you to put these tips into action and know how to exercise your rights when faced with discrimination.

“With the lesbian and gay community… it’s especially important to stay on top of the laws in each state.”

“I think for anyone who’s going into any sort of legal relationship — it’s great to take matters into your own hands and get the information that you need to make the right decisions for both you and your partner and any children you may have,” Guillen said.

Hertz added that instead of rushing off to the wedding chapel, homosexual couples should take the time to consider everything that comes with a marriage — for better or for worse.

“Most couples have thought of marriage as a matter of government and employer recognition of their relationship, so they can obtain the same benefits that straight married couples get. They haven’t paid so much attention to how marriage changes the economic relationship BETWEEN the spouses in ways that only become apparent in the event of a death or divorce,” he said. “Our primary focus has been to educate our readers as to how marital law works for their lives, so they can make wise decisions about getting married — or not.  As we repeatedly say, the right to marry is not the duty to marry.”

With same-sex marriage legal nationwide (prior to the ruling, it was only legal in 37 states), Guillen said it’s proof that the American people have spoken, and now more than ever is the time to keep that momentum going.

And while some civil workers, clerks and judges are refusing to issue marriage licenses based on religious freedom, Guillen expects those issues to dwindle down as the months and years go on.

“Even with the legal simplification, there is much to talk about.”

“Marriage equality isn’t based on a religious belief or an idea of what marriage means. The ruling solidifies the separation of church and state that this country was founded on,” she said. “I think most people in society understand that now, and I think the ruling just confirms what people were already feeling and thinking, which was there’s really no place to prevent people who are in love from getting married and having the same rights that everyone else does.”

In Hertz’s opinion, while it’s great that every couple now has the chance to decide how they feel about marriage based on their own wants and needs, and not be held back by legal inconsistencies that used to make these decisions problematic, we have to remember that we’re not out of the dark yet and the conversation needs to continue.

“Even with the legal simplification, there is much to talk about. There is no federal recognition for domestic partners or civil union registrants, and many couples have messy and unresolved agreements and/or registrations that need to be cleaned up,” he said. “Couples also need to consider whether they want to extend marital rights (and duties) retroactive to when they first starting living together as a couple, and those with children may need to resolve issue of legal parentage.”

To download or order “A Legal Guide for Lesbian and Gay Couples,” or “Making It Legal: A Guide to Same-Sex Marriage, Domestic Partnerships and Civil Unions,” visit www.nolo.com/products/marriage-domestic-partnership.