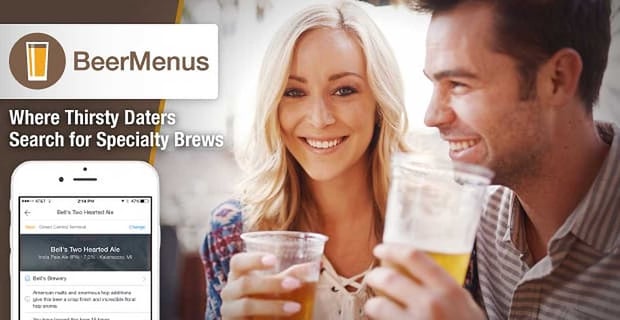 BeerMenus: Where Thirsty Beer Lovers Search for Specialty Brews to Liven Up Any Date Night

The Short Version: For anyone who’s ever hankered after a truly satisfying sip, BeerMenus offers a way to find the beer of your dreams and make your evenings out that much more enjoyable. The platform is a beer-specific search engine, mapping out events and locations that serve the choicest beer. You simply pick your preferred brew, conduct a quick search, and plan your next date night around the bars, restaurants, breweries, bottle shops and liquor stores, and festivals that carry your favorite beer on tap. If your date is picky about beers, you can easily go through BeerMenus to satisfy any craving for pale lagers, mild ales, spiced beers, sweet stouts, and so many more flavors and brands listed by over 29,000 businesses across the United States.

“Beer is such a magical thing,” said Gage Siegel, Success Manager and Social Media Robot at BeerMenus. “You find something you like once, and you’ll travel quite a ways to get it again.”

He would know. His first date with his girlfriend was spent traveling miles out of town to New Jersey in search of a particular Carton IPA she was eager to try.

The couple headed to BeerMenus.com to figure out where they could get the beer they wanted. Turned out it was at Carton, the brewery itself, so they set off on an adventure together. Gage and his girlfriend drove out of their comfort zones and created a lasting connection by sharing in an experience. Hunting down a hard-to-find drink is an exciting date activity for drinkers whose tastes run toward more uncommon beers and experiences.

On BeerMenus, you can search the menus of bars, breweries, and restaurants for their best beers.

Launched in 2008, BeerMenus is a complete resource of local beer offerings and events. Tens of thousands of bars, restaurants, breweries, and bottle shops and liquor stores post their menus to BeerMenus.com for beer lovers to peruse and find the keg that calls to them. Altogether, the site has more than 29,322 beer menus with over 141,255 beers. Whatever you (or your date) are craving, you can find it in a few clicks on the site. Or, if you’re looking for a more varied evening selection, the BeerMenus event calendar can give you your fill of festivals, tastings, and upcoming beer-related events in your area.

For drinkers on the go, the BeerMenus app provides a speedy reference guide to local craft beer. You can download the app on Google Play or in the iPhone App Store and begin searching your community immediately.

“With the proliferation of craft beer, there’s such an opportunity to always be going somewhere new and trying something new,” Gage said. “You can expand your horizons and find something to connect you to another person.”

In total, more than 10 million beer lovers come to BeerMenus each year in search of beer-related events, particular beer brands, or places to go on a beer run. For daters who like to plan ahead, the site offers an easy way to scout out the menu of a potential date locale. Over 29,000 businesses post and update their menus for free. All you have to do is type in your location and conduct a quick search for popular bars, restaurants, or festivals.

Part of the fun of the site is in the discovery of new places and new beers. Some members travel miles upon miles just for a sip of an uncommon beer, and they often bond with fellow beer lovers along the way.

“We always like to use the phrase ‘BeerMenus got me running,'” Gage told us with a laugh. “People have driven across the state for a beer on our menus.” The phrase came from a beer lover and fan of BeerMenus who tagged the site in an Instagram post about how a bottle shop near his office added his favorite rare beer to their list. He got a push notification from BeerMenus on his phone and promptly took off from the office to grab a bottle.

BeerMenus lists opportunities for daters to go out and drink their favorite brew with someone special.

The BeerMenus blog also suggests drinkers’ favorite beers (according to their search tabulations) so the online community can keep up with what’s trending. For instance, in the fall of 2016, BeerMenus reported Shipyard Pumpkinhead Ale received the most searches on the site by drinkers who clearly had Oktoberfest on the brain.

Even if your date doesn’t like the taste of typical craft beer, there are so many varieties out there to try, you’re bound to come upon something to satisfy. BeerMenus can help you in the search by highlighting unusual beer menus or local beer fests to try out and savor with someone special.

“If you didn’t share an interest,” Gage said, “it’d be a very one-sided relationship. Beer lets you connect over something in such a colorful community of people.”

Customize Your Beer Feed to Your Tastes & Plan the Perfect Date

From peppermint-flavored beers to barrel-aged Stouts, there’s always something new brewing on BeerMenus.com. Whatever you’re in the mood for, this site can locate the perfect beer to quench your thirst. You can follow your favorite beers (or your date’s favorites) to get notifications about upcoming events or menus featuring that beer. “That’s a great way to surprise your date and take them to a place they’ve never heard of or been to before,” Gage said, “but where you know their favorite beer is on tap.”

BeerMenus is a mobile-friendly platform so you can locate your favorite beers on the go.

BeerMenus serves up a diverse selection of kegs in places across the country, so the site’s users get a full understanding of what’s being offered where. Their map feature provides a clear at-a-glance summary of nearby breweries or restaurants, and all you have to do is click the pin to pull up the menu of their featured drafts.

From tap takeovers to beer tastings, the website and app directs daters to superb beer-focused events and places sure to whet anyone’s appetite.

“With such a variety of beer styles and breweries and bars and places to go,” Gage said, “you can always find common ground around beer.”

A Hardworking Team of Beer Enthusiasts Toast the Community

BeerMenus is headquartered in New York City but has team members spread across the U.S. in Colorado, Pennsylvania, and Florida. Wherever they are, team members actively engage with beer sellers and beer lovers in their communities. BeerMenus encourages employees to go to their own listed events to meet the people they serve. They’re passionate about contributing to beer culture and helping in breweries, bars, and festivals across the country.

“The best thing about our culture is we’re encouraged to get involved in the local beer scene,” Gage said. “We’re all beer people, so we’re happy to do that.” Just a few weeks ago, he explained, a few team members piled into a car and traveled upstate to Portland, Maine, for a taste of something special.

The BeerMenus team seize every opportunity to engage with the beer community across the country.

BeerMenus.com is constantly expanding tools and listings to ensure the site has the cream of the crop. Their goal is to elevate the local beer scene with prime recommendations at the fingertips of drinkers everywhere.

Currently, BeerMenus is developing a new feature called Explore to connect local experts and local events with the site’s visitors. This resource can inform and assist anyone planning a memorable experience centered around drinking beer. That way, daters can get their drink on that much sooner!

To plan a smooth night of drinking with your date, you can search BeerMenus for unique beers and specialty kegs near you. The site often inspires beer drinkers to embark on adventures and explore new places that sell top-notch brews.

“We help you to find the beer you’re looking for so you can plan your night out,” Gage told us.

Gage and his girlfriend bonded as they shared a rare treat in one another’s company, and BeerMenus encourages other beer lovers to come together for an evening of fun at breweries, bars, restaurants, festivals, and events focused on beer. Using the site’s listings, singles can clink glasses with like-minded people, and couples can connect over a special drink.

BeerMenus tempts visitors with malty, creamy, bold, sour, bitter, fruity, and flavorful concoctions in thousands of taps from coast to coast. Something new is always on the horizon, too. Soon, the site intends to send out an email blast of specially catered events and menus for their members to enjoy.

“We want to highlight all events, all the time, for all the people,” Gage told us. “We help you to find the beer you’re looking for so you can plan your night out.”