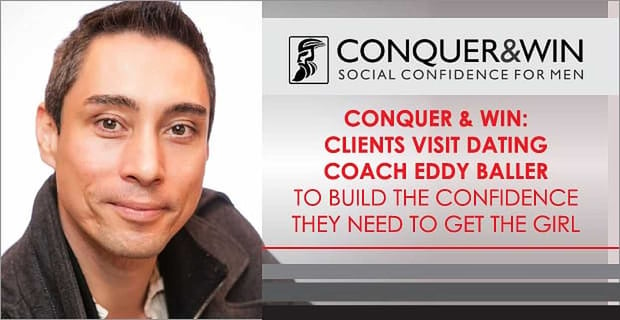 Conquer & Win: Clients Visit Dating Coach Eddy Baller to Build the Confidence They Need to Get The Girl

The Short Version: Some guys seem like they have it all: a great career, solid financials, friends, family, and hobbies. But what’s often missing is the confidence it takes to get the woman of their dreams. One of Vancouver’s top dating coaches, Eddy Baller specializes in teaching men the confidence-building techniques and social skills they need to approach women with ease, spark conversations, and get them interested. With long-term coaching, an informative podcast, and a book, guys can learn from Eddy how to get the girl of their dreams. And he’s expanding his clientele to help women soon, too.

I met a guy friend, I’ll call him Frank, in a class I took in college. Frank’s a brilliant guy — a computer programmer who went on to make quite a lot of money — and he’s also really nice, which is an attractive combination.

He would happily give me rides after class since I didn’t have a car. He even helped me transport my surfboard across town once. Frank was articulate, had many friends, and I thought he liked me. But I decided that couldn’t be the case because he never said anything. We were friends, and even though we were both single, that’s where it ended.

Looking back on the situation years later — and after many experiences with guys like Frank — I understand why he didn’t ask me out: He didn’t have the confidence.

A lack of confidence is quite common in guys, and many men struggle to approach women they are attracted to, much less engage them in good conversation and pique their interest. No matter if they just met a girl or have known them for a while, some men still have trouble showing their feelings.

Dating Coach Eddy Baller, Founder of Conquer & Win, helps men become more confident versions of themselves through long-term, one-on-one coaching, and other resources, including a popular podcast, his book, and website. Eddy teaches men the secrets to tapping into their inner confidence and developing the social skills they need to get the girl.

“Guys come to me when they’re getting out of a relationship, or they’ve divorced, or sometimes they just don’t have any experience at all, and they want to change that,” Eddy said. “At the beginning of the program, they may have rough spots, because there’s a learning curve. But as long as they keep going, they start to see significant results. These are life skills, and I’m excited to teach them.”

The confidence Eddy helps instill in his clients comes from strategies he has used in his own life. Over time, he has developed proven techniques and skills to help others who are in the same situation.

Eddy’s experience as a dating coach started when he took an introspective look at his own life and dating style. He figured out ways to improve his approach to both women and relationships in general.

“This started way back when I was in a bad place. I had depression. I had bad social anxiety and health problems. It was a bad recipe, and I wanted to feel good again. I wanted to meet women too,” Eddy said.

But before he could work on his approach to women, he had to take stock of his own life and why his happiness had been derailed.

“I had to start working on myself to get rid of the dark cloud over my head. Over the years, you start seeing patterns. You start to see with interactions with other people — what works and what doesn’t work,” Eddy said. “Of course, there were things directly related to my own character. And you project onto other people who you are as a person inside — so that changes the equation quite a bit, too.”

Once he understood how to change himself, he realized that other men could benefit from what he had learned, and it didn’t take long for the demand by others to acquire those skills prompted him to build a full-time career.

The guys Eddy works with are quite similar to my friend Frank. They may work in engineering, IT, or even own their own business. They’re smart, have strong careers, and are responsible adults. The problem is, they put way too much of their effort into their jobs, only later realizing that they’re missing out on love. That’s when they turn to Eddy.

“They’ve focused so much on the professional side of things that they’ve neglected the relationship side of things, so they come to me because they want to fill in that gap,” Eddy said. “None of these guys are weird, creepy, or anti-social, they’re just normal guys who are personable. They just don’t have the confidence to reach out to attractive women and get dates or relationships.”

“The more important stuff, like the mindset and daily habits, get incorporated over time. You build it into your life. You do it every day. It becomes more long-lasting and significant than doing something over a single weekend.” — Eddy Baller, Founder of Conquer & Win

When he works with guys in Vancouver, where he is based, he prefers they commit to a three-to-six month plan. Long-term coaching is more effective than fast boot camps because there’s only so much you can learn in a weekend, Eddy said.

“The more important stuff, like the mindset and daily habits, get incorporated over time,” Eddy said. “You build it into your life. You do it every day. It becomes more long-lasting and significant than doing something over a single weekend.”

Teaching Personal Development and Natural Conversation Through a Podcast and Book

So, what exactly are you supposed to say to women to get them interested? According to Eddy, that’s the question every guy asks him. But there’s no stock answer. The key is simply to talk naturally and be comfortable.

“I like to start with natural conversation outside of a bar environment, or party, or anything like that. More like if you’re on the street or in a café. I like to focus on those situations where you can start a conversation because opportunities like that present themselves every single day. You can start conversations with people, not just with other women,” Eddy said. “Being social in general helps your dating life. I like to focus on both personal development and social skills development.”

Eddy interviews interesting guests, including other dating coaches, on his podcast.

Guys can also listen to Eddy’s podcast on his website, which includes guests who discuss a variety of topics that are interesting to those who care about success both professionally and personally.

Discussion topics with fellow dating coaches range from how to negotiate to how to create an abundant love life. It’s a great way for his clients to become more well-rounded and hear other techniques and opinions.

Because Eddy’s clients are mostly busy professionals and don’t have time to waste, they need a program that works. As proof his coaching methods work, Eddy highlights the story of one UK-based client, who had a transformational experience.

“His goal when he first started was to date models. He was 25. Most people don’t have that kind of goal. But after four or five months, he is actually dating models,” Eddy said. “He’s at the point now where he can approach women, and he’s able to interact with them and gain interest. He was also looking for a relationship, and it looks like he may have found that as well. He achieved his goal.”

Eddy is also setting some goals on the business side. He’s in the final stages of production on an in-depth book to accompany his beginner’s guide to learn social skills, build confidence socially, and have better relationships. That book is currently available for his clients.

Plus, he has expanded to helping women. Because there are plenty of successful women, who are in the same boat as many of Eddy’s male clients — as well as my friend Frank.