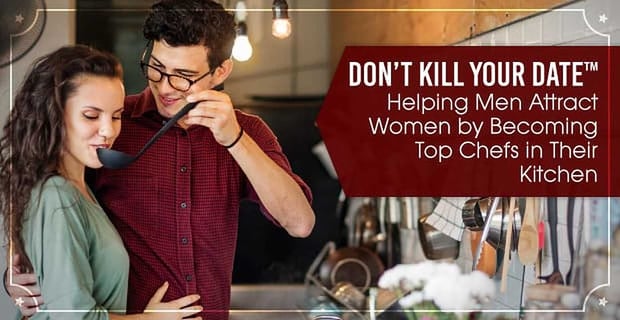 The Short Version: Combining easy recipes with expert advice, Don’t Kill Your Date (and Other Cooking Tips) takes the stress out of cooking and dating. Whether you’re cooking chicken marsala for your first date or roasted rack of lamb for your anniversary, Founder Spike Spencer’s meals are foolproof and tasty — and his tips are sure to help you attract women the right way, without any games or tricks.

The first thing Spike Spencer made for his now-wife, Kim, when they started dating was cassoulet, a French stew that’s typically made with meat and beans. This humble yet impressive dish not only satisfied her gluten-free diet, but it was also one of the reasons why he won her over. She loved the fact that he could cook.

But Spike wasn’t always so successful in the kitchen. Several years earlier, during his single days, he attempted to make a meal for a date — only to have her spit the food out because she was allergic to peas and nuts and forgot to ask if he had used those ingredients. Lucky for her, he hadn’t.

“You know, nothing kills a date faster than death,” he recently joked during a phone call. “It’s really a good idea, if you’re going to be cooking for someone, to ask them if they’re allergic to anything or if they don’t like anything. If you don’t, that’ll really soil the whole dating process.”

While this lighthearted situation is the inspiration behind the name of his site, DontKillYourDate.com (DKYD), a much more personal experience inspired the concept. During his first marriage, Spike discovered that his wife of 13 years had been cheating on him with his best friend. With no other family members to confide in and the divorce hitting his bank account hard, he was close to an emotional and financial meltdown.

“When something like that happens, you’ve got two choices: you give up on life or you fight. I chose to fight,” he said.

An actor for over 30 years, Spike turned this situation into an opportunity and moved out to Los Angeles to pursue his passion and start a new life. He also took this as an opportunity to reflect on what happened, take ownership for his part, and work on himself to become a better partner and person overall.

Cooking was Spike’s main outlet, but he also read as many dating advice books as he could, including John Gray’s popular “Men Are From Mars, Women Are From Venus.” Soon he built up the confidence he needed to get back out in the dating space.

Spike’s dedication and determination paid off, as he’s now a successful dating expert, using his 4 mainstays — food, humor, travel, and adventure — to teach men all over the world how to attract women and become the best person and partner they can be.

Whether Online or In Person, Spike’s Tips are Easily Accessible

Spike has been cooking since 1988 when he was in college, teaching himself how with “Betty Crocker’s Chinese Cookbook,” which used to be his mom’s. He made spicy sauteed cabbage, and it turned out so great that he’s been expanding his repertoire and cooking skill set ever since.

With decades of cooking and dating experience under his belt, Spike shares everything he’s learned with thousands of single men every year via recipes, articles, events, and even upcoming books like “Food Game: The Ultimate Recipe for Dating Success” and “The 10 MANsteps to Confidence (How to Become the MAN Women Want).”

Flambe, caramelize, julienne, braise — there are a ton of cooking terms and techniques that can be intimidating to new cooks, but Spike simplifies it all through his blog. Most of his recipes only call for 5 ingredients (or less) and come with pictures to walk you through the entire process, and his articles include basic rules and tips that are easy to remember.

Every recipe and article has a dating angle to them as well, in which Spike gives a reasoning behind why these dishes work and how to pull them off.

The most popular recipe on Don’t Kill Your Date (and Other Cooking Tips) is a Thomas Keller-inspired baked chicken and vegetables.

A fan-favorite is a Thomas Keller-inspired baked chicken. All you have to do is set a whole chicken on top of some vegetables, season it with salt and pepper, and put it in the oven. Not only is this meal affordable, easy, and, most importantly, delicious — but it’s also one you can adapt for your tastes and even by what vegetables are in season. Add a bottle of wine and light a few candles, and you’re set.

“You put all of that together and you’ve got a date for $10 that’s world class; it really is,” Spike said.

In terms of articles, “The Slow Cooker: Your Dating Secret Weapon” is one of the most helpful, especially for beginners. According to Spike, a slow cooker is the perfect piece of kitchen equipment because you can throw everything into it and let it do all the work. Another perk is the amazing smells will travel throughout the house, so when your date arrives, she’ll immediately feel excited and relaxed.

Spike’s acting specialty is doing voices for video games and anime, and he’s made a name for himself in that niche by speaking at conventions — a handy skill he’s transferred over into his dating work.

He also spent time attending conventions held by other dating experts to get an idea of how it’s done. Disappointed by what he saw, Spike set out to make a more positive impact with his advice — no manipulations or ploys needed in order to attract women.

“My advice comes from my heart. I’ve done these things and made more mistakes than most other guys, so I know what I teach works,” he said. “If you come across confident, strong, relaxed, and not a threat or a weirdo, women are going to be more attracted to you.”

As many as 1,000 people attend Spike’s speaking engagements, including a large amount of women. He likes to get their perspectives in real life to show guys that his tips really do work and that’s it’s OK to ask for help in their dating lives — whether that’s through experts, articles, books, or videos.

“They think it’s a sense of shame or weakness if they look for help outside of their pals, who are doing the same stupid crap. Most guys don’t know what they don’t know, and they don’t take the time to learn. Most guys will not go and read dating books,” Spike said.

All of Spike’s appearances are centered around the 10 Dating Pillars of DKYD, which include:

Have Respect for Women

Showing women respect, Spike said, doesn’t mean letting them walk all over you or doing everything they say. He simply means taking the time to try to understand them.

Most daters have gone back and forth with the whole “What do you want to do? I don’t know. What do you want to do?” situation. Spike encourages men to avoid wishy-washy behavior like this and always have a plan — since women are often attracted to men who are prepared and can make decisions.

Rather than going into every date with the expectation that it’ll lead to sex or she’ll be “The One,” Spike suggests just focusing on cooking a nice meal, being a good host, and getting to know someone new. Whatever happens, happens.

“Food, whether it’s good or bad, sustains us, so if you learn to cook good food and you’re good company, then you’re going to be attractive. Period,” he said. “If nothing happens, you’ve at least made somebody happy.”

While Spike has found happiness in his marriage with Kim and by cooking for her every day, it was a long and tough road for him to get to where he’s at. But overcoming his personal struggles — both big and small — has made him the person he is today.

His readers are also grateful for the lessons he’s able to share, such as showing them a different way to think about dating and giving them an easier, more natural way to connect with women.

“Cooking is more than just providing a meal. You’re doing something nice for another person. If you’re cooking her dinner, you can get to know her faster than any other way because you have a few uninterrupted hours of simply talking. It’s a very intimate process,” Spike said.

“You offer very sincere and emotionally-charged advice. For years I have felt as though no one can give me anything, and no one can can take anything from me, essentially no different than being dead. You proved that wrong. Your words cut through a lifetime of anger and detachment and brought me some clarity and focus. Words don’t yet exist that could convey my gratitude to you.” — T. Welch

“If you become confident in who you are with women, then you become better in business, life, with your friends and family. It really does change your entire outlook and perspective,” he said.

For more information, visit DontKillYourDate.com. You can also subscribe to the site on the homepage and receive Spike’s weekly “Humpday Hookup” dating tips.