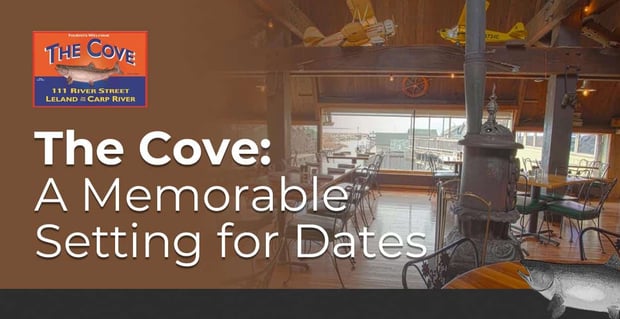 The Cove: A Picturesque Setting for Memorable Dinner Dates

The Short Version: After a day of touring vineyards, galleries, and boutiques in Leland, Michigan, couples often head to The Cove for a dinner date. The family-owned restaurant and bar dates back to 1968 and serves up delicious steak and fish dishes, as well as plenty of signature cocktails. Couples can grab a table overlooking the picturesque Manitou Islands or cuddle up at The Cove’s casual bar downstairs, and they may even choose to finish off date night with a slice of Michigan Cherry Pie.

Sometimes dinner is just a routine meal, but other times it can be a memorable experience that couples want to keep reliving.

The restaurant and bar is a perfect place to end a day of touring the area. The town itself is a romantic getaway, with only around 500 year-round residents. During its busy season, however, it’s a bustling area that’s worth exploring.

Leland, also known as Fishtown, is a historic town that overlooks Lake Michigan and the Manitou Islands. It used to be the epicenter of fishing for the region, but Leland remains a place to go for the freshest seafood around. People head to The Cove for signature dishes and homemade recipes that date back generations.

The Cove offers views from both below and above the Leland Dam and is situated at the head of the town. It is a go-to spot for dinner or drinks after a packed day of visiting the town’s wineries, galleries, and boutiques. So it’s no surprise that customers who have discovered the establishment tend to return repeatedly for milestones, including anniversaries, honeymoons, and engagements.

“We have people celebrating their 50th anniversary who have been coming to The Cove for most of that time,” said Sean Wanroy, Co-Owner of The Cove. “People have also gotten engaged here and come on their honeymoons. It’s one of those places that is a memory that gets ingrained in your mind over time.”

A Family-Owned and Operated Restaurant with a Long History

Sean said he’s grown up in the business, as his family purchased the restaurant in 1986. It originally opened in 1968, so it has a long history of people enjoying the food, cocktails, and views of one of the most beautiful spots in Michigan.

The customers aren’t the only ones who have been coming to The Cove for years. Sean said his team includes people who have been with the restaurant for many years.

The team also has some younger faces because it’s a seasonal establishment that closes down when it gets too cold. Many college students choose to work there during the summer months. The Cove enjoys hiring staff members from around the world, and many of its customers are visiting from other countries.

The Cove has a unique menu and beautiful lakeside atmosphere for couples on a date.

“It’s a summer destination for staff, too,” he said. “It’s one of the most popular tourist sensations of this area. It’s a unique small town.”

The Cove’s team strives to create an atmosphere that is positive and worthy of pride, from its hospitality to its homemade dishes. Sean said he’s at the restaurant every day, and If something isn’t right, the team will work to make it right. That’s because they want customers to feel just as special as the family who’s owned it for decades.

“It’s a family business, so we create a product we can stand behind, and we want to eat. We do. We eat there every day,” he said.

The Cove has enjoyed international fame on social media thanks to its Instagram-worthy cocktails.

One popular item on its menu is called the Chubby Mary. It’s a Bloody Mary with a major twist: Instead of just a couple of olives, a pickle, or a lemon as a garnish, it comes with an entire smoked fish sticking its head up from the bottom of the pint glass.

The Chubby Mary is one of The Cove’s most popular signature cocktails.

For Fishtown, it doesn’t get any more classic. The Chubby Mary is made with tomato and vegetable juices, Worcestershire, hot sauce, and spices — perfect for soaking up the smoky flavor of the fish. It’s great for hangovers and a story for friends back home.

“That’s part of the social media experience-driven travel,” Sean said. “Many people take a picture when they come here.”

The Chubby Mary is far from the only cocktail worth trying at The Cove’s upstairs sit-down dining experience or Rick’s Cafe, the lower level bar and more casual outdoor dining spot on the Leland River. The Moscow Mule includes ginger beer made from scratch.

The Cove also makes many of its ingredients and dishes in-house. It cuts its own French fries and makes sauces from scratch, too. Customers especially love its seafood chowder and whitefish, but The Cove is not just a fish restaurant. It offers plenty of popular steaks and featured dishes.

“The biggest thing about our menu is that we keep it simple but concentrate on the highest quality ingredients and make as much in-house as we can,” Sean said.

One of The Cove’s most attractive aspects for date night is that it overlooks the Leland Dam. It even has a 24-hour webcam, so people can enjoy the view even when they’re not there. From April to October, the restaurant is open for lunch and dinner seven days a week.

Sean said that last year was a challenge, but they’ve managed to stay strong thanks to the support from their valued customers.

“Continuing to get back to normal is a common theme,” he said. “I want to keep making adjustments to do the best job we can for people.”

Sean said his job is to keep the quality and experience high enough that his family can be proud of the work the team does every day. He said he also appreciates being part of a small-town community and serving guests who vacation there.

Leland, which is about 25 miles outside Traverse City, is close to the beach and has about 20 wineries. There is also a resort community nearby where people visit all summer long. Many of those people enjoy stopping in for a drink at Rick’s Cafe.

“A lot of relationships have blossomed here, and we get to be a part of a lot of milestones from engagements to honeymoons to anniversaries,” he said. “That’s why we do what we do.”