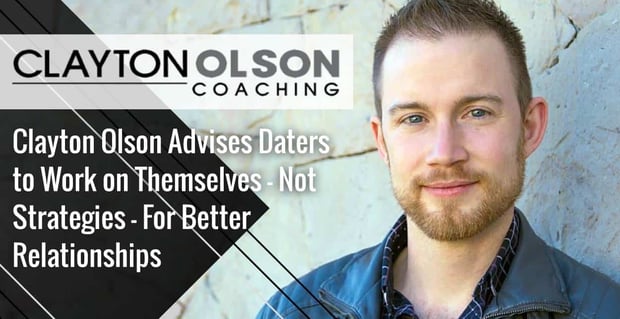 The Short Version: Veteran Dating and Relationship Coach Clayton Olson has been a popular voice in the industry since 2012. Over that time, he’s noticed a significant shift in the focus of coaching. What used to be quick-fix strategies for “winning” a partner have evolved into deeper, more introspective looks at how singles can improve themselves to attract others. Clayton sees many reasons for that shift, including a better understanding of narcissism among the general population. He also attributes that modern approach to the prevalence of online dating and an increasing number of coaches who focus on authenticity.

When Clayton Olson began working as a dating and relationship coach in 2012, he felt more like a consultant. Singles would mainly come to him for advice about things they could do to improve their success in love. He would offer insights and tips, but, over time, his approach evolved.

“At first, it wasn’t transformational. My growth has been learning how to help people create a space in which they can do the work to transform themselves. It’s a change in their lives,” he said. “It’s not about me having the answers and telling them things they can do. It’s allowing them to operate from a place of feeling whole and complete, rather than broken.”

That shift in mentality is also something that Clayton has noticed throughout the coaching industry, which he said he finds refreshing. In the early days, many coaches offered quick-fix strategies designed to “win” a partner.

Now, the most effective coaching strategies help clients recognize that self-love and inner work are vital components to finding a healthy, happy, and lasting relationship.

Clayton said many factors contribute to that change in approach. First, coaches understand more about how narcissism affects the lives of singles and couples. Second, the industry has grown significantly, which means more dating and relationship coaches.

According to Clayton, that dynamic has forced both coaches and clients to find a higher level of authenticity than previously seen.

He also attributes part of the shift to technology, and online dating has created new opportunities — and lessons — that can help people find more success in love.

Understanding Narcissism Helps You Learn From Past Hurt

Of course, narcissism has been around since mythological Greek hunter Narcissus fell in love with his reflection. But, today, more people understand its modern psychological repercussions.

That’s important for those who seek coaching after emerging from abusive relationships. Coaches need to understand those patterns so they can teach clients to release themselves from the self-doubt and negative self-talk that arise from being in relationships with narcissists.

Clayton said he’s worked to educate himself about narcissism and borderline personality disorder, or BPD, and he encourages other coaches to do the same.

“It can be life-changing for someone to hear narcissism named as a possibility, or giving the person who thinks they’re a victim a lens that they may have been in a relationship on the spectrum of BPD,” he said. “It can ground them in the reality that they’re not to blame and not a horrible person. They were just in a relationship with someone who was truly wounded.”

A big part of his work with clients is helping them understand that there is nothing wrong with them and that they deserve love. According to Clayton, when clients accept themselves, they can more easily be courageous and vulnerable in real relationships.

“I want to reinstate those foundational pieces back into people,” he said.

One way he accomplishes that is through his Facebook group. He invites women to join the group after they complete his webinar, “Relationship Ready — Becoming The One,” which he offers along with fellow coach Jack Butler. The six-week course dives into attachment theory, masculine and feminine polarities, communication techniques, and the male psyche.

Online dating has also exploded in the years since Clayton started working in the dating industry. While many coaches have noticed frustration from clients with online dating, Clayton believes that online dating offers opportunities for lessons and inner work.

On the one hand, online dating presents new ways for people who don’t like going out to bars to meet other singles nearby. More people are easily accessible, and connecting is convenient for people of all ages.

“But the other side is when people compare themselves to those who have orchestrated photos to look a certain way and put their best foot forward,” Clayton said. “I see a lot of clients who are hard on themselves, especially as they get older, and think that they don’t measure up.”

Clayton teaches people how to improve themselves before they seek lasting love.

Online dating can be especially challenging for those who are naturally critical of themselves. But Clayton works with clients (and offers advice on his popular YouTube channel) to help them see that dating profiles are similar to public relations campaigns that don’t replace meeting someone face-to-face.

“At bars, I’ve seen men swiping on Tinder instead of talking to women because they might be rejected,” he said. “It can be very insulating for men, who feel they need to be bold to spark a meaningful relationship. Confidence can be a critical ingredient in making an authentic connection with someone.”

Another significant change Clayton has identified in the dating and relationship industry is the growing number of coaches on the market for clients. That’s because, in today’s economy, more people have the opportunity to work from home and travel. As a consequence, more people understand their roles as coaches. Clayton said that’s a good thing.

“The market will have more experts communicating ideas, and it will mature into a place of authenticity and vulnerability,” he told us. “We can teach people more self-development techniques and to accept themselves and be loved for it.”

While many dating and relationship coaches once offered superficial strategies for “winning” a partner, now they care more about teaching clients how to be their best selves. According to Clayton, that’s the strongest foundation for a holistic relationship.

He said he experienced that recently when a woman came to him for help through his Facebook group. She said she felt like she needed to break up with a guy because she thought she needed time alone to do inner work. But, with Clayton’s help, she realized that the relationship was the perfect vehicle to help her grow. When her boyfriend saw her rawness and realness, the relationship deepened.

“Creating a better relationship with yourself is the best thing you can do for love,” Clayton said. “It is directly related to the level of intimacy and the quality of the relationship. I want to find ways of communicating that in ways that allow people to focus on healing themselves and creating a love that lasts.”