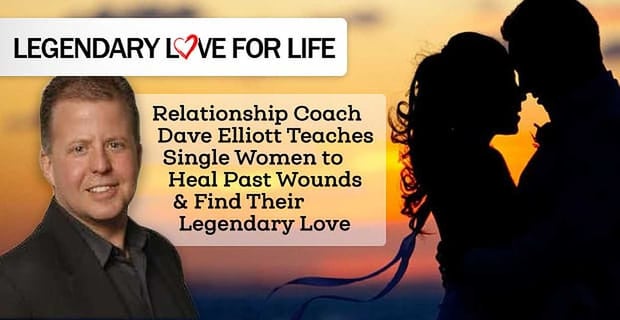 The Short Version: Dave Elliott has more than a decade of experience working with singles and couples on the deeper issues that strengthen relationships. He has developed his own proprietary tools and techniques, including his nine-step Man M.A.G.N.E.T.I.C.S. Formula, to give single women the clarity, understanding, and inspiration they need to change their approach to love and get game-changing results with men. The dating and relationship coach addresses a variety of topics — from the needs of masculine and feminine energy to online dating tips — and encourages his clients to date with confidence and compassion. As Dave points out, “Results don’t lie.” Over the years, his time-tested and proven strategies have helped an impressive number of women put an end to their struggles, attract Mr. Right, and build lasting relationships based on trust, communication, and appreciation.

Dave’s career as a relationship expert ironically began with the end of his first marriage in 1999. It was the pain and upheaval of that event that led him to the realization that there were things he didn’t fully understand about relationships. As a result, he discovered personal development and human motivational psychology and soon became hooked on learning how he could do better and make his next relationship work.

“I wanted to solve the problem,” he said. “Because that’s how men think. We want to figure out how to fix it.”

Dave Elliott became a relationship coach to take what he was learning and try to make it even more elegant, effective, and efficient.

While working in the personal development field, he met his partner and soul mate, a real estate investor from Australia. After living together and deepening their relationship despite a couple of periods of long-distance romance due to immigration restrictions, Dave and his wife, Katrina, are now married.

In addition to finding his own love and transforming his life, Dave has an impressive track record in helping his clients replicate that same success. As he said, “I had a vision, and it became my mission.”

That mission became Legendary Love for Life, a private coaching business, to teach women and couples the secrets to attracting and sustaining satisfying relationships. Together, he and his wife live their mission to “travel the world to touch, move, and inspire others to create their own legendary love for life — one person or couple at a time.” At this point, they’ve already brought that message to four continents in their travels around the globe.

This love and relationship expert teaches others to understand people on a deep level, and he helps them get the clarity, conviction, and commitment to create the kind of fulfilling and extraordinary lives they say they want.

“I see myself as a teacher, strategist, and counselor all in one,” he told us. “It all starts with awareness, and when people know better, they do better. I use my creativity to teach others to understand relationships and show up healed, healthy, and confident.”

Dave Elliott established Legendary Love for Life to help smart, successful women heal the wounds of their past relationships and attract loving partners. Through private coaching sessions, he readies his clients in their heads and their hearts so they know what to do and what to expect when entering a date. An important aspect of his coaching process involves helping women heal their unresolved wounds and let go of their past negative associations and disempowering beliefs.

When he meets a new client, Dave asks her to complete the sentence “Men are ___.” He hears all sorts of descriptions, many of them not so flattering, but he poses this exercise because it reveals more about his client than it does about men. He wants to discover their pain points and can give them new information that can create both healing and new opportunities.

Dave told us negative attitudes about men or dating can hold singles back from getting the love they deserve. “If you have unresolved rejection or abandonment issues, for example, you’ll tend to recreate that again and again until you heal it.”

Dave gives his clients an action-oriented dating system — aka the Man M.A.G.N.E.T.I.C.S. Formula — to help them get results in the dating scene. He has recorded informational videos that cover how to identify a keeper, understand gender differences, communicate your needs effectively, and attract Mr. Right. Most importantly, he coaches high-achieving women to know their own value because that’s going to attract worthy romantic partners to them.

If you feel stuck in a negative dating pattern, you can come to Dave to learn how to break the cycle and, as he says, “go from struggling to snuggling.” He believes his clients deserve a legendary love, and he’s with them every step of the way as they work toward that happily ever after.

“I want to work with people who are tired of the struggle and committed to having more,” he said. “They know what they’ve been doing isn’t working, and they’re open to a better way that works. Those are the clients who get incredible results and become raving fans.”

“Catch Your Match Formula” Explains How to Attract Dates Online

There’s no denying that online dating is the way of the future. It’s become increasingly mainstream, particularly among young daters, because it works. Dave said one of the greatest benefits of online dating is that it’s working 24/7 to get singles dates. While you’re at work or running errands, your dating profile is live and could be attracting that special someone to you.

Of course, you have to make sure your dating profile is sending the right message if you want it to be effective. Dave told us the trick to writing an attractive and memorable dating profile is painting a picture about who you are and what you bring to the table for a prospective partner. You have to brand yourself as a high-value partner who’s worth getting to know better.

Dave’s book “The Catch Your Match Formula” offers important guidelines on advertising your best qualities on a dating site and igniting interest among potential dates.

One widow had tried online dating before with disastrous results — she ended up getting a restraining order on someone. Then, after reading Dave’s book, she completely rewrote her dating profile and met her perfect match online two months later. They got married on November 4, 2017.

According to Dave, many online daters make the mistake of writing too much about what they want in a date — as in, only message me if you’re a bodybuilding doctor who likes to go sailing — when they should be focusing on what they have to offer that ideal person.

“The book was clear, concise, and written with heart and true spirit,” gushed D.P. in a five-star Amazon review. “Definitely resonated with me.”

“What most people don’t realize is your dating profile is an advertisement, and ads have rules if you want them to work,” Dave explained. The book is based on his experience as an award-winning ad copywriter before he became a relationship coach. “I help online daters brand themselves and talk about who they are and what makes them unique, special, awesome, or memorable.”

Dave often receives heartfelt testimonies and texts from clients who want to thank him for believing in them, supporting them, and giving them the push they needed when they needed it. So many singles have come away from his coaching sessions inspired to do the work and reach their dating potential. As a result, he’s gotten quite a few engagement ring photos, wedding invitations, and marriage announcements over the years. In fact, he was even asked to sign one client’s marriage license as their official witness.

Dave told us that just in the last couple weeks, his former clients have celebrated one wedding and three new engagements. “That’s a new record,” he said. “It’s amazing. I love it!” To celebrate and acknowledge his clients’ successes, he started featuring the photos they would text of their engagement rings in what he called his Very Satisfied Client Club.

“Dave is a special coach,” wrote Jennifer Conti-Davis in a testimonial. “[He] is able to quickly and accurately pinpoint areas in my thinking that were holding me back from finding the relationships I wanted.”

Jenny H. said she’d thought something was wrong with her because she was single. “With frustration in the air,” she said, “I heard about Dave, and, during the first consultation, he quickly changed my tone to hope and optimism to finding true love.”

Within a couples months of working with Dave, Jenny overcame her dating struggles and met Alex, who’s now her best friend and husband.

Another satisfied client named Bridget M. came to Dave when she was going through a painful divorce. His guidance helped her move on and meet someone who fulfilled her emotional needs. “I have felt so much love and compassion from Dave on my journey,” she said. “He helped me realize that I am worthy of this amazing love and man who I have in my life now.”

“I just help them heal and find their own value,” Dave said. “When women show up feeling confident and incredible, it inspires men to step up and become a better version of themselves.”

By Knowing Your Value, You Change Your Dating Patterns & Results

Nearly 20 years ago, Dave learned the hard way how important it is to understand and meet your partner’s emotional needs. When his first wife wanted a divorce, it was the wake-up call he needed to improve himself. He became a student of relationships and perfected techniques to establish rapport, communicate effectively, and show love and appreciation each and every day. Now he’s in a fulfilling relationship with someone who is committed to growing and learning by his side.

Dave is his own greatest success story, and his journey has given hope to countless couples all over the world. He experienced firsthand the difference a little knowledge could make in the quality and longevity of his relationships, and now he aims to pass on those lessons to as many people as he can reach.

“I realized that my thoughts and behaviors were pushing men away rather than drawing them to me because I wasn’t meeting their needs — which was all explained in the Man M.A.G.N.E.T.I.C.S. Formula.” — Jenny, one of Dave’s satisfied clients

If you’re searching for guidance on the road to love, Dave’s grounded coaching and self-help materials can point you in the right direction and inspire you to become more confident and competent in the modern dating scene. The relationship coach gives single women the tools they need to succeed, and then he stands back and watches them transform their lives.

“It’s ultimately about healing your own wounds and feeling like you’re in a good place. When you do that, men will see that and respond to it,” Dave explained. “When I help my clients discover exactly where and how they are self-sabotaging and then give them better tools, that’s when everything changes for them.”