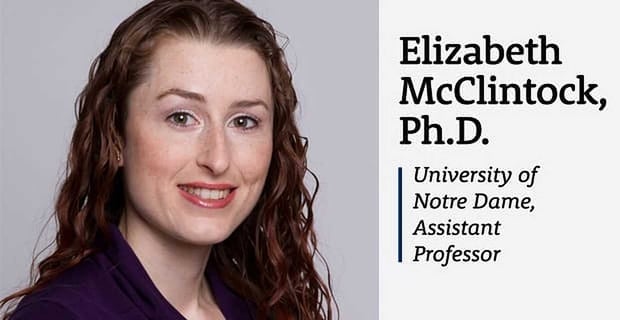 Dr. Elizabeth McClintock: How We Really Select Our Romantic Partners

TL;DR: Breaking stereotypes is Dr. Elizabeth McClintock’s bread and butter, and in her third year as an assistant professor of sociology at the University of Notre Dame, she’s only just begun.

But what she really shines at is debunking common myths within all of these topics, particularly when it comes to romantic partner selection.

While some sociologists seem to perpetuate relationship stereotypes with their work (like the amount of trophy wife and sugar daddy pairings out there), spouting out scientific jargon and abstract theories, McClintock strives to change that.

“They tend to forget that most people who get married actually like each other and have stuff in common,” she said. “These are people who have some kind of a real bond, so I was interested in bringing that back into sociology and rehumanizing the way sociologists look at relationships.”

Do we choose based on looks or money?

In her latest paper, “Beauty and Status: The Illusion of Exchange in Partner Selection?” McClintock challenges past research that suggests attractive women choose who they date and marry based on status (education, occupation, etc.) and vice versa. In a sense, people exchange beauty for status or status for beauty.

But McClintock found this wasn’t the case.

For this paper, McClintock evaluated data from a national survey that consisted of 1,500 couples. One partner, who was followed from adolescence through their early 30s, was interviewed throughout the study, while the other partner was interviewed just once, when the main respondent was in their early 20s. The interviewer also rated each partner’s physical attractiveness.

“Also, in many cases, a couple is both good-looking and high-status because people with higher socioeconomic status are better-looking on average.  They are less likely to be overweight, and they have money for dental care, dermatology, gym memberships and so on,” McClintock said. “Couples are matching on both beauty and on status so that they are similar on both measures (and they are probably similar in lots of other ways, too.)

The main goal McClintock really wants to accomplish with this work is to make people think about beauty and status differently and question the stereotypes and generalizations they see every day.

“I thought it [this research] was important because it breaks down that stereotype that women are valued only for appearance and that their accomplishments, their education, their jobs — that doesn’t matter at all,” she said. “To some extent, it also breaks down the stereotype that men’s looks don’t matter, which I think is untrue.”

How does race place a role?

McClintock’s upcoming publication also looks extremely promising and is a follow-up to her beauty and status work, as she’ll be studying interracial couples to reveal the truth behind how race affects mate choice.

Prior research has shown Caucasians will only marry minorities if they are of a higher status or are more attractive than they are, but McClintock doesn’t find this to be the case.

While some sociologists consider this type of relationship a mercenary exchange — a woman’s beauty for a man’s money or vice versa — McClintock wants to show people that these are real couples and real relationships.

“I hope it will get people to drop some of the stereotypes that they have — gender stereotypes , stereotypes about interracial couples — and to think outside the box and to remember that most couples are actually good together because they have a lot in common and they like each other,” she said.