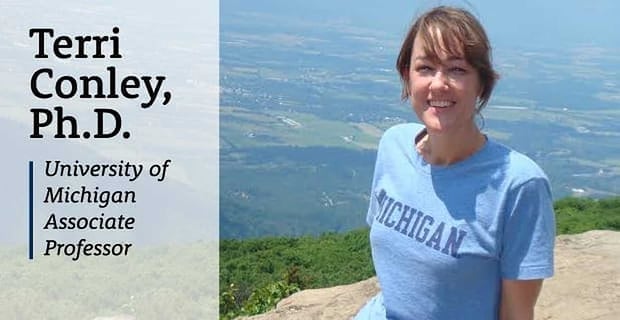 TL;DR: Having researched women’s studies and psychology since 1991, University of Michigan Associate Professor Terri Conley, Ph.D., is a leader in the field and has dedicated her life to examining these topics in new ways, particularly monogamy.

Growing up in a small Indiana town with a closeted lesbian mother, she saw firsthand the problems that existed (and still do) within gender differences, monogamy and intergroup relationships.

“I think issues of gender and sexuality, even though I wasn’t aware of it at the time, were influencing me,” she said. “I think I became very aware of those dynamics, and I wanted to explore them more.”

Conley used her personal experiences to build a thriving career she’s passionate about, where she spends her days closely researching these subjects and presenting her findings in a fun and informational way.

“Doesn’t everyone want to get paid to talk about and research sex?” she joked.

Conley, who’s been an associate professor of psychology and women’s studies at the University of Michigan since 2008, focuses on three major lines of research, which include:

While she’s an expert in all three of these areas, what’s really taken flight is her research about consensual departures from monogamy – a topic she said that’s seldom studied.

Conley’s research about consensual nonmonogamy is the first of it’s kind.

Conley describes consensual nonmonogamy as a form of commitment between a couple who decides, whether separately or together, to have more than two people in the relationship, whether for sexual or companionship purposes. A polyamorous relationship is a good example of this.

“Sometimes the pillars of our current culture are that monogamy is the best, monogamy is the best way to approach relationships, so it’s a firmly held core belief. By challenging that, we’ve threatened a lot of people, but again nothing is to say monogamy is bad,” she said. “It’s just suggesting that for some people in some circumstances, there might be a better pathway. I think that will be really good for people to get different perspectives on how people date.”

Conley’s main objective with her research is to remove the stigma that surrounds nontraditional relationships, to help people realize that there are other commitment options out there and to start an honest discussion about the topic.

“We find that people don’t necessarily agree on their definitions with their partner about what monogamy entails,” she said. “A very common reaction is one lapse from monogamy means you’re a flawed person, and I think that’s pretty troubling and pretty unfair. Even little things like that I think might go a long way to sort of relieving this tension and this pressure to be perfect at monogamy.”

With a hardworking and creative head on her shoulders, I see nothing but a bright future for Conley.