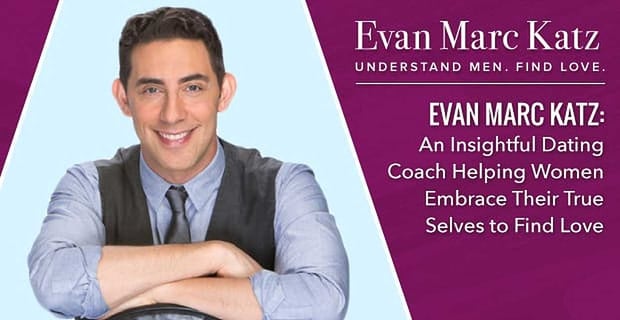 The Short Version: Over the past 14 years, Evan Marc Katz has listened to and learned from women who have dated men who leave them hurt and jaded. He draws on those experiences to offer dating and relationship advice on his blog and through his books, including “Why He Disappeared” and “Believe in Love.” Despite the unique backgrounds of every woman who has joined his email list, read his blog, or signed up for his coaching over the years, Evan has discovered some common themes in their approach to dating. Years of bad dates had skewed the way they perceived men and relationships. In 2015, Evan launched Love U, a six-month video course that walks women through the process of building confidence so they can find the lasting love they want and deserve.

Your key slides into the lock, and you turn it to let yourself in. Flicking on the lights and moving toward the couch, you slump down in the usual huff that follows another first and last date with a man who just isn’t right for you.

For the intelligent and independent woman seeking a man of equal stature to stand by her, Evan Marc Katz has some advice — be the CEO of your love life. A CEO — in Evan’s terminology — operates from a place of confidence and abundance. She can sit back and observe a man’s efforts to pursue her and later decide if he’s a good long-term fit for her company, so to speak. Being the CEO of your own love life results in a lack of anxiety that makes the entire dating process much more pleasurable.

Fourteen years of coaching women means Evan has shattered a lot of myths, including the commonly accepted notion that most relationships are hard work. “Good relationships should be fundamentally easy,” Evan said.

He has seen it firsthand in his own life when, after 300 or so dates, he found his wife, a woman he describes as his North Star, and it was a completely different relationship than what he had previously experienced.

Evan draws inspiration from his own life, what he knows to be true about men, and the responses he’s received from his millions of blog readers and thousands of clients to create the kind of content that helps women find happiness in themselves and therefore their relationships.

Channeling a Passion for Writing, Evan Does More for Daters

A writer at heart, Evan got his start while studying screenwriting as a grad school student at UCLA. He wasn’t hitting it as big as he wanted to in Hollywood, so, to help pay for his education, Evan took a job as a customer service representative for a company he believed in and used himself — JDate.

After hundreds of dates and multiple tweaks to his own approach to online dating, Evan felt he could provide real help to JDate users. On call after call, Evan realized the problems people were experiencing were not always what they seemed. A call to customer service for a forgotten password indicated to Evan a larger issue of the caller not using the site regularly enough to be an effective dater.

Evan would offer tips to callers who expressed frustration with online dating, and his advice was received so well by callers that he eventually asked JDate if he could become “The Date Doctor” and offer an official, additional service for those who wanted more help than a typical customer service rep could provide.

“They said, ‘No, just shut up and answer the phone,’” Evan laughed, but his passion for advising singles had sparked. He started an online dating profile writing business, e-Cyrano, and wrote a book in the fall of 2002, about two years into his work with JDate, called “I Can’t Believe I’m Buying This Book: A Commonsense Guide to Successful Internet Dating.”

Evan Marc Katz has written four books on dating, drawing on the experiences of his coaching career.

The success of his first book, which was reviewed by Time Magazine, followed by a feature in USA Today and a segment on CNN, propelled his profile writing business and led him to become the unofficial “Online Dating Guy.” Soon, though, his clients began asking for more — after the profile rewrite worked to attract new matches, they wanted to know what the next steps should be.

A few years into e-Cyrano, Evan expanded his services to accommodate their needs in the form of date coaching. By 2010, he had noticed that, while men seemed to need more help with dating, women were more likely to ask for the help. He realized there was more success for those who most wanted and best implemented his advice, so he’s been exclusively a women’s dating coach ever since.

Evan describes his clients as the kind of women who “have everything but the guy.” Most are between ages 35 and 50, with 70% having earned a college degree. In his straightforward yet compassionate approach, Evan said he tries to describe actions as effective versus ineffective — rather than right versus wrong.

He’s worked to reverse engineer what worked effectively for him to find the long-lasting love he was searching for so he can help others find love, too.

“Dating done right is not a waste of time. It’s a constant process of learning and exploration so you can make better relationship choices over time,” Evan said. “There’s an evolution between each boyfriend to get you closer and closer to your destination.”

As a self-proclaimed “personal trainer for love,” his process helps women gain the tools they need to be better, more effective daters.

Over the years, Evan has picked up on a few trends among some of his readers and clients. While each woman was unique, the story that brought her to him was often similar. In 2015, Evan developed Love U, an online course for women to dive into those similar issues and gain the confidence they need to not only meet men but understand them.

Love U is a six-month video curriculum that includes 30 minutes of content every week. Each month the course introduces a new topic — Confidence, Meeting Men, Dating, Understanding Men, Relationships, and Commitment — which Evan describes as “everything one needs to know to make healthy relationship choices and find the love you deserve.”

Reviews of the Love U program applaud Evan’s ability to provide a reality check, a male perspective, and judgment-free advice.

He said that after years of listening to women, he has developed a unique ability to communicate effectively what is and isn’t working about their approach to dating.

In addition to the four books he’s written and creating Love U, Evan still finds time to blog twice a week and produce a Love U Podcast every Wednesday. His audience of 9 million readers and 60,000 email subscribers help keep him going and inspire him to create more resources.

“Every time I send out an email, there’s another testimonial I get back of someone who is happier, who gained confidence, dumped the bad guy, got a better guy, and took more joy in the process,” he said.

We all have been on a bad date — or several — but that shouldn’t color our perception on dating, men, or ourselves.

Through his dating experiences before finding the perfect woman, Evan learned what a good relationship is supposed to be. Now he helps women realize the power they have to control how men perceive them and what they can do to be a better partner once they find a man worth dating.

“I would not be doing this job if I didn’t think I could help every single person who comes to me,” he said.