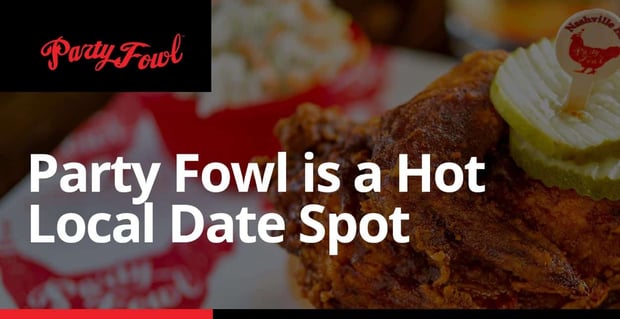 The Short Version: Party Fowl has made a name for itself as a full-service restaurant and bar with good grub, live music, and a party atmosphere. The kitchen serves Nashville hot chicken in a number of creative ways to take its flavors up a notch and give people something new to try. Couples can meet at Party Fowl for a mouth-watering brunch date, a boozy happy hour, or an indulgent dinner with plenty of dipping sauces to go around.

In 2013, Austin Smith and Nick Jacobson opened Party Fowl, a full-service restaurant and bar, to spice up Nashville’s downtown scene. Their goal was to create a fun space where people could kick back with friends and satisfy their craving for fried chicken.

Party Fowl has become a hub of flavor and fun in Downtown Nashville.

“We took Nashville hot chicken and served it different ways,” Austin told us. “We put it in nachos, salads, and sandwiches, and did lots of fun things to celebrate Nashville’s favorite food.”

Party Fowl gets its name from Austin’s local softball team — Party Foul — which has been playing games for 20 years. Austin and Nick met through softball and started a restaurant on a lark. Austin said he didn’t know if the venture would be successful, but he hoped it would bring people together.

Thanks to its dynamic menu, Party Fowl has caught people’s attention and seen many regulars returning for seconds. The restaurant and bar opened on a mission to put a fresh twist on classic dishes, and it has been hosting date nights, family dinners, and celebrations ever since.

Today, Party Fowl has locations in Downtown Nashville, Donelson, Cool Springs and Murfreesboro, so local foodies and tourists don’t have to travel far to enjoy this restaurant’s party atmosphere.

“I had no idea that six years later I’d have four locations and still be growing,” Austin said. “We caught lightning in a bottle. We had no idea how big this was going to be for us.”

The Menu Has a Little Something for Everyone

Party Fowl specializes in serving Nashville hot chicken in innovative dishes that leave a good impression on the taste buds. The restaurant’s executive chef Bart Pickens is from New Orleans, and he has a reputation for putting a fresh spin on well-known Southern dishes.

For instance, Party Fowl reimagined chicken and waffles as Hot Chicken and Beignets, and its signature bourbon glaze often has people licking their fingers with satisfaction.

Hot chicken and beignets is an indulgent dish that satisfies sweet and spicy cravings.

The kitchen serves classic Nashville Hot Chicken on Texas toast with coleslaw, but it also gets creative and incorporates the spicy chicken into street tacos, Cuban sandwiches, and Po’ boys. People really get a kick out of these one-of-a-kind dishes, and they can choose a hotness level ranging from Southern Fried to Poultrygeist.

“Hot chicken is king at Party Fowl,” Austin said. “That’s the centerpiece of the menu, but that’s not all there is. We want to have something for everyone on the menu.”

The Party Fowl menu has an array of salads, gumbos, and mild chicken dinners that are loaded with flavor. Big groups can order chickpea hummus or bourbon-glazed chicken drumsticks (the menu calls them Lacquered Lollipops) to start things off and then dig into in a pimento cheeseburger or hot chicken tenders.

If you’re headed to Party Fowl on a date, be sure to save room for dessert. Party Fowl has turned heads with its deep-fried fudge and banana pudding, both of which are perfect for a couple to share.

The food is the star attraction at Party Fowl, but the restaurant also has a lot of entertainment to keep people laughing and talking between courses. All Party Fowl locations have multiple television sets tuned to ESPN, and some locations have a skeeball machine and outdoor patio seating.

“It’s an all-around perfect neighborhood bar and restaurant. There’s arcade games, live music, trivia, and enough TVs to watch a ball game,” Austin said. “I wanted to put everything Nashville loves to do under one roof.”

Boozy Slushies Can Bring More Fun to the Table

The Booze and Brews section of the menu has many thirst-quenching options, including adult milkshakes, slushies, and frosé. Pro tip: Ask the bartender to “Float It” or “Load It” to get an extra fruity or boozy punch, respectively, to your cocktail.

Party Fowl also has Red Bull floater options available for an extra boost, and the Bourbon Bushwacker has the “Float It” option to add an extra splash of flavored whiskey or liqueur.

The bartenders know how to make a mean cocktail with fun add-ins.

The full bar also has 20 local beers on draft for beer lovers and “mules for days” cocktails for ginger beer lovers.

Consulting beverage directors Freddy Schwenk and Matt Buttel of Nashville Ice Lab helped concoct Party Fowl’s original boozy menu, and the bar’s mixologists are constantly coming up with seasonal favorites and specials to encourage people to get their drink on.

“Party Fowl’s bar lends itself to conversations and having a great time,” Austin said. “Our boozy slushies are so much fun, and there’s so much you can do to make it stand out.”

During its weekend brunch, many people make reservations and line up to enjoy Party Fowl’s unique brunch cocktails and home-style breakfast options. In 2016, Food Network named Party Fowl the best place to have brunch in Tennessee.

The Brunch for Two option is particularly popular among couples on a date. This signature menu item includes a 55-ounce Bloody Mary topped with two fried cornish game hens, two whole scotch eggs, eight fried okra, and an avocado. “It’s magnificent,” Austin said. “If you have a hangover, this is what you need in your life. This is the cure.”

Over the years, Party Fowl has been the backdrop for birthday parties, business lunches, bachelorette parties, and romantic dates, and it has gotten rave reviews from all corners. The restaurant currently has 4.5 stars on TripAdvisor and four stars on Yelp.

“My wife and I discovered this gem shortly after they opened their doors,” said Kevin C. in a review. “We were so impressed that we decided to make it our anniversary tradition…We will gladly trade fancy/expensive restaurants for a comfortable atmosphere with outstanding food and service.”

“We were blown away when we decided to pop in here for a late lunch/early dinner on Valentine’s Day,” said a Nashville woman in 2015. “They accommodated us no problem and we were in and out.”

As a popular date spot, Party Fowl has welcomed countless couples celebrating special occasions. One couple even got engaged during the restaurant’s Harry Potter trivia night in 2019. The place was full to capacity, and it exploded in cheers when the proposal happened and she said yes.

Stories like that are the reason Party Fowl opened. It fosters a community space where people can mark milestones in their lives and create memories with their loved ones.

“I love to see the smile on someone’s face and know we’re part of big moments in their lives,” Austin said. “We’ve made people happy, and that’s pure joy for us.”

Austin said he sees the Party Fowl team as one big family and is careful about hiring positive and good-natured people to uphold the restaurant’s fun-loving vibes. Not even a pandemic can get this team down. In 2020, Party Fowl has implemented safety measures, including mandatory masks for all staff members, so it can continue to serve hungry customers who want to enjoy a night out.

“The bottom line is we want to make sure everyone feels comfortable,” Austin said. “We don’t want to leave any room for doubt that our customers are our number one priority.”

Party Fowl Can Spice Up Any Date Night or Celebration

On Party Fowl’s opening night in 2013, Austin said he stood outside with his cousin Luke after everyone else had gone home and looked at his newly opened restaurant with pride. Luke asked what it felt like to be a restaurant owner.

Austin replied, “If I only break even for 30 years, but I get to do this — I’ll be the happiest man alive.”

Party Fowl started out as the dream of two friends in a softball league, and it has become a dating and social hotspot in Nashville. The restaurant is a fun setting for a first date or an anniversary celebration because any romantic outing is more fun when fried chicken and boozy slushies are involved.

Looking to the future, Austin said he has plans that will open new doors and grow the Party Fowl brand in Tennessee and beyond. “We’re about to start really moving,” he said. “There’s exciting things coming down the pipeline at Party Fowl.”